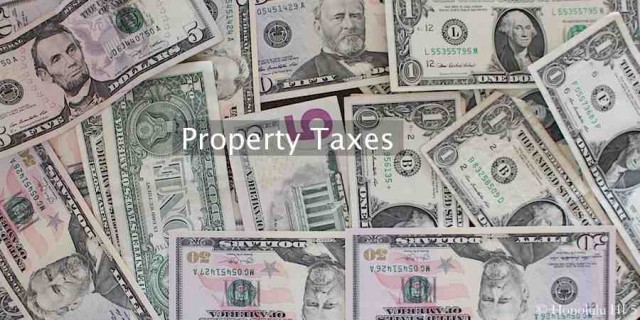 Local homeowners often sit down when they get the Honolulu real property tax bill in the mail. They don’t want to be standing in case they fall over in shock. Once they get the courage to open it. As sizable as that can be, it might be comforting if they compared to what their bill could be if they lived in a home of comparable value in other US cities. In some cases, the differences are staggering.

Before getting to the full comparison, it should be acknowledged that owning Honolulu real estate has one advantage immediately on America’s large cities and that’s simplicity of the property tax system. For owner-occupants, it’s a flat $3.50 per $1000 of assessed value, after you take off an exemption of $80,000 (owners under 65) or $120,000 (owners at or over 65) off that same value. Compare that to Chicago’s complex system.

You may want to read this next part slowly. In Chicago, the government comes up with a Market Value of your home. That number is then divided by 10 to determine what’s called your Assessed Value. After that calculation, the Assessed Value is multiplied by something called an ‘Equalization Factor’, which is currently 2.8056. Take the result from that calculation and subtract your Homeowner Exemption, $7000. Finally, you can now multiply that determination by their property tax rate of 6.396% (.06396). Simplicity itself.

Granted, that probably is the most complicated of the top 10 US cities (by population) you’ll see compared against Honolulu. However, none of the 10 can equal Oahu’s straightforward determination of your annual billing. Easy is good, but what about the most important factor – cost? How does property taxes for Honolulu stack up against the top 10 largest cities?

Honolulu Real Property Tax Vs America’s 10 Largest Cities
As you’ll see below, Honolulu’s property tax comes up ahead here as well. Dramatically. The next lowest, Los Angeles, comes in over 3 times more in taxes for a home of the same assessed value, while Houston is almost 8 times what the Honolulu homeowner pays!

This data was created by imagining an owner-occupant who’s under 65, is not a veteran and has no other special exemptions.

In all fairness, places like Dallas & Houston don’t have any state tax, so the hike there is offset by that factor. You’d probably have a larger home there than in Honolulu for the same value. However, places like New York City pile on their elevated property tax levels with extremely high state and city taxes. Your comparably valued NYC home is probably smaller, too. You get no relief in the Big Apple.

Overall, Honolulu looks very good if you consider what’s going on in other parts of the country. That isn’t to downplay the concerns of our homeowners, especially seniors, who have seen their property value escalate beyond anything they expected when they signed their mortgage 30 or more years ago.

While we do live with a higher cost of living than most, we can say that our property tax levels aren’t elevated. It’s one thing we can point to and say we’re actually doing better than the rest of the country. Hopefully that’s of some comfort at tax time.