Update on New Condo Projects in Kakaako & Ala Moana 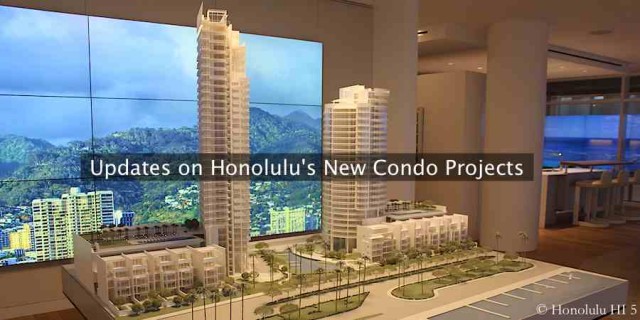 Update on new condo developments in Honolulu, including condos that have recently been built, those currently for sale and condos coming on the market in the near future in Kakaako and Ala Moana.

Video Transcription
Hi this is Kristian Nielsen with Honolulu HI 5 (company now called Hawaii Living). Today I’m going to review the new condo developments in Ala Moana-Kakaako. I’m going to review what has reasonably been completed, what is currently for sale and what we are expecting to go on the market for sale very soon.

First, in December 2014, we saw the completion of the luxury, 23 story ONE Ala Moana project located on the mountain side of Ala Moana shopping center. It was a project by the MacNaughton and Kobayashi Group, two renowned local developers in a joint venture with Howard Hughes Corporation. Then early this year, in January, we saw the completion of a high end project called Waihonua located in Kakaako, right in-between Hawaiki Tower and Koolani and right behind Nauru Tower.

Then moving further west, Howard Hughes started their developments of Ward Village, and they started in March 2014 the sales of Anaha and Waiea, Anaha being a luxury condo located on the old Pier 1 Imports lot, and Waiea being an ultra-luxury tower between Ward Center and Ward Warehouse in that parking structure. Anaha is about 85 percent sold out at this stage, and Waiea about 90 percent sold out.
Then moving further west, we move into Our Kakaako, which is nine pieces of land owned by Kamehameha Schools, who was the last land owner in Hawaii, but they’re not a developer. So on the old CompUSA lot they are having a project called The Collection which is a high end project. I would call it comparable to Waihonua, about 95 percent sold out. This is a project by Alexander & Baldwin, and they actually also did the Waihonua project.

Behind there is a project, a low rise called 400 Keawe, which is by Castle & Cooke, low rise, minimal amenities, around 60 percent sold out. And further behind there, on 500 South Street, we have a project called Keauhou Place, by Stanford Carr. They are about 50 to 60 percent sold out at this stage. Collection and Keauhou Place I would call high end projects, somewhat comparable maybe to Waihonua. 400 Keawe may be slight lower level, you could say, since it does not have the amenities.

Then, borderline of Kakaako, right next to Neal Blaisdell Center, sort of on the lot west of Neal Blaisdell Center on the same side of Kapiolani Boulevard, we have a project called Symphony, which I would also refer to as a high end project by Oliver McMillan from San Diego, about 90 percent sold out, very nice project as well.

Then we have also for sale now going back to Ala Moana on the Ala Moana Boulevard on the shopping center, another ultra-luxury project by The MacNaughton and Kobayashi Group as well, which is called Park Lane, pricing ultra-luxury and most of the units in the two to three thousand dollars price per square footage. It is seven low rise buildings, a hundred feet each, right along the western side of the parking structure on Ala Moana Boulevard, so several units have great views there. About 65 percent sold out at this stage.

Now, going forward to the next phase, what is coming next? What is coming on the market? Howard Hughes is next month, May, launching another ultra-luxury project called Gateway Towers. Gateway Towers is going to be on the current Ward Warehouse location. It is by a very famous architect called Richard Meier. It is a very high end, spectacular project. It will be two towers with a one acre park in between, and the first tower we call the Cylinder Tower because it has a round shape. That will be closest to Waiea, so on the east side of Ward Warehouse. That will go on the market first which will be 111 tower units and 14 villas.

Then we anticipate maybe in July, but nothing determined yet, what we so far refer to as the Whole Foods Project. It doesn’t have a name yet, so it’s a bit odd, but because there will be a Whole Foods flagship store in front of the tower, we refer to it as the Whole Foods Project. It will be on the old Nordstrom Rack lot, so immediately west of where Anaha is being built. It will have 466 units, studio to two bedrooms. We don’t have pricing yet but anticipation is in the $450 to $2 million dollar range, so a mid-priced type project.

Now moving outside further west back to Our Kakaako along Ala Moana Boulevard where we currently have a car dealership, two lots away from Ward Warehouse, there’s coming a project called Vida. Vida is going to be a luxury project by the MacNaughton and Kobayashi Group. It’s going to be somewhat similar in shape to Hokua, which has this perpendicular shape, and all eight units in Vida will be facing the ocean. So it’s single load, all units facing the ocean, with a private elevator between each unit. That project we anticipate coming on the market in May as well.

So a lot of things are going on in Kakaako and Ala Moana, existing projects and new projects, so feel free to reach out if you’re interested in learning more about these projects. Thanks for your time. Until next time, aloha.