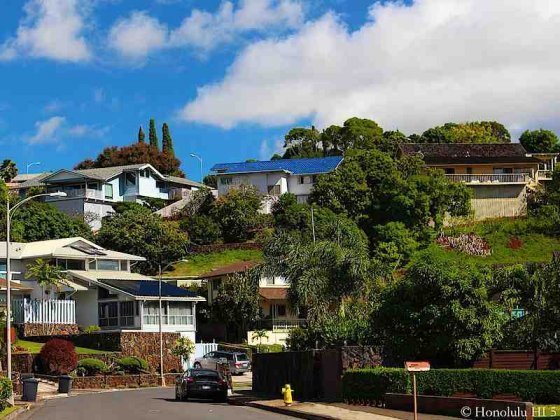 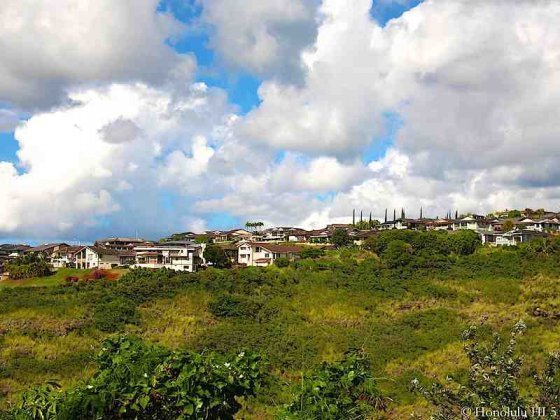 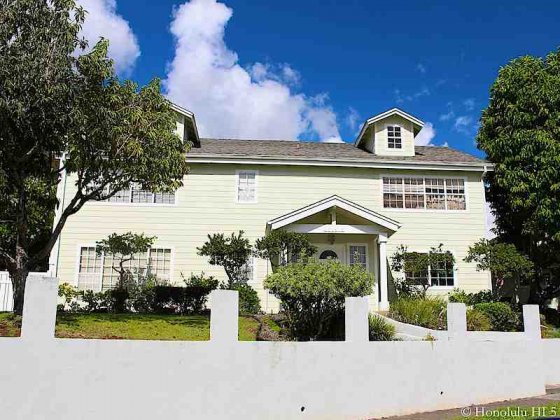 Aiea & Pearlridge are often lumped together in Oahu real estate surveys for the obvious reason that they are so close together. So much so that any dividing line set down quickly runs into trouble somewhere. There's no acknowledged definitive point where one becomes the other. In spite of that, the two are distinctly different, so your preferences in a home will make clear where you should be looking.

Frankly, the defining factor between the two is Time. Aiea is a product of the 1950's & 60's Hawaii, a period when the Islands started to truly boom in the wake of the post-war surge in America as well as Statehood. The mostly wooden houses you see on these streets today are from those years, built in the distinctive mid-century style that is modest, but rich in local charm.

The hill country that makes up this area was significantly developed during that time, finally coming to almost a complete halt since the late 60's. Individual houses have certainly gone up in the decades since, but no large-scale development has happened. It's a classic Hawaii neighborhood that has preserved the look of an Island era many find warm and quite irresistible in our age of high-rise glass towers.

Today, most Aiea real estate is valued in the range of $600K to $900K. The opportunity to own a house in this location, near so many amenities, yet in a place that still has the small town Hawaii feel, makes it a popular area to settle down. Its appeal is a consistent one, keeping sales brisk.

Pearlridge, you could say, picked up where Aiea left off. This part of Oahu took took the shape it has now in the later waves of expansion, beginning in the 1970's and going on for the next 2 to 3 decades. It unmistakably reflects the shift in residential emphasis that took place between the 2 phases. Where Aiea is primarily houses, Pearlridge real estate is dominated by condos and townhome communities. This is the denser, more modern counterpart to Aiea's vintage look and feel.

Pearlridge's homes tend to be more affordable than Aiea's, due to the makeup of the neighborhood. One main reason is their land footprint is smaller, built upward, rather than outward. The range of properties in Pearlridge falls mainly between the $200K to $500K levels. Newer isn't always more expensive.

The contemporary residences here are right in line with the Pealridge Mall that anchors the area. One of the largest malls in Hawaii, its 2 'phases' and connecting monorail fit right in this environment. Along with the surrounding big box stores and other shopping centers nearby, you'll find every need fulfilled from day-to-day essentials to luxury items. All of it within a quick drive or even walking distance. These factors make all of Aiea proper, which includes Pearlridge, a self-sufficient community. Outside of work, driving more than a few miles is rarely required unless the mood takes you.

There are three specific areas in Aiea / Pearlridge that deserve mention because their distinct character make them standouts. The first, Aiea Heights, sits high up the mountainside over Pearlridge, filled with houses that often include 3 to 4 bedrooms. You get great views over the greenery below and out to the ocean in the distance.

The second, Royal Summit, lies toward the western edge of the district, where Pearl City begins. As the name suggests, these are upscale houses built up in the hills during the early 1980's. Most are large luxury homes, some with 4 bedrooms, and residents enjoy a magnificent view of historic Pearl Harbor below. These are high-demand properties that don't often come on the market. Properties are commonly listed for $1M to $2M.

The last, Newtown is below and a little to the west of Royal Summit. The neighborhood is a community of its own, with its own recreation center and health club for residents. This is one of the newer developments, going up in the 1970's and 80's with a mix of houses and townhomes. In general, it is the most affordable of the three.

The advantages for those living throughout the Aiea / Pearlridge districts are many. Quick and easy access to all three major highways is a great place to be on an Island where traffic and travel time are constant concerns. H1 runs right through here and entrances to H2 & H3 are close by. Wherever you need to go, you're connected like few other places on Oahu.

Another factor that makes the Aiea area especially desirable for parents are the strong public schools and the close-knit community spirit & life it's known for all over the Island. Locals are deeply involved in the sports leagues, school groups and community organizations, at a level found in few other towns.

Many families have lived here for years, some for generations in the older Aiea areas. They've built a foundation that has benefits that cannot be measured, but are surely felt each and every day by those who live on these streets. It's no wonder this is a reliably hot market, even for Hawaii.

Though it lacks the beaches and waves that define Hawaii for outsiders, Aiea & Pearlridge possess what's truly best in local life. Neighbors who are actively engaged in strengthening the community. A place where many small, family run shops still flourish, keeping alive an important part of the Islands. The prime location between Metro Honolulu and emerging Kapolei, putting you where you can take advantage of the education, job and economic opportunities that will only increase in the years ahead.

In short, you have here the full menu choices in old and new Hawaii residences, every daily requirement available in easy reach and the boundless blessings of life in a place where your neighbors believe in contributing to the community, not just living in it. At the end of the day, some things are just more important in a home than beach access.


Aiea History
Aiea real estate was first organized under the Ancient Hawaiians' land division system, as one of the ahupua'a or districts which stretched from the mountains to the ocean. This was one of the more densely populated due to the fishing rights that came with living here. What is now Pearl Harbor was once a major source of the local diet.

The life here remained a simple one, fulfilling what many imagine Pre-Contact Hawaii to be – daily living centering around fishing and raising taro up in the hills with most living in grass huts. This would all be swept away with the arrival of Sugar as the Islands' major economic force in the mid to late 1800's.

Under that dominance, all of Aiea became just a single part of one of Oahu's major plantations. The whole was so big it covered the area from Honolulu Airport all the way to Pearl City and had its own railroad to transfer the harvested cane. The railway ended at a sugar refinery, which was located in Aiea itself. This was one of the only refineries in all Hawaii. Many of the other companies had to send their raw cane to the mainland to be refined there.

The land reductions eventually made the plantation unprofitable, but one important element did survive. The refinery stayed, continuing to do its work for years afterward, only shutting down in 1995. Only then was sugar's pivotal role in this town officially over forever.

The end of the plantation gave way to a new economic force, that of housing and development. The building boom of the 1950's and 60's utterly changed the face of the hills here, turning vast fields into neighborhoods, shopping centers and schools.

Pearlridge Mall's opening in 1972 cemented Aiea's arrival as a modern center for western Honolulu. The addition of the shopping center's Downtown expansion in 1976 made it twice as big and second only to Ala Moana in size. The condo towers that sprang up not long after around the mall reflected this shift even more.

Aiea real estate today is in demand, due to not only the easy availability of shopping and dining, but also its commuting advantages to the various military bases as well as downtown. Most attractive of all, though, is the community spirit of the residents who are actively involved in their children's schools and the life of Aiea itself. It would seem that the plantation may be long gone, but the close-knit culture of those times still prevails on its former lands.