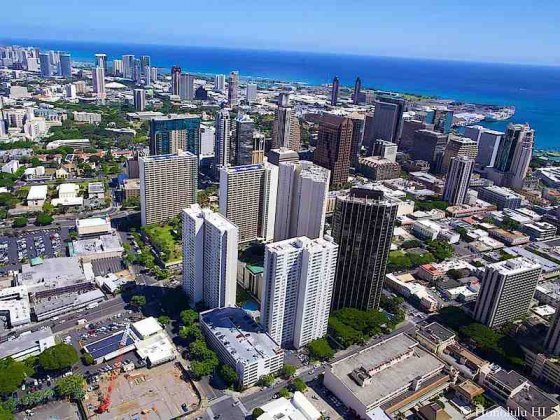 About Metro Honolulu
Metro Honolulu is the most urban of Honolulu real estate districts, taking in the major government, tourist and shopping areas of the Island. It's no wonder that this is also where the largest number of condominiums can be found as well. Just as it is everywhere, the center of employment opportunities has spawned a greater demand for housing nearby. That has created the need for the space-saving and better affordability that condominiums provide.

A search for Metro Honolulu condos will find listings in multi-story buildings across almost every one of its neighborhoods. In some cases, such as Salt Lake & Moanalua, the west end of Metro, certain areas are a virtual forest of these residences.

In the cases of both Salt Lake & Moanalua, many of those buildings went up in the 1960's and 70's, especially right along, and right next to each other, on Salt Lake Blvd. Newer projects were added in the decades since as more and more moved here, primarily on the lands further toward the mountains. With Hickam AFB, Pearl Harbor and Fort Shafter all within a few minutes drive, it's no wonder so many military and civilian defense employees seek out these units.

The large neighborhood of Kalihi, next door on the east, continues the largely paved environment of its neighbors. More affordable than many other neighborhoods, the residences here are located close enough to keep the downtown commute to a minimum. There's little that can compete on its price points within the same radius in any other direction from Honolulu's office district.

The other side of Downtown finds us in the center of a revolutionary community yet to be realized. The Kakaako condo projects, which will add as many as 30 new condo buildings between South St and Piikoi St, as general west and east borders, and Kapiolani Ave on the north. The southern end is Ala Moana Blvd and the coastline itself.

This development is a planned vision of urban pedestrian life, combined with green spaces and green technology. You'll stroll to shop and dine at a range of tantalizing choices, all within easy reach, while taking in amazingly designed landscaping and scenery. The cutting edge luxury of these condos, with panoramic ocean views that are already the envy of the real estate market, is just the beginning of the story.

If you kept going toward Diamond Head, you cross over into Waikiki's condos, where you'll get the feeling that high-rises have completely taken over this world-famous playground. That hasn't actually happened yet, but it's certainly well on the way. The buildings here are popular for being close to the action as well as providing excellent investment and income producing possibilities as vacation condos. The fact that their average size is smaller also makes many more appropriate for those temporary stays than long-term living.

Still, excellent views are common, with the Ala Wai Canal on one side of Waikiki and the ocean on the other, not to mention the bright lights that sparkle each evening as revelers hit the streets. You will pay more to live here than many other areas, but the ability to walk to the beach, to restaurants or shopping brings benefits of its own. For those who like a little spice, or a lot, this is the place to be.

The McCully & Moiliili communities, on the opposite side of the canal, put the brakes on from fast-paced Waikiki. That's quickly clear just from the fact that the average building height immediately plunges. There are certainly high-rises along their side of the canal, as well as a very few others here and there, but they stand out noticeably from neighboring structures. These are more traditional Hawaii neighborhoods where you'll find families who have lived here for generations, often in the same home.

It's a quieter life and many of the condo buildings fit that. A number are appropriately smaller in size, below the 7 stories Hawaii requires to define them officially as high-rise. McCully & Moiliili have held on to their intimate, locally rooted charms, most notably along King St where you'll find small, family run eateries and stores, which will always have a warm welcome ready for you.

Metro Honolulu has the greatest range of prices of all the Oahu districts, from the lower costs of Kalihi to the sky high levels of Kakaako's coastline penthouses. The desirability of being within easy access to the center of not only business and government, but the tourist industry as well, not just for the Island, but the entire State, is extremely high. The condos here, though, put you not only in the hub of activity, they also place you in what may be the future of Hawaii, as Kakaako redefines what life can be in this place. The costs are sometimes greater here, but the so are the opportunities and options, and that can be a deal maker in a home that's for your future as well.