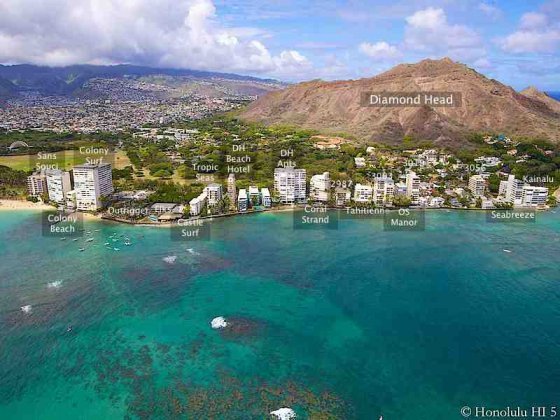 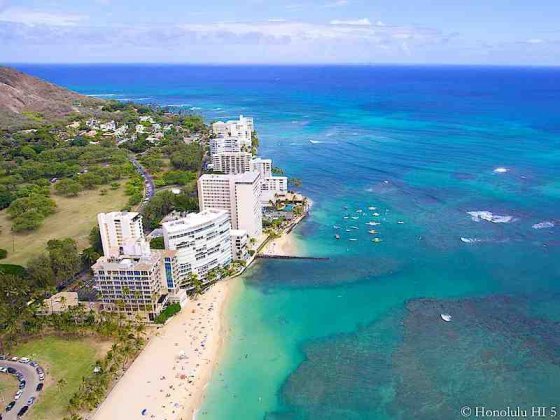 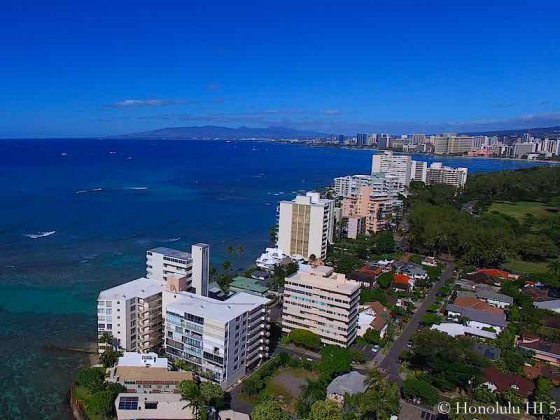 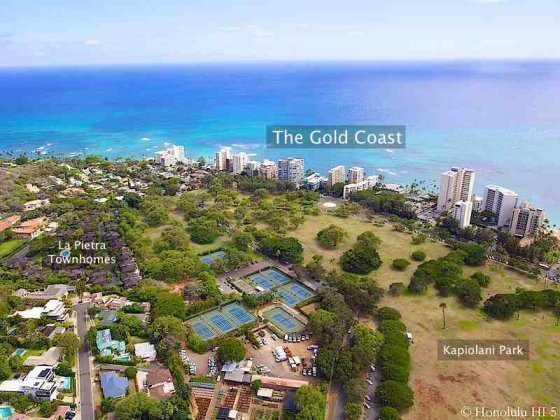 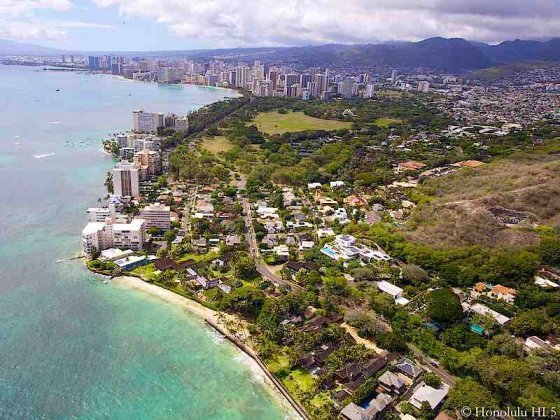 1) Gold Coast Condos: Group of direct oceanfront condos located at the base of Diamond Head along Kalakaua Ave, right next to the New Ohtani Hotel. See our video guide to Gold Coast condos. Gold Coast condos for sale typically range in price from about $500,000 for a studio or 1BR unit without ocean views to $4M+ for a beautiful 3BR remodel with the most idyllic ocean views.

More About the Gold Coast
The Gold Coast condos were built on the ocean's edge during the 1950’s and 1960’s and can never be recreated. These condos could not be built in the same locations today because of updated zoning laws and setback requirements. Those conditions have made the existing real estate along the Gold Coast irreplaceable. Forever limited, the condos remain special, rare and precious.

Nearby the Gold Coast, also at the base of Diamond Head is home to a small number of generous size townhomes worthwhile noting: Queens Court at Kapiolani, Diamond Head Landing and the gated La Pietra community.

The Seawall
Along most of the Gold Coast runs a seawall, which has been part of a controversy over the past many years. Who is responsible for its upkeep; the State of Hawaii or the Association's of the different condos? Litigation between the State and a group of 10 condo associations has been ongoing since 2006. August 2017 the Supreme Court ruled that the State has created an implied easement, since the public have had access the seawall for years. In conclusion it is our understanding the Supreme Court ruled there will be some sort of sharing in costs or repairs and maintenance of the seawall.

The Gold Coast Neighborhood
Diamond Head’s Gold Coast sit where the elite of Hawaii have come for centuries to revel in the matchless beauty that lies at the foot of this towering landmark. It is also Honolulu’s most storied spot for enjoying an unmatched lifestyle due to its one-of-a-kind oceanfront setting, offering eternally mesmerizing ocean, coastline and sunset views.

The neighborhood lies cozily beside Waikiki, taking in much of the open, green space of Kapiolani Park and extending eastward to include the stunning southern shore along the base of Diamond Head itself. Though cheek-to-cheek with Waikiki, the Gold Coast represents a different world from the crowds and condos in Waikiki. Here you live a more genteel, quieter lifestyle that reflects the ways of a classic Hawaii.

The private and upscale Outrigger Canoe Club is located in between the Gold Coast condos with 2 of its restaurants - Koa Lanai and Hau Tree Lanai - literally hanging on the ocean’s edge, separated by just a seawall with great views of Waikiki and beyond. The club also has a small cozy white sandy beach, exclusive for its members.

A stone throw away is the Kaimana Beach, another local favorite. The sand is perfect and less crowded than the prime tourist areas to the north. Swimmers love this beach, heading out to the open ocean from here for some world-class exercise and enjoyment. It's little wonder that the famous Waikiki Roughwater Swim begins from this spot.

Across the street from the Gold Coast condos is Kapiolani Park, a center for both ends of the activity scale. Local youth soccer games, triathletes doing intensive workouts and rugby tournaments are common sights alongside local families enjoying a leisurely cookout or the traditional luau celebrating the 1st birthday of a beloved baby.

Though the beaches and ocean aren't as easy to access as you progress from the Gold Coast further south around Diamond Head, your efforts are rewarded. Quieter, with fewer people, beaches here offer something special for those who want a little more solitude. These areas also provide more challenging waves. On most days you'll see a parade of experienced surfers heading down the trails from Diamond Head Rd to take on the swells that have earned a well-deserved reputation.

Comparable Condo Neighborhoods
There are no other condos in Honolulu with the ocean views and atmosphere of the condos along the Gold Coast. However, if you are interested in luxury condos, you may want to check out our Kakaako condos for sale page.

History
Diamond Head condos have had a great impact on Hawaii's recent history. During the 1950's the first high-rise residences began going up on the west side of this neighborhood. Overlooking the ocean, they proved very popular. Things wouldn't go so smoothly in the next phase, however.

In 1961 the City Council took up the question of changing the zoning to also allow high-rise condos in the area further to the east, specifically the area between the front of Diamond Head and the ocean. An uproar erupted immediately. What was most remarkable were the very strange bedfellows leading the charge.

The expected environmentally concerned citizens came out, of course, but joining them were the elite residents of Diamond Head, including Walter Dillingham. As one of the primary creators of modern Honolulu and several Island neighborhoods that didn't previously exist, he was a curious addition to an anti-development group. Still, it was his backyard this time.

He wasn't the only prominent name with significant development connections that now stood against these new Diamond Head condos because of how they could affect not only their lifestyle, but their view. The fight went on for years, getting coverage in Newsweek and Time and even an editorial in the New York Times. Finally, in 1981, the City Council froze zoning as it stood in 1961.

This fight kick-started the local anti-development movement that became very vocal in the 1970's and 80's. People now began to fight back against new construction in Hawaii as never before. It makes one wonder if some of those Diamond Head residents realized they were unleashing a force that they'd face themselves on projects elsewhere in the Islands.