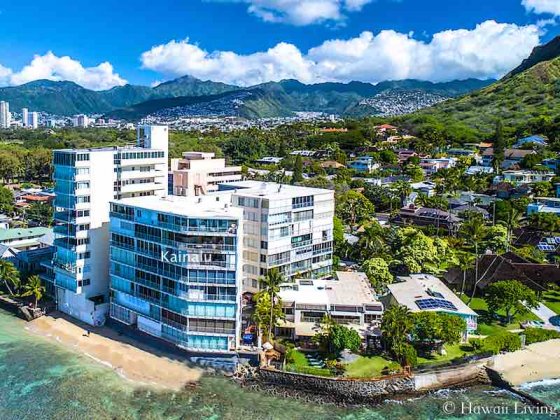 News
Kainalu association started seawall repair work May 2017 and was completed late 2017 It took more than 7 years to obtain all neccesary permits to get the work under way and owners are thrilled it is finally all done.

About Kainalu
The Kainalu condo isn't the largest or tallest of the Gold Coast, but it does have something very special about it. It's the last condo in that line of coveted buildings along the Pacific Ocean. When you live here you're in the quiet corner of the community, farthest from the noise and traffic of Waikiki. That doesn't mean you're too far away to enjoy the options there, though.

It might be a little farther walk than from other Gold Coast condos, but those Waikiki restaurants and entertainment spots are within a 10 to 15 minute stroll by beautiful scenery all along the way. Don't forget the beaches, like Kaimana & Queens that are part of your neighborhood, too. Not that you have to go very far to feel the sand beneath your feet.

Just below Kainalu is a smaller beach that you'll love visiting whenever you get the urge. As a resident you have a private staircase from the grounds, the bottom step right on the sand. It's just about the closest you'll come to a private beach on the Gold Coast.

The Kainalu condo units are good sized, especially when you factor in the lanais. The Studios alone have 165 sq ft of lanai space on up to the 356 sq ft on the largest 2BRs, which are on the south side. This is very important because all of that southern facing space looks out on crystal blue ocean for as far as your eyes can see.

As many know, these Gold Coast buildings went up before construction was required to be farther away from the coastline. So your Kainalu lanai is something close to a balcony overhanging the ocean itself. That's the dream and you can live it.

You may also be interested in....
Oceanside Manor, Tahitienne and Coral Strand.  Alternatively, expand to search all Diamond Head condos for sale or start broader with all Honolulu condos for sale.