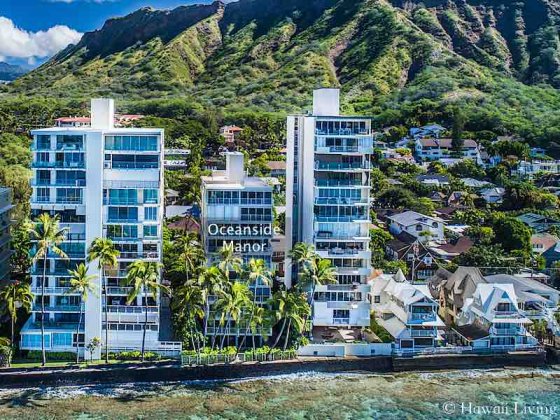 About Oceanside Manor
Located on the more quiet part of the Gold Coast and set back from the street, gives Oceanside Manor a very private feel. There are  just 2 units per floor and most owners having pushed out the narrow wrap-around lanai to maximize usable space, which falls just short of 1,100sqf of interior.

3 floors in Oceanside Manor - 5th, 7th & penthouse floors - have combined the units on their respective floor to create a large luxury condo. Since Oceanside Manor has floor to ceiling glass windows  that wrap around a good part of the side of each unit, these double units offer some of the most stunning views along the Gold Coast.

Arguably, the best views are in the "01" stack, which is the east / Diamond Head side of the building with neighboring 3019 Kalakaua not impacting the ocean views. For the "02" stack, neighboring 3003 Kalakaua is sticking out a bit, which means less views on a western angle, though south facing ocean views are nothing short of perfect.

Oceanside Manor has beautiful grounds and several palm trees are swaying right in front of the building on the ocean's edgen and several units get the perfect combination of swaying palm trees and ocean views - it is quite magical.

More About Oceanside Manor
When looking for an ocean view, fee simple, 2BR & pet friendly condo in Diamond Head, Oceanside Manor is one of the few possible options with several of the other ocean view buildings do not allow pets or, often times, are co-ops.  The condos at Oceanside Manor are divided with a north-south line, so both of the units on each floor have views of Diamond Head on one (master bedroom) end and those captivating blue waters on the other (living room).

If that weren't enough, these are some of the most unobstructed ocean vistas found in this exclusive neighborhood. Clearly, there are rewards to living here that most other residences on this popular strip of real estate cannot match.

That restriction of 2 condos per floor also means maximum space for you to live in, though some have found a way to even take that to new heights. Some fortunate residents were able to acquire both units, combining them into 1 huge oceanfront residence that are the envy of even their already blessed neighbors on the Gold Coast.

You can bookend each day with the sun coming up over Diamond Head in the morning and the sunset over the ocean in the evening. Seeing one on a regular basis would make your life a little brighter. Get both and you know you're having it all.

Your unit has sliding glass windows to open up your home to a better look outside or to let in the fresh tradewinds that blow so refreshingly in Hawaii. You might even hear the sounds of the surf that can soothe the most trying of days.

Life in the Oceanside Manor is a plunge into the calm elegance of communion with Nature at its best. With the deep vitality of the ocean on one side and the monumental presence of Diamond Head on the other, you're truly where living is a never-ending pleasure.