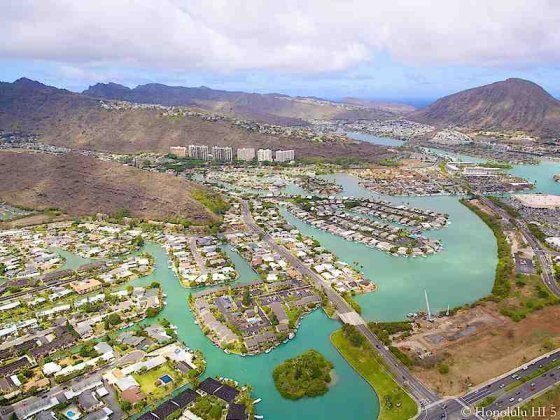 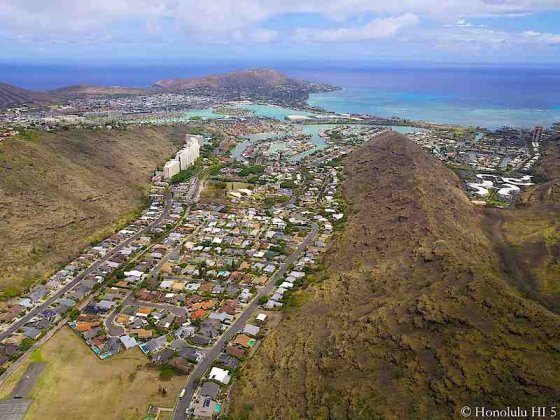 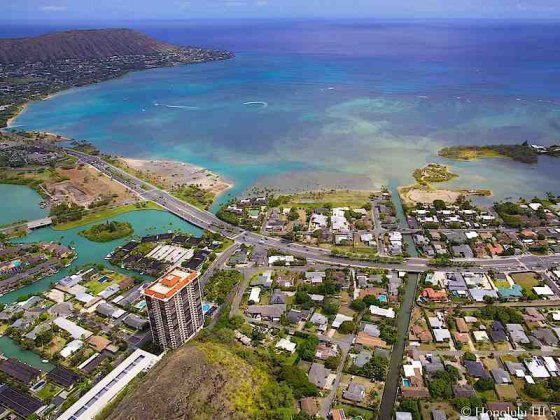 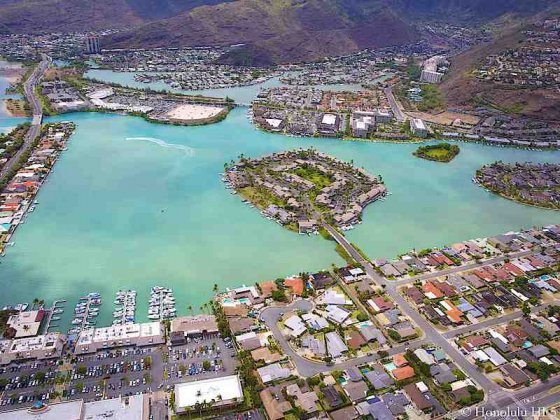 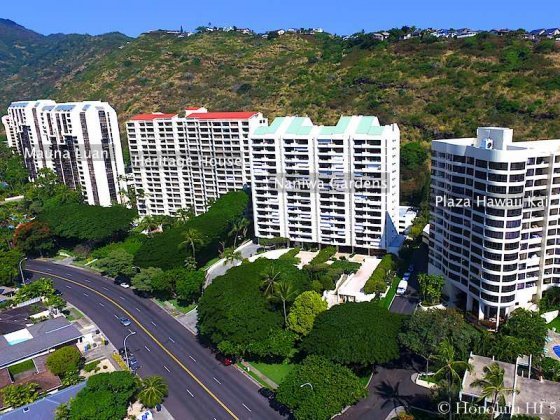 Note: If you are interested in Hawaii Kai waterfront living, check out our Guide to Hawaii Kai Marina Front Condos & Townhomes.

About Hawaii Kai Condos & Townhomes
Honolulu's real estate scene added a marina community from the earliy 1960's when Henry Kaiser transformed ponds and farms into a truly modern neighborhood. The central developed marina area take up more than 500 of the entire 6,000 acres that make up Hawaii Kai.

The first condos in Hawaii Kai were developed in the 1970’s with the first Hawaii Kai townhomes being built in 1968 in the form of the iconic Koko Isle, surrounded by water on all sides. Hawaii Kai condos for sale range between $400K for a 1 BR, up to $1.5M for units in the luxury low rise complex Kalele Kai. Hawaii Kai today includes about 10,000 households and is bordered by Kuliouou and Paiko Lagoon to the west and stretches to Makapuu Point, Oahu’s most eastern shore.

Kalele Kai, a mid-rise 6-story complex with generous-size condos as well as the Esplanade, with its many amenities, are very popular choices for marina front condo living. Some high-rise condos in Hawaii Kai, though not right on the marina, offer incredible marina and ocean views from their heights. This unique combination of marina and ocean views is not found in other condos in Honolulu outside Hawaii Kai.

Hawaii Kai Neighborhood
Life in this part of Oahu is something special because so much of it is centered around the water. Other areas have their beaches, but none have a close-knit marina community with waterfront homes, condos, shopping, and green parks too.

Everyday errands are often done differently here. Residents commonly ride their boat for a quick trip over for groceries, dinner or even a movie. At Christmas they dress up their vessels with lights and displays for the annual Hawaii Kai marina holiday parade, to the delight of young and old.

When it's time for something different, you always got options. Hike to the top of Koko Head and Koko Crater for exercise and the rewarding views, or enjoy the awesome waves at Sandy Beach. Snorkel among a serene school of tropical fish at Hanauma Bay, an amazing world famous fish sanctuary, and leave your worries behind.

All the conveniences are nearby too. From the stocked shelves at Costco to your choice of restaurants in the 3 shopping centers that cover fine dining to casual refueling. Plus, there are enough stores to keep even the most active shopper happy. Hawaii Kai also has several medical clinics, including Straub, Kaiser & Queen's.

There are many townhomes and condos in Hawaii Kai, but keep in mind that marina front has all been developed, making it impossible to add any more marina front condos. A finite market makes for excellent long term upside potential. Come to Hawaii Kai and start enjoying the exciting marina lifestyle.


History of Hawaii Kai
The figure of Henry Kaiser looms large over this neighborhood. While houses may have been built here sooner or later, the presence of Hawaii Kai condos and shopping centers were no guarantee without him.

The distance to town, its less fertile soil and, finally, the 1946 tsunami had left this locality almost deserted. It was considered the country, a place that personified 'the boonies' for urban Honolulu residents. Until Mr. Kaiser moved to Hawaii.

Having built the Hawaiian Village, the Islands' first destination resort, he looked for new projects. One fell into his lap while negotiating the land lease for his estate with the Bishop Trust. The trust had had no success figuring out a way to make the Hawaii Kai land economically productive. Desperate, they asked Kaiser if he was interested in taking a shot at it. He was.

The Bishop Estate officially leased the Hawaii Kai land to him in 1961. Kaiser had already dredged the ancient Kauapa fishpond to become what's now called Koko Marina. The first fruits were houses on the marina, quickly moving deeper into the valleys behind. Many believed at the time that Kaiser rushed some of the project, due to his failing health. However, the results have passed the tests of time and accumulated value.

The Hawaii Kai condos were part of the master plan from the very start, including the famous 2 parking spaces per condo rule. A definite plus from places like Waikiki that gave you only 1 stall, if any. Though new buildings and communities have joined, or replaced, the originals, they still follow Kaiser's vision of a flourishing neighborhood full of open spaces and surrounded by the beauty that was too long overlooked.