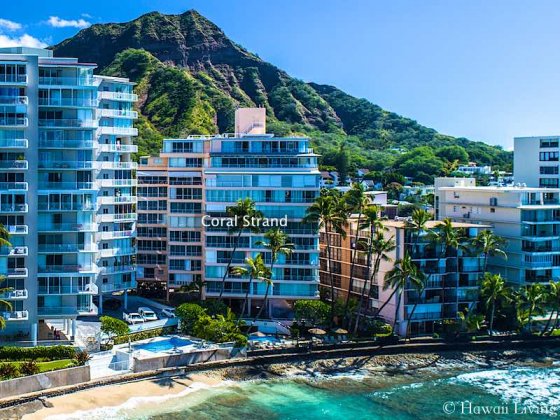 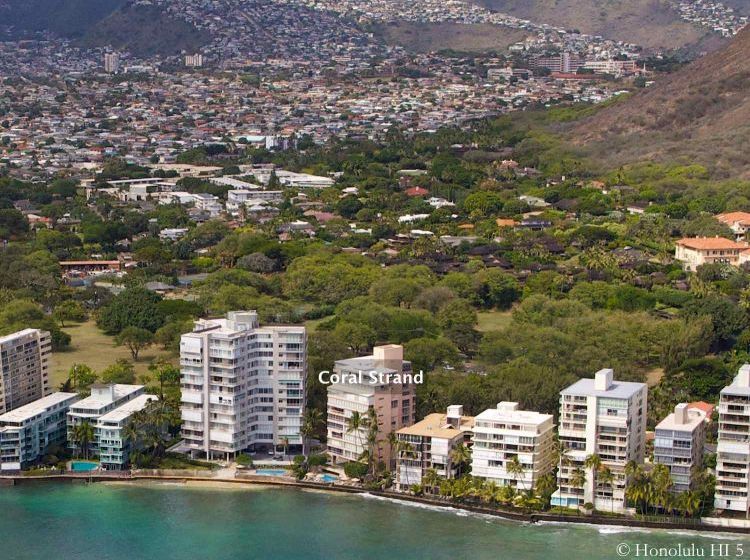 About Coral Strand
It can be difficult to describe the Coral Strand condos in diamond Head because each floor has its own unique layout. A 2BR on the 3rd floor will have a different layout and dimensions than one on the 6th floor. The building comes from a time when architects weren't as constrained by uniformity or conforming to a modular approach. This is a building that took chances and it paid off.

You can see that success in the prices that units go for, over 50 years later. The beautiful penthouse unit which covers the whole 10th floor went for $3.95M recently. These condos are obviously in demand.

Like other condos on Hawaii's Gold Coast, this building went up in a different Hawaii. One whose regulations allowed them to sit closer to the waterline. Residents from more modern oceanfront buildings can only gaze with envy at how near Coral Strand units are to the spray. That's not the end of the benefits of living here, however.

When the sun starts going down and the temperature cools, you can go down to the heated pool which, of course, also sits by the ocean. Hawaii evenings are truly special, but the treat of a late swim isn't always feasible. Attractive as it is, the ocean is too cool for most once the sun goes down. That's not an issue for you, though, due to this feature, which is something truly rare on the Gold Coast.

The setting you live within is a rarity, too. Regal Diamond Head looms over the North side, with Kapiolani Park lying next to it. Beyond that to the west are the busy avenues and top shopping of Waikiki itself. Always there when you want to dive in, but far enough away so the noise and activity seldom touches you. You might say living in the Coral Strand is not just the best of both worlds, but even all worlds.