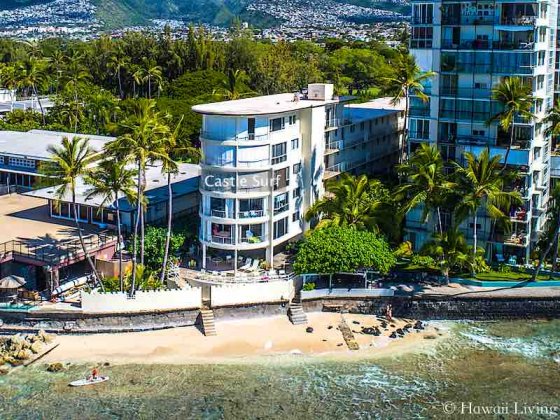 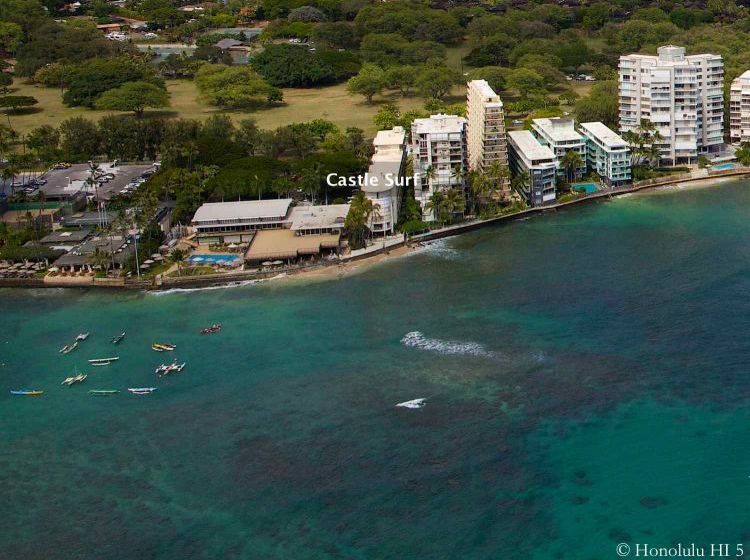 About Castle Surf
The Castle Surf Diamond Head condo was one of the buildings that went up in the accelerating construction after Hawaii won Statehood in 1959. However, the fact that it still stands, and the prices its condos go for, should tell you that this is no quickly-built property now in its declining years. Far from it.

The Castle Surf is a fee-simple condominium, distinguishing it from many of the other Gold Coast condos that are cooperatives. That's one of the reasons the maintenance fees are lower than for many of its neighbors.

The Gold Coast location makes for an easy stroll to Waikiki for dining and entertainment or a short drive to Kahala or Ala Moana Center for shopping. A range of leisure options are in easy reach. If you're in the mood for something more active you can use the private, secured beach access gate and dive right into the cool water; or just walk across the street to Kapiolani Park. Fitness stations, tennis courts and jogging paths are all there. It's also a great place to have a picnic or barbecue with friends.

This is a smaller, more intimate condominium. Just 6 floors total and 37 units, keeping life here quieter, as they like it in this neighborhood. The luckiest of all live in the 01 units, which, as you've probably guessed, face out directly on the ocean. Not only do they look over this ever changing masterpiece, they enjoy lanais with 245 sq ft of room to relax on and take it all in.

The building's age actually works in your favor. The regulations it was built under allowed it to be placed closer to the ocean than anything built since. Modern residences cannot grant you not only the sights, but the sounds of those soothing waves like the Castle Surf does. You're buying not just a home, but an experience here. One that fills each and every one of your days.

You may also be interested in.....
Tropic Seas, Kainalu and Oceanside Manor.

Here you can search all Diamond Head condos for sale or expand further to search to all Honolulu's condos.