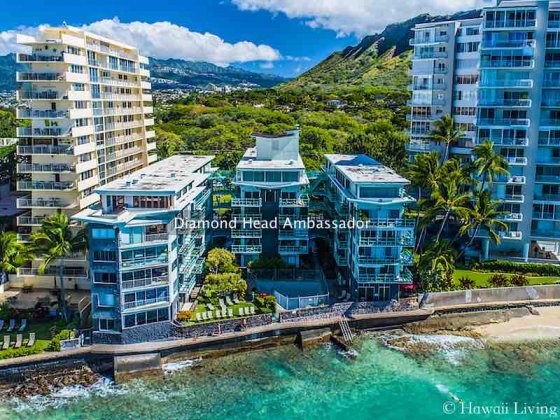 About Diamond Head Ambassador
It would be difficult to walk past the Diamond Head Ambassador condos without stopping to take in this unique complex of 3 buildings. It's no wonder, since it is the work of famed Hawaii architect Vladimir Ossipoff. The Japanese style architecture and the arched bridges linking the trio are something truly different and eye-catching. Other Gold Coast condos may stand taller, but none are so distinct or have the tasteful flair of this property.

Its singularity extends to other areas as well. Diamond Head Ambassador was one of the first co-op condominiums built on the Gold Coast, including what is still one of just 3 oceanside pools on this exclusive stretch of land. You'll also find, believe it or not, that one of the selling points for this condominium is the storage space available to residents! On the Gold Coast that is a premium, so the Diamond Head Ambassador is known for this asset.

The condos do tend to be on the smaller size, but that works in its favor for some as it makes the units more affordable than units in other nearby buildings. Living here, though, that's not as much of an issue since much of your time will be spent outside. The thriving streets of Waikiki are a short, oceanside walk to the west and vast Kapiolani Park lies across the road, inviting you for a jog or a round of tennis.

We didn't forget the greatest benefit of all. The Diamond Head Ambassador sits on an amazing stretch of the ocean, with some lanais on that side seeming to be literally over the water itself. You're that close to the waves. Listening to the Nature's lullaby in these tides is something you'll never forget, especially if you live here.

You may also be interested in....
Tropic Seas, Colony Surf, Kainalu and 2987 Kalakaua.  Alternatively, expand to search all Diamond Head condos for sale or start more broadly with all Honolulu condos for sale.