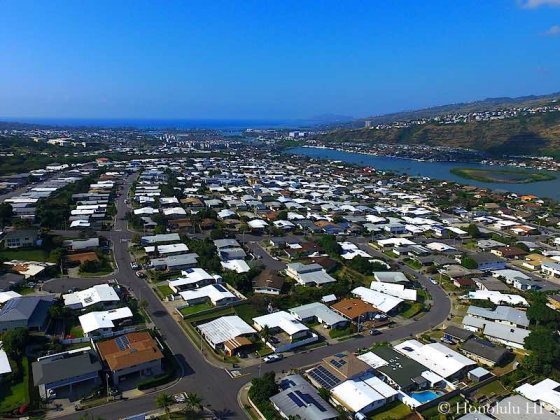 Perched along the western base of Koko Crater instead of Koko Head, Koko Head Terrace is a bit of a misnomer. The impressive Koko Crater towers over the neighborhood while the slightly smaller Koko Head is actually further south, across the street on the other side of Kalanianaole Hwy.

Insight to Koko Head Terrace Homes & Neighborhood
Over a thousand single family homes were built here, the vast majority between 1965 and 1972. All originally built Koko Head Terrace homes had a single level layout, many as small as 3-bedrooms, 1.5-bath with only about 1,000 (!) sqft interior living space, others slightly larger with up to 4-bedrooms, 2-bath.

The vast majority of Koko Head Terrace residential lots range between 5,100 to 7,000 sqft. Some lots that are backing Lunalilo Home Rd and Kalanianaole Hwy are a little deeper with about 7,500 sqft and offer an additional buffer distance from the main road.

Koko Head Terrace is best accessible from Lunalilo Home Rd via the surprisingly wide Kaumakani St, Anapalau St, Ahukini St and Kalanipuu St.  These streets offer an impressive entrance leading up into the neighborhood with a slight incline towards the imposing Koko Crater behind.

While most lots are level, the overall neighborhood is terraced with each subsequent cross street at slightly higher elevations. As a result, some of the back homes closer towards Koko Crater enjoy modest peek-a-boo marina and ocean views.

Many of the homes offer a simple practical layout and have become popular homes to remodel. Over the years a number of homes have been nicely upgraded with enclosed garage, added skylights, enclosed patios and some even with 2nd story additions.

The Koko Head Terrace neighborhood also includes two churches, the Hawaii Kai Library, several plant nurseries up to 5 acres in size at the foot of Koko Crater, and Hawaii Kai’s Kaiser High School right in the heart and center of the neighborhood.

The Koko Head District Park in the south, the Kamilo Iki Community Park in the north, and the Koko Crater hiking trail offer nice recreational options.

Off course, the Hawaii Kai Marina is just a stonethrow away, and so is the famous snorkel paradise Hanauma Bay.

You may also be interested in....
Searching all Hawaii Kai homes for sale or expand further to search all Honolulu homes for sale.