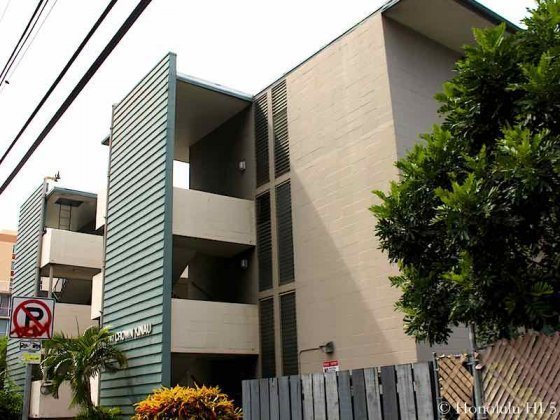 About Crown Kinau
The Crown Kinau condos are found on the mauka end of Kakaako, not far from the Honolulu Museum of Art, Thomas Square and the Blaisdell Center. Unlike the plans for this growing neighborhood, the 2 buildings that make up the whole are low-rise, with only 4 stories each.

The duo stand on Kinau Street, the next street up from Beretania St running westward below. Saying it's 'up' is very accurate as Kinau is up the slope that starts to run up the hill after Beretania, affording you better views looking makai.

The 30 homes divide up into 12 2BR/1BA with 581 sq ft inside, the other 18 having the same number of bedrooms and bathrooms, but a slightly larger 602 sq ft. Both layouts have lanais, all the same area of 44 sq ft. Sitting out there you can look at the Koolau Mountains rising above Honolulu as well as the city lights, from Kakaako to Downtown.

The parking is a little unusual, with units coming with either one or two spaces. In many cases, though, the one is big enough to be used as a tandem space, though the cars may both need to be compact sized.

What is certain is that much of central Honolulu is in walking distance for you. Downtown's offices are immediately to the west, making your commute not only easy, but healthy. Blaisdell Center is even closer, making it a snap to head over for the many shows and events going on there all the time, as well as the weekly Farmer's Market.

That's just the beginning, with Kakaako's bright future only starting to take shape. Shortly there will be a multitude of shopping, dining and recreation options coming to life in this district. The best news of all? You'll be right there to dive into it from your home at the Crown Kinau.