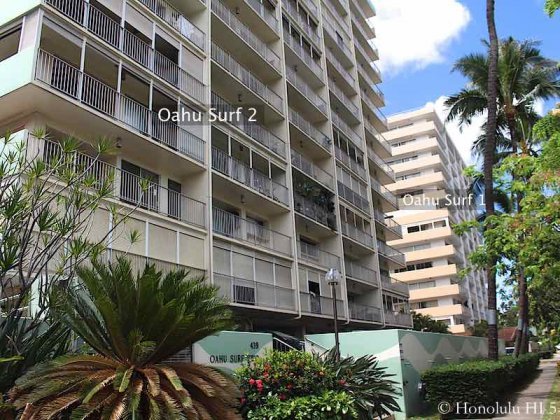 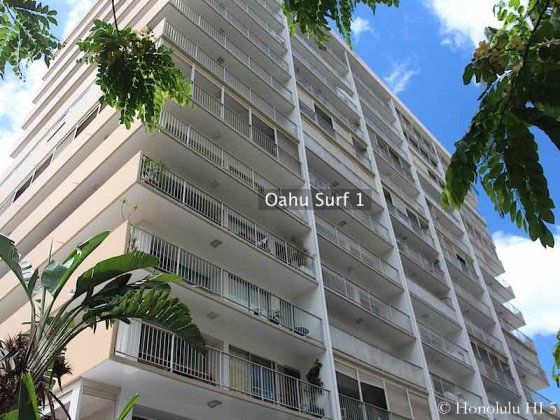 About Oahu Surf
The Oahu Surf 1 & 2 are two mostly identical condominiums, but with a couple of differences. Surprisingly, Oahu Surf 2 is the older, by one year, being built in 1971, while Surf 1 was finished in 1972.

Both Oahu Surf 1 & 2 share the same layouts for the most part:

One element that makes every layout so desirable are the lanais, that give you a minimum of 108 sq ft on up to a huge 316 sq ft! You see out to the canal and mountains, the bright city lights and even the Pacific Ocean sparkling in the sun.

You're also near enough to walk to the large sandy beaches of Ft DeRussy and the Hilton Hawaiian Village. It's a straight shot south for a few minutes and you're watching the waves come in.

Both buildings have one other very special feature, a rooftop pool. From up there you can see forever, playing in the waters with little but sky all around you.

The Oahu Surf condos are just right for those who want to be in Waikiki, but don't need, or don't want, to deal on a daily basis with the crowds and the tourist trade that begin a little to the east. Here, you enjoy the beach, avoid the bother.

You may also be interested in....
2465 Kuhio at Waikiki, Governor Cleghorn, Harbor View Plaza, Keoni Ana and Palms Inc.