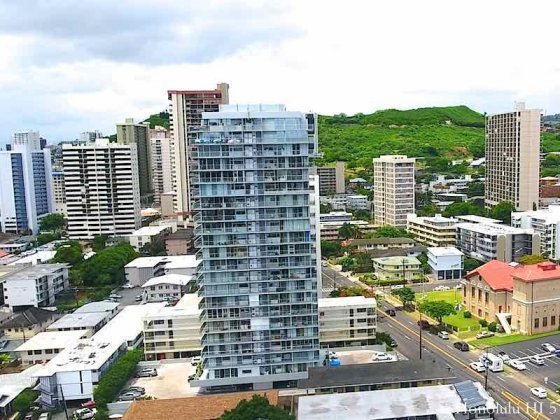 About Wilder House
If Wilder House were a nightclub, there would be a line around the block of people waiting to get in. Fortunately, Honolulu real estate isn't sold that way. Still, once you find out what's inside this building, you'll want to find a way to the front for the next listing.

Right off the elevator on your floor, you'll immediately notice something. You have just one neighbor. That's not only greater peace and privacy, it also means 180+ degree views from your ½ of the floor. It doesn't end there, either.

Your lanai wraps around with total dimensions of from 218 to 492 sq ft of outside space to kickback on. From there your views take in the Pacific Ocean, our beloved Koolau Mountains, Diamond Head and you can even watch the sun rise and set from many of the units.

You're also just off Keeaumoku St, with H1 just down the street, and just past it, Times, Safeway and Walgreens. That road is also the avenue to Walmart and Ala Moana Center, both in a few minutes drive.

Now you know why Wilder House stands out so much in the Honolulu condo market. Just be ready to move when one of its homes come up for sale. There's a lot of people who want to get in.

You may also be interested in....
1134 Kinau, Camelot, Makiki Plaza, Mott-Smith Laniloa and Punahou Royale.