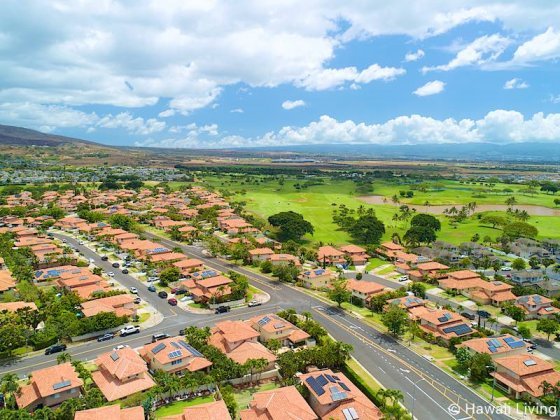 Aeloa, such a gentle-flowing word! In Hawaiian it roughly translates as the name of the trade winds. In the planned community of Kapolei Aeloa, on the ewa plain of Oahu, the trade winds are extremely gentle and flow through the open-design interiors of these single family homes in Kapolei.

Both two-story and single-level homes for sale in Kapolei Aeloa have three bedrooms, two baths; three bedrooms, two-and-a-half baths; or four bedrooms, three baths. They range in interior square footage of 1,116 sq. ft. to 3,667 sq. ft. and are situated on nicely landscaped lots of 3,708 to 8,388 sq. ft. The neighborhood is neat and attractive with mature tree-lined streets and a number of cul de sacs and walking trails.

Built from 1994 to 1999, Kapolei Aeloa is bordered by Kamaaha Street and the Kapolei Golf Course. Those on the golf course have fabulous views – some also have mountain views. All have Spanish tile roofs, high ceilings, open floor plans, walk-in closets in the master bedrooms, two-car garages, fenced yards, spacious living and family rooms, and lanai overlooking the backyard. The two-story homes for sale in Kapolei Aeloa have master bedroom-and-bath suites on the first floor. This is a design plus that can provide living space for kapuna to live, or relatives or friends to visit. It can also serve as a private office space.

There are so many more conveniences in each home at Kapolei Aeloa. And, their location is convenient to dining establishments, a water park, Ka Makana Alii shopping center, also big box stores such as Walmart, Costco, Target, and The Home Depot plus a 24 Hour Fitness location, the Kroc Center and a library. Kapolei Aeloa is a family-oriented community and close proximity to schools is important. Just a few minutes away, you’ll find Kapolei Middle and High Schools and the Kapolei Elementary School, listed as one of the top elementary schools on Oahu. UH West Oahu is also in close proximity.

Residents of Kapolei Aeloa are close enough to walk to the Kapolei Recreation Center which has a beautiful huge swimming pool, open seven days a week. The Rec Center also has programs for everyone from keiki to kapuna, such as: keiki steps, martial arts, fitness, tai chi, hula, Yoga, Zumba and more. There is also a multipurpose room for parties and meeting rentals. Membership is open to homeowners in Kapolei Aeloa for a nominal fee.

Kapolei Aeloa, like the gentle trade winds, is a very welcoming community, part of the Second City of Kapolei on the leeward side of Oahu.