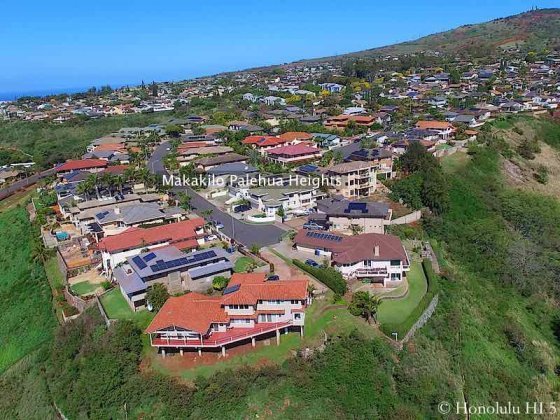 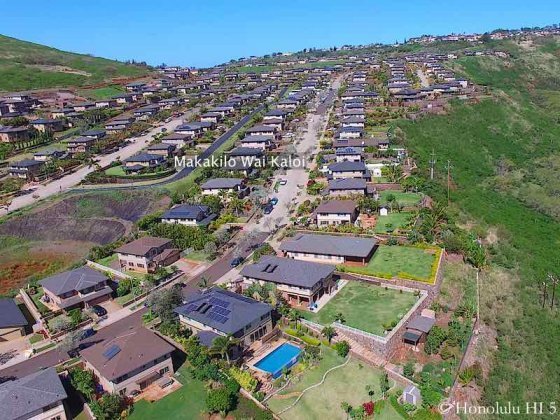 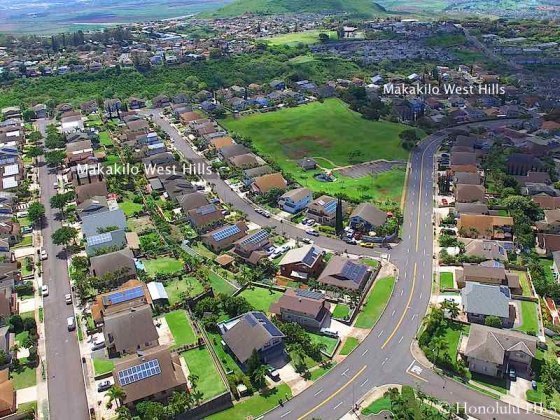 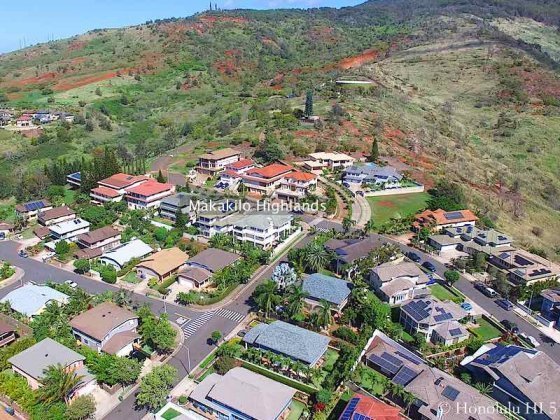 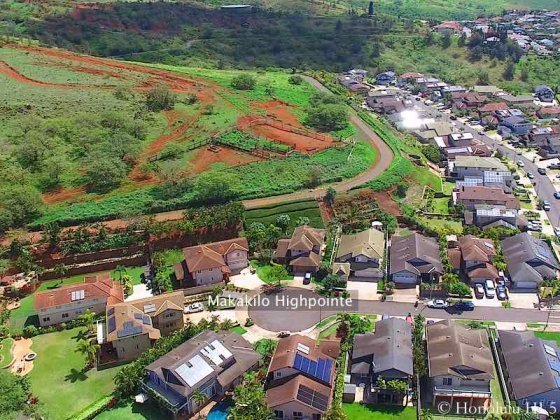 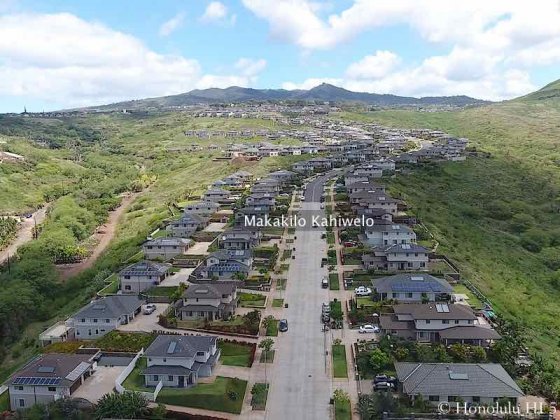 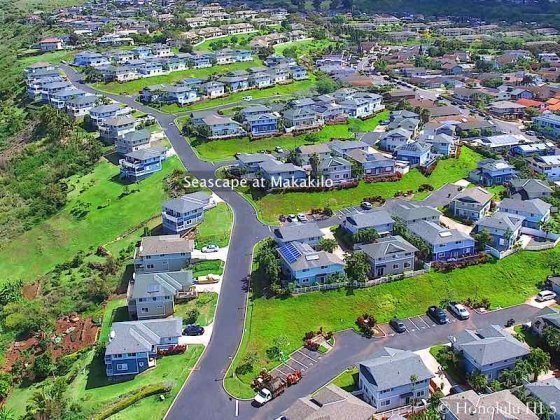 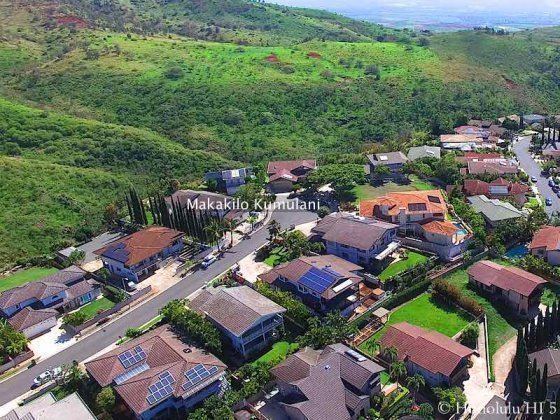 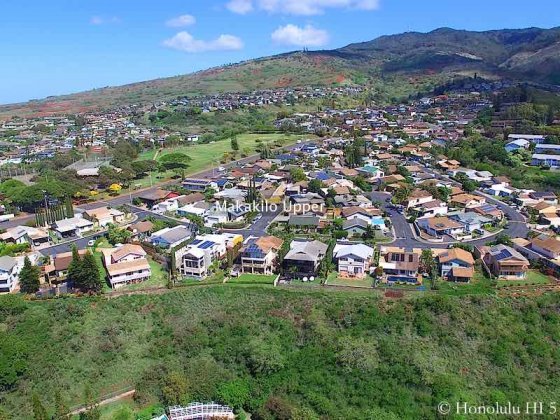 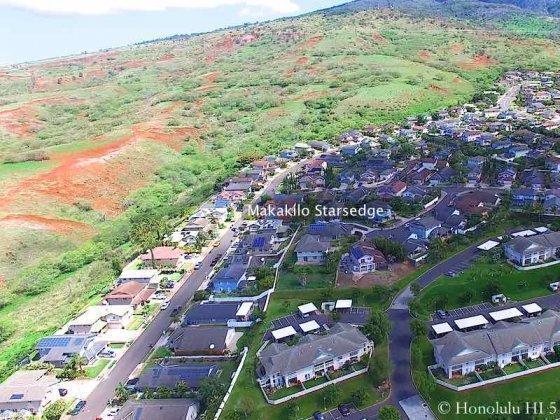 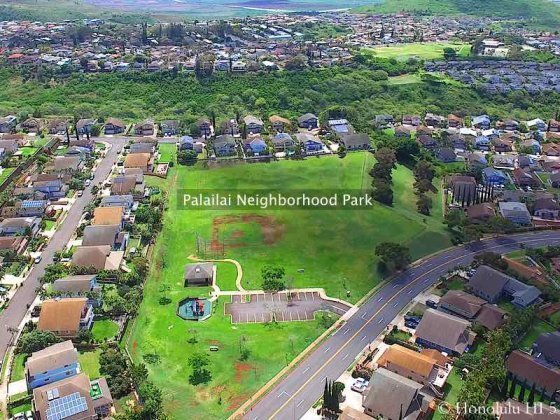 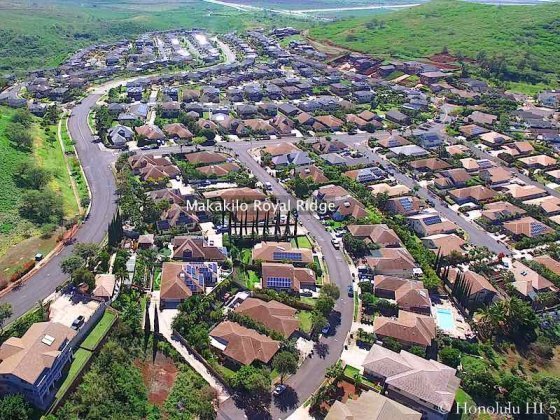 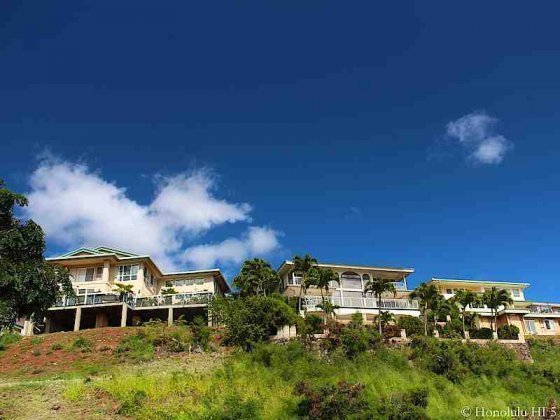 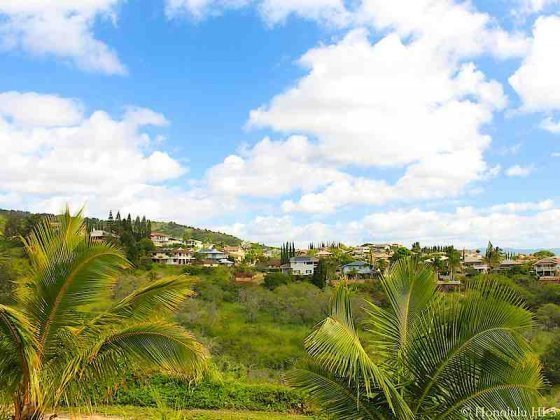 About Makakilo
In the ancient Hawaiian days the heights of Makakilo were used for an important purpose, the training and instruction of kahuna kilokilo. They were a class of Hawaiian priests who looked to the skies to divine messages sent by the gods through the clouds and birds. In fact, in Hawaiian, Makakilo means Observing or Observational Eye.

It's no wonder the kahunas chose the heights here, with its outlook that takes in Barber's Point on the west, all the way east to Diamond Head, 26 miles away. Yes, that prospect includes the Pacific Ocean as well to the south. On a clear day, it does seem like you can see forever.

If you know anything about Makakilo real estate, you know it sits above emerging Kapolei, which is at last truly becoming the 2nd City that had been predicted for so long. The rail project is fully underway, full shopping options are in place, with more coming, and once open fields are filling in nicely. See this short video driving by houses in Makakiko.

This is a Win-Win for residents who love Makakilo's slower, more relaxed feel. With the highway dividing the two communities, you have a permanent border, keeping each on its own turf. Makakilo residents have all the benefits of the shopping, dining and everything else that comes with a booming place like Kapolei within a few minutes drive, but kept at a perpetually safe arms-length. No worrying about the sprawl spilling over.

In Makakilo, the Views are Forever
With a majority of the Makakilo homes up the hillsides, that also means that, while the landscape below may change, your view will not be impeded. The potential of future high-rises to block your once perfect picture window is rarely a concern here. As many have found, Oahu real estate values can be greatly affected by this kind of change. That's an especially big concern because it's one you have virtually no control over. For much of Makakilo's homes, though, you can rest easy.

Another perk of hillside life? Going up the hill equals going down in temperature. Keeping cool on the often warmer Leeward Side is a benefit you can easily understand just in daily travel. Coming home from your job on the lower levels of the Island is an even more attractive proposition when you know there's a refreshing change in the weather awaiting you at home.

Now you not only live near a choice of beaches, and breaks, you've also got a retreat from the heat that comes with those outings. All you have to do is head to your own doorstep perched up on the hills.

Continued Growth, Without Crowding
The beginnings of homes in Makakilo came in the early 1960's, the initial homes being built around the bottom of the hill. Over the years the neighborhood moved further and further upward, always with a mix of houses and townhomes. No high-rises at all, maintaining both the views and the true neighborhood feel that draws many to this place.

DR Horton has been especially active in adding new subdivisions in recent years, starting in the early 1990's. That work has continued even to the present day, with the recent completion of brand new homes in the Makakilo-Kahiwelo subdivision. This is also a blend of houses and townhomes, with generous layouts of 3, 4 and even 5 bedrooms.

Overall, Makakilo homes can go from the low $400K pricing all the way up to $1.3M, so a broad range is available for homebuyers. You'll see lots primarily between 4,000 to 9,000 sq ft within that span, but there are some estate lots available that have as much as 38,000 sq ft. Those are fewer in number, but they're out there for the right buyer.

Townhomes provide a more affordable option, starting at the $200K level, but providing many of the same incredible views and plentiful built-in pluses of life on the climes of Makakilo.

One of those benefits are the open spaces, partly a product of the low-rise pattern of the housing built here from the very beginning. There are also 4 parks in Makakilo that add to that openness, with tennis and basketball courts, exercise equipment, playgrounds for the keiki and, of course plenty of grassy fields for you to enjoy and picnic on with family and friends.

A favorite stop for locals is the Makakilo Neighborhood Park for the views, especially nighttime. From here you can look out all the way to Diamond Head and see the beautiful Honolulu city lights, and everything in between. A great way to cap off another unbeatable Hawaii evening, losing yourself in the life of this wondrous Island that's laid out brightly before you.

That's the kind of moment that Makakilo was created for, one built upon serenity and the chance for quiet contemplation that you get when you live above it all. Here you leave the stresses behind and below you, where it belongs, and enter a place that values a lack of clutter, both actual and mental. You look out at the rapidly modernizing Ewa Plain, growing upward and outward, but then further on to the eternal ocean, unchanging, pure and ever-present. In Makakilo, it's all about perspective.


Makakilo History
The view from Makakilo is justifiably celebrated in the Hawaii real estate market. You can see for miles from your home here, out to the ocean and, on a clear day, all the way to Waikiki off in the distance. The open sightline from the top of these heights were greatly valued in the Ancient Hawaiian times as well, but for more important reasons.

The top of these hills, called Pu'u Makakilo, is at an elevation of 1,000 feet. Up here a specific priest caste dedicated to the god Lono, called the Kahuna kilokilo, practiced their duties of observing the skies to interpret signs and messages from their ancestors and the gods themselves. Changes in the clouds, alignments of the stars and the behavior of birds were monitored and scrutinized for meaning. That is the reason for this area getting the name Makakilo, which means 'Observing Eye'.

The kahunas advised the ali'i on everything from opportune times to attack, when certain religious ceremonies should be performed, whether it was safe to travel and almost every other aspect of daily life. What was seen from Makakilo had a huge impact on Hawaiian society.

The advantages of the hills took on other purposes in the 20th Century with the expansion of the US military presence on Oahu. A 5-story bunker was built in the hillside, complete with 2 16-inch guns that could hit targets as far as 25 miles away. It was all part of the effort to safeguard the Islands from possible naval or air attack. The bunkers were part of the old Fort Barrette, down in present-day Kapolei.

The fort had its own railway that ran from Oahu's main railroad near the coast, east to the fort and then up to Makakilo's bunker. Munitions were brought up there and stored, ready for any threat that might come over the horizon. Hikers can still visit some of the pillboxes that peer out from the hillside.

Homeowners here now enjoy the vantage points that once were valued for their religious and strategic benefits. The views that stretch out before them are strictly for relaxation and an inner lift to the spirit that is truly priceless. The motivations behind this place may have changed, but the inspirational vistas haven't, all these years later.