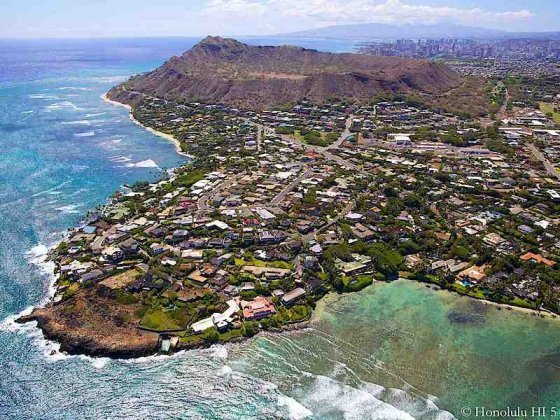 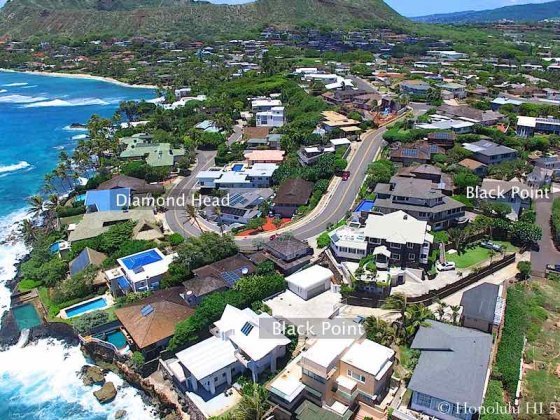 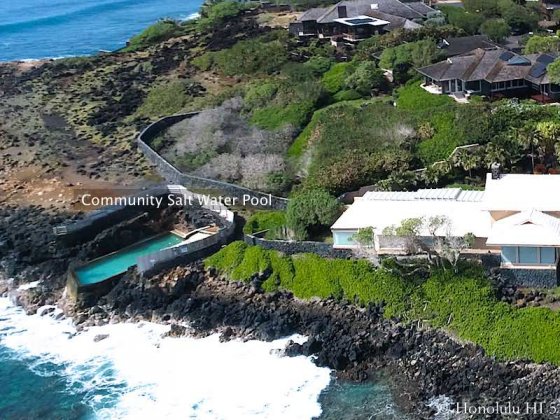 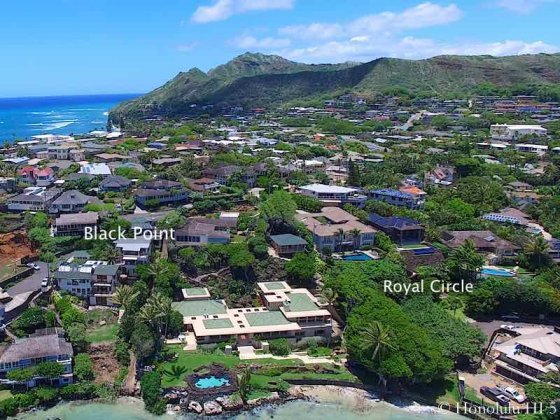 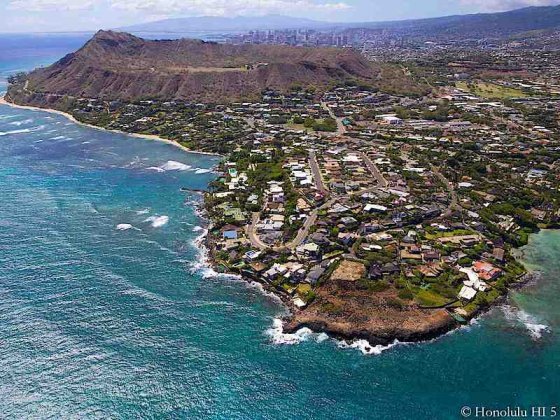 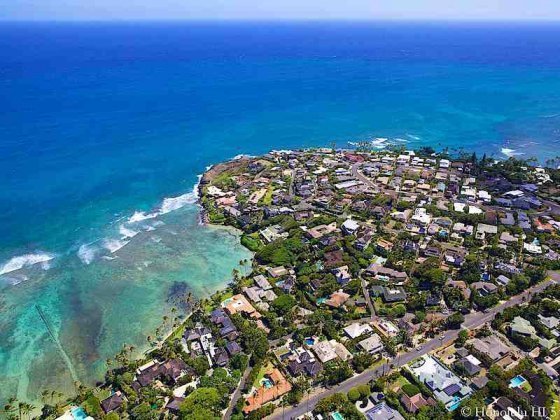 Black Point is an exclusive neighborhood of approximately 75 homes elevated on an oceanside black lava rock knoll wedged between Diamond Head and Kahala. Considered some of the most luxurious Honolulu real estate, Black Point homes for sale are typically valued between $2M and $10M depending on views and terrain. Lot sizes vary between 5,000 to 22,000 sq ft.

Insight to Black Point Homes
The ocean views of several of the Black Point homes are stunning and some of the most amazing in Honolulu, with waves crashing against the cliff.  The first properties were built during the 1920’s. A mix of charming older homes with large scale newer homes make up the area.

About half of the properties are located behind an unassuming secure rod iron gate at the top of Black Point Rd. Exclusive to the owners behind the gate, at the bottom of a narrow road, a salt water pool literally hangs on the ocean’s edge. There is another gate at Royal Circle, which offers privacy and security to just 8 homes. Both gated communities offer ocean access with great surf break close by the cliffs of Black Point.

Surrounded by the ocean this neighborhood juts out from the sunny southern shore and marks just about the most southern point of Oahu. Black Point real estate is desired by those looking for luxury, dramatic ocean views, privacy with gated security and the convenience of close proximity to shopping, dining and more.

You may also be interested in....
Diamond Head homes, Kahala homes, Waialae Golf Course homes and Kai Nani homes. Alternatively, expand to see all Honolulu homes for sale or all Honolulu condos for sale.


Black Point Honolulu History
Black Point real estate, like all of Hawaii, began life as a result of volcanic eruptions. Though it sits just beneath the famed Diamond Head, it came from a different eruption as that landmark, but around the same time.

The formed land ended in black lava rock that sloped down to the ocean, giving it the name we know it by today. The ancient Hawaiians, however, called this area Kupikipikio, which means 'Rough Sea' for the waves that constantly crash against these slopes.

In 1910 the US Army placed a small battery here as part of their plans for Oahu's defenses against invasion. The guns were intended to protect searchlights, in case of a night attack, as well as to provide other cover. They didn't remain long due to changes in defenses and strategies.

From the early 1920's, when homes on Black Point were first built, they were very exclusive residences. The ocean views and seclusion from the rest of the Island attracted the wealthy, as well as the famous, immediately. Most significantly, Doris Duke built her Shangri La estate here, an achievement of architecture and design that still dazzles present day visitors now that it is a museum.

Duke Kahanamoku, Tom Selleck and numerous other famous names have been residents over the years. When news columns cover a visiting celebrity, it's often noted that they're staying here, due to the privacy and luxury Black Point homes afford. It was noted recently that Johnny Depp was vacationing in the neighborhood, for example.

Though a few million dollars are needed for entry, most who live here will tell you it's worth every penny.