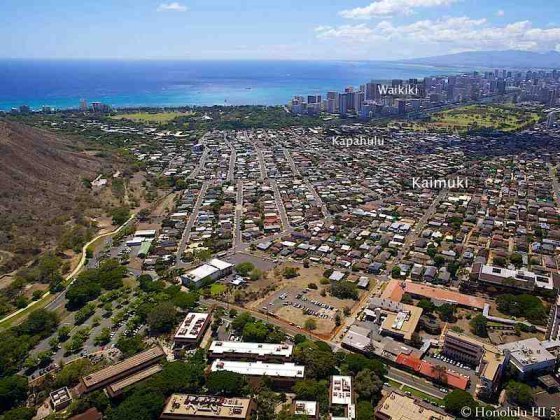 Kaimuki - the neighborhood where world-famous Hawaiian musician Iz grew up - is conveniently located on the mauka (mountain) side of Diamond Head Crater with Kapahulu to the west and Kahala to the east. Some of Kaimuki’s perimeter streets include Kapahulu Ave between Waialae Ave and Kaimuki Ave, Kaimuki Ave, 6th Ave, Alohea Ave, Kilauea Ave up to Luawai St, Luawai St, Waialae Ave between 21st Ave and back to Kapahulu Ave.

The gently rolling hills of Kaimuki are filled with predominantly charming older homes, sometimes owned for generations without ever having sold. Kaimuki homes for sale are typically valued between $700,000 to $1.3M, often on relatively modest lots, mostly between 3,000 and 6,000 sq ft.

Insight to Kaimuki Homes & Neighborhood
Most of Kaimuki real estate was built prior to the 1940’s with some as early as the 1910’s. Slowly, one by one, older homes in Kaimuki are giving way to new construction scattered throughout the area, as this sunny neighborhood is being re-discovered and valued for its excellent central location among the real estate in Honolulu.

Pu’Uo Kaimuki Park, a small park with nice views, marks the highest elevation in the heart of sprawling residential Kaimuki and is part of the rim of a small extinct volcanic crater.

Kaimuki has attracted a wide variety of renowned restaurants, coffee shops, bakeries and small stores, and is enjoying a recent revival of its small business district, running confined along Waialae Ave and Kapahulu Ave. Even with these additions, Kaimuki has managed to keep its old charm and small town feel. Close by is the weekend outdoor Farmer’s Market at Kapiolani Community College, popular with both residents and tourists, offering a great variety of fresh fruits, vegetables and much more from local farmers.

With its convenient central location and step by step revitalization it is no surprise Kaimuki real estate is in ever growing demand.

You may also be interested in....
Kapahulu homes, Wilhelmina Rise homes, Palolo homes and St. Louis Heights homes. Alternatively, search all Honolulu homes for sale or expand to all Oahu homes for sale.


Kaimuki History
Stories abound from the old Hawaiians about Menehunes, a race of small beings who could build huge structures overnight. It was this part of Oahu that was believed to be where these magical people made their ti ovens, which in Hawaiian are translated as Kaimuki. So these lands were named.

Very little was done on or with this hilly property until 1887 when a man name Daniel Isenberg used a large area for a cattle ranch. He also raised racehorses here that ran at the Kapiolani Park track, a place very popular with King Kalakaua.

The turning point that made Kaimuki a true residential neighborhood, though, was the 1900 Chinatown fire. Many of the Chinese who were left homeless by that fire moved here to make a new start, creating what was Honolulu's first major subdivision. There were more to come, however.

Kaimuki homes experienced even greater growth when the streetcar routes were extended out to this area of Honolulu in the 1920's. The many who work downtown could now live further out and still commute every day to their jobs. A second, larger population wave now made its way here, buying up lots and settling down.

Residents established a small-town feel on these streets, lining the main drag of Waialae Avenue with many local business and  restaurants. Take a walk around here and you'll still find those awaiting you,  along with charming homes that now hold the latest generations from those early 1900's migrations. It's that kind of community.