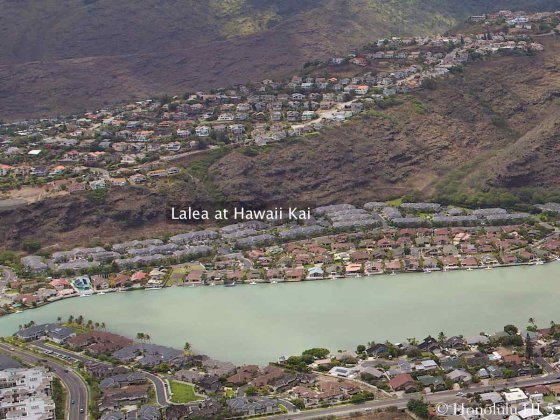 See this aerial video of Lalea at Hawaii Kai.

About Lalea at Hawaii Kai
The Lalea at Hawaii Kai townhomes isn't so much a condominium as it is a neighborhood itself. It comprises a total of 29 buildings, which were built in 4 stages over the same number of years. The first condos went up on the lands closest to the ocean, with the succeeding stages going up further and further into the valley.

A testament to their desirability is the high owner-occupancy, currently at 75%, and the very low turnover. These are in demand properties, even for Hawaii Kai townhomes, so they don't come on the market often. It's easy to understand why.

The views back in the valley are beautiful, looking up at the only-in-Hawaii green mountains towering over the region. Lalea sits back from the busy side of Hawaii Kai near the highway. Though just blocks away you're in a retreat from the traffic and noise of that busy corridor. It's almost as if you've been transported to a different Island when you turn off Kalanianaole Hwy and go back home.

That said, all the necessities - and more - are nearby. You're blocks from the Hawaii Kai Town Center with Costco and numerous restaurants, along with a Long's that's even closer. Recreation isn't a problem either. Maunalua Bay Beach Park is up the street, while Koko Head, Hanauma Bay & Sandy Beach are just short drives to the west.

Then again, there's plenty at Lalea to occupy you including a park of its own, a club house, heated pool and a real neighborhood feel. Great for playing with the kids or walking the dog.

The units themselves have their own attractions, including a number of floor plans with 1 to 4 bedrooms, so there's space to satisfy almost anyone. Most of the Lalea condos have 750 to 1500 sq ft, some with lanais to take in the fresh air that abounds in the valley.

For those seeking a home with the charms of a small town neighborhood, with all the benefits of suburban shopping and dining, contained in the beauty of Hawaii Kai - you've found your match.