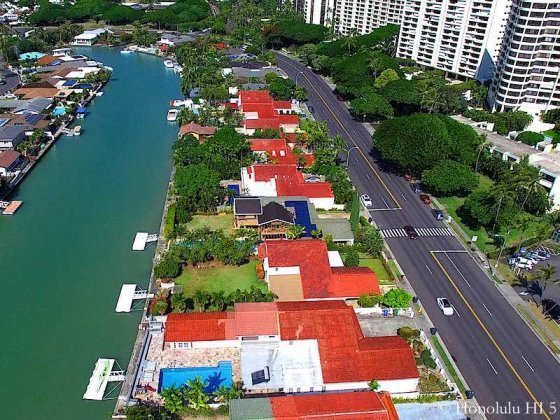 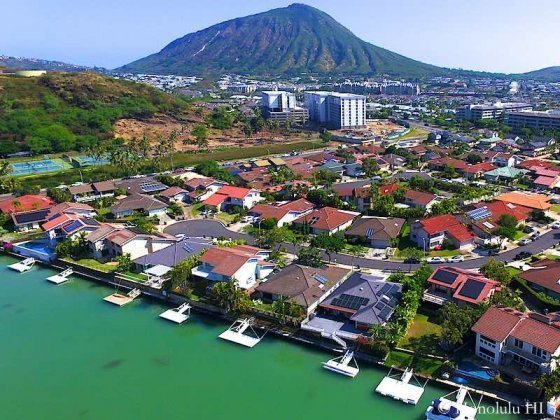 Neighborhoods like West Marina are the rare exception on Oahu, rather than the rule. Located in the higher-end, suburban town  of Hawaii Kai on the eastern tip of the island, West Marina is known for offering properties with private waterfront access along the Hawaii Kai Marina and canals that lead it and beautiful Maunalua Bay. Private waterfront property is almost nonexistent in Hawaii because the beaches are regulated by the State and are all public. However, the Hawaii Kai Marina and canals are privately owned and managed by the Hawaii Kai Marina Community Association. West Marina homes situated directly on the canals and marina enjoy this desirable marina lifestyle along with everything else Hawaii Kai has to offer. The town features busy shopping centers with grocery stores, a movie theater, fitness centers, medical offices and a number of other businesses. It’s also an easy 20-30 minute commute into downtown Honolulu and it’s an easy drive to favorite beaches like Sandy’s, Hanauma Bay and Makapuu.

West Marina is bordered by Hawaii Kai Drive, Lunalilo Home Road and Kawaihae Street. The single-family homes here are typically older than those in Hawaii Kai’s condo and gated communities, many of which also offer marina living but were developed in the ‘90s and 2000s. Most homes in the neighborhood were built in the early 1960s and sit on small, narrow roads that run parallel to the canals. From these backyards, residents have direct access to the water and some enjoy spectacular water views. In addition, many homes on the canals enjoy their own private dock, where they can keep a boat or access the water with a kayak or paddleboard. Houses that don’t currently have a dock usually have the option to build one. Some homes in West Marina have nice large, covered lanais out back that offer an ideal place for entertaining family and friends or just enjoying the landscape. Even without a lanai, gazing out over the water from your backyard is a great way to wind down at the end of the day.

Houses in West Marina sit on small to medium sized lots, usually no larger than 9,000 sq ft. However, for most people, the lack of a large yard is offset by the private water frontage. Homes generally feature 3 to 5 bedrooms and range in size from about 1,200 sq ft to over 2,400 sq ft. Most are single-level, but it’s possible to find 2-story homes in West Marina as well. A number of the houses have been renovated or completely rebuilt and feature modern appliances, state-of-the-art kitchens, bathrooms and living areas. Properties that have not been renovated are a great option for buyers who want to upgrade their new home to their own specific standards.

Because the majority of homes in West Marina were built before the major development of Hawaii Kai, they are more varied in their design than homes in other Hawaii Kai neighborhoods. Houses in West Marina can also be deceiving from the street. If the lot sits higher than the water and the backyard slopes downhill, a house may be much larger or have a much nicer view than you’d expect just by looking at it. West Marina homes are also on the more expensive end of the spectrum. While it’s not the most expensive neighborhood in Hawaii Kai, the private waterfront and marina frontage that West Marina offers puts home prices towards the top of the list.

If you’re an ocean enthusiast or are just looking for your own personal paradise on the marina, West Marina may be calling your name.

You may also be interested in....
Mariners Ridge homes, Hahaione homes and Queens Gate homes.  Alternatively, see a list of all Hawaii Kai homes for sale or exand to search all homes for sale in Honolulu.