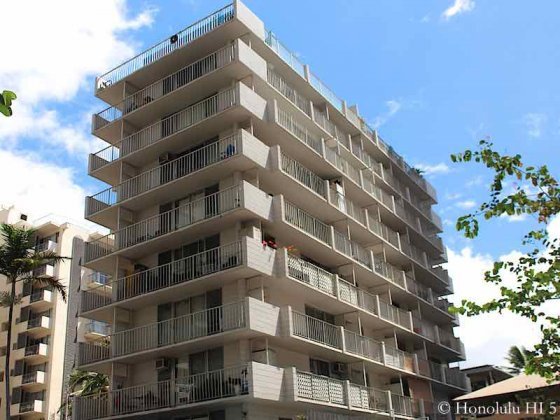 About 441 Lewers St
Longtime Honolulu residents will tell you that, back in the day, Lewers Street in Waikiki had a certain cachet for being right in the center of all the activity. Especially the nightlife. Some things have changed but living at 441 Lewers still puts you deep in the mix of what makes life in Waikiki so exciting.

Where 441 Lewers takes a beneficial left turn is on some of the lanais. Across the layouts you'll often find outside spaces of 63, 80 or even 121 sq ft. There's a few, though, that take up as much as 208 sq ft. What makes that exceptionally surprising is that those large lanais are on some of the smaller Studios, almost doubling the total square footage. Whichever size lanai, you have views of this active resort district, the Koolau Mountains and the flowing Ala Wai Canal.

Go outside and it's a simple walk to get to the beach or the restaurants and shops of both Kuhio and Kalakaua Avenues. Lewers Street, not to mention this whole area, have seen a lot of changes, but this is still central territory to a world-class resort and living in 441 Lewers means you're right there where it's going on.