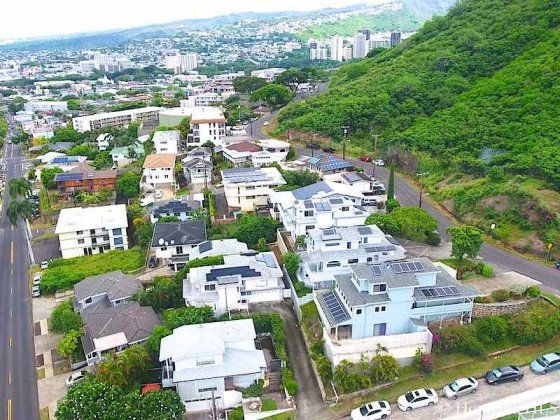 See our video of Punchbowl homes.

About Punchbowl Homes
Punchbowl homes have the very enviable location just behind the prime sections of Honolulu, mauka of both the city's modern and historical centers. One thing that needs to be understood first, however, is that there are 2 sections that make up the whole, Upper and Lower Punchbowl.

Lower Punchbowl takes in the properties hugging the base of the volcanic cone, especially the eastern side, where it runs into Makiki. At certain points, those two neighborhoods blur together so either or both labels are sometimes applied to the same place.

Lower has been especially taken up with condominiums in recent decades, being closer to town and its flatter lands making it more accommodating to those structures.

Turn your eyes up the slopes and now you're looking at the Upper area, which holds the vast majority of Punchbowl houses – and what homes they are! These hills here were where middle to upper class Honolulu families first settled in the early 20th Century and many of those original residences stand proudly still.

Those early residents enjoyed the very same attractions that draw so many today. The high ground creates a lookout that takes in the prime areas of Honolulu – the new Kakaako, the Capitol and Downtown. Just a little further out from those, you're treated to the blanket of blue ocean laid out all along the horizon as well.

These can all be enjoyed from the numerous vintage Island houses that come on the market, some designed by famed architect Vladimir Ossipoff. These kamaaina homes perpetuate the genteel lifestyle those original residents reveled in for the enjoyment of today's home buyer.

New or vintage, a house here will cost you more than many other areas of Honolulu. Scan the Punchbowl real estate listings and a you'll see many priced at over $1M.

Unlike some areas, however, where the price is elevated just for being there, the perks of living on these hills are abundantly clear. Looking out at the city below you and the waves beyond, you know exactly what you paid for and why it was worth every bit of it.

You may also be interested in....
Makiki homes and Palolo homes. Alternatively, expand and search all Honolulu homes for sale.