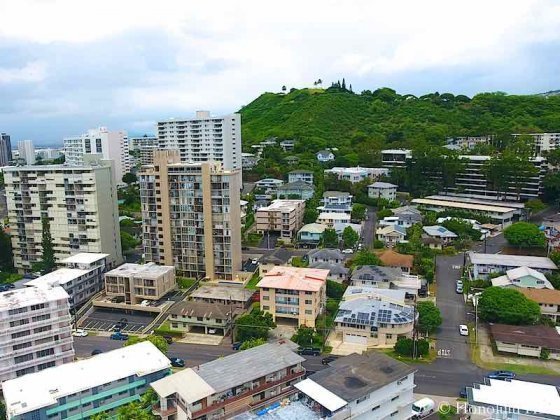 See our video of condos in Punchbowl.

About Punchbowl
The Punchbowl neighborhood has been an important part of modern residential Honolulu from the start. When the city's growth accelerated in the early to mid 20th Century, the lands around this volcanic cone began to be filled by those who sought cooler temperatures from the coastline. There were other attractions, too.

It was also conveniently close to the economic center of Downtown, yet removed enough so you felt the work stress was left behind when you came home. That removal meant you were in a true neighborhood, not a sub-section of the business district.

Punchbowl Condos
The Upper Punchbowl area on the hills remains single family home territory today, but Lower Punchbowl added condominiums on the lower, more level, lands in the latter half of the last Century, taking advantage of not only the existing benefits, but also the views a multi-story structure afforded, something previously only Upper Punchbowl homes could offer.

This not a high-rise jungle, however. A drive throughout will take you by many high-rise buildings, but you'll see a lot of traditional homes, too. This retains not only a clearer vista for condo dwellers; that balance also preserves the real neighborhood feel most Oahu home buyers seek out.

Many of the condos, though not all, back up against the Punchbowl slopes on Prospect St, using the elevated lots they sit on to look out across Honolulu, to Diamond Head and to the Pacific blanketing the horizon.

A couple of good examples are the Royal Vista and Ka Hale Moi, famous for their views, their green, landscaped grounds and roomy dimensions. They both also provide large lanai spaces to maximize the pleasure of the vistas.

There are some excellent residences on the west side of Punchbowl, too, like Dowsett Point. It can also be found on Prospect St, from which you enter what looks like a 2 story building, but is actually 10! Built down the slope below Prospect, your home here is always very roomy, running from a 1BR of 771 sq ft to a 3BR with 1598 sq ft. There's also 2 tennis courts that are either on street level or 10 stories up, depending on your perspective.

Not every condo in this neighborhood is on this one street, of course. Wilder Avenue is another where many are found, for instance, like 999 and 1001 Wilder that both give those same breathtaking views from beautiful, well maintained buildings.

Entering this part of Honolulu does feel like a world of its own, a definite sea change from the traffic woes and stress of Downtown. Commute when you have to, but know that you can soon be home in your condo, enjoying your lookout on not only modern Honolulu, but the timeless touch of Mother Nature.