Hawaii Kai or Kailua: Which Offers The Better Lifestyle? 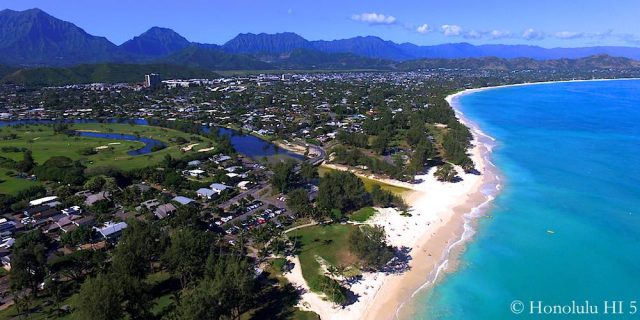 One debate that commonly arises for Oahu home shoppers is choosing between Hawaii Kai and Kailua. They sit at comparable distances from Downtown Honolulu, where most make their way each weekday morning and have their own waterfront real estate possibilities to offer. It can be difficult to come down on a favorite between the two, especially if you assume that they aren’t all that different. Maybe we can help. As usual it all starts at the beginning.

By that we mean the roots of the two communities, which happened in very different times and under very different circumstances. Let’s begin with the older of the two, Kailua, which traces its origins back to a Native Hawaiian community at least 1,500 years ago and occupied ever since.

The modern form of the town started to take its shape in the 1940’s when the Castle family turned much of its huge landholdings on the Windward Side from ranching to real estate. Most of the neighborhoods there today were sold in individual lots, the new owners erecting homes over time.

This was a community that grew, in many ways, organically. Kailua homes are a hugely varied collection of layouts, sizes and ages. A Mid-Century ranch house sitting next to a New England influenced two story design next to a classic Plantation style home. It’s clear that this community came from an older Hawaii. Less uniform, more individual.

KAILUA – SOME CHANGES, BUT THE SPIRIT REMAINS 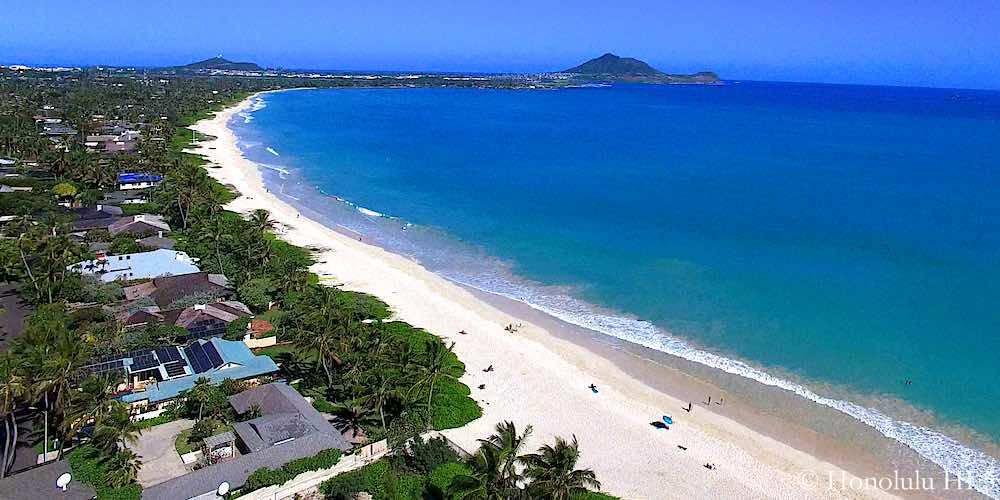 That continues today, with large mansions being built in areas like Lanikai and Beachside especially, rising up on lots in the piping hot Kailua oceanfront real estate market. Homes on or near the Pacific in this town have the privilege of proximity to an incredible multi-hued blue sea lapping up to a beach that runs for miles up the coast, the much loved Mokes looking back just off shore. For some that’s a daily treat to indulge in from their living room.

Home shopping is an adventure here, with new listings inevitably producing an unexpected surprise, something different to offer that you need to see for yourself.

One of the most surprising for longtime Kailuans are the new condo communities, notably the partially completed Ka Malanai that sits right on Kailua Road in the center of town. Never has a condo property ever been so prominently located, a sea change for this community.

What you can count on, wherever your home here, is an experience that has made Windward Oahu famous. Low-rise skyline, an easy-going attitude that prevails and a gratitude for the beauty of each new day. It’s a distinct mix of the local culture with a little hippy thrown in.

That culture extends to the shopping where you’ll find Whole Foods, numerous local craft and clothing shops, a vast range of restaurants to cover every taste and even an actual bookstore.

Target has arrived here, though not without some resistance, but its popularity is plain to see. Still, it’s the only thing resembling a big box store within the city limits. Windward Mall in Kaneohe is the place to go to see a movie or do large scale shopping, with its two floors and 110 stores that include Macy’s and Sears.

Though there are a few bars here and there in Kailua, this is a town that gets pretty quiet after 9PM or so, any noise coming from friends barbecuing at each other’s houses. The big attraction here are the Daytime activities.

WHERE THE ACTION IS IN KAILUA

That means the active outdoors. It all starts with Kailua & Lanikai Beaches, where the sunbathing is excellent and the sands o-so-soft. Kailua Beach especially is the place for getting out on the water. Kayaking, paddle boarding, surfing, snorkeling – if it’s fun and can be done on the ocean, chances are you can do it there. 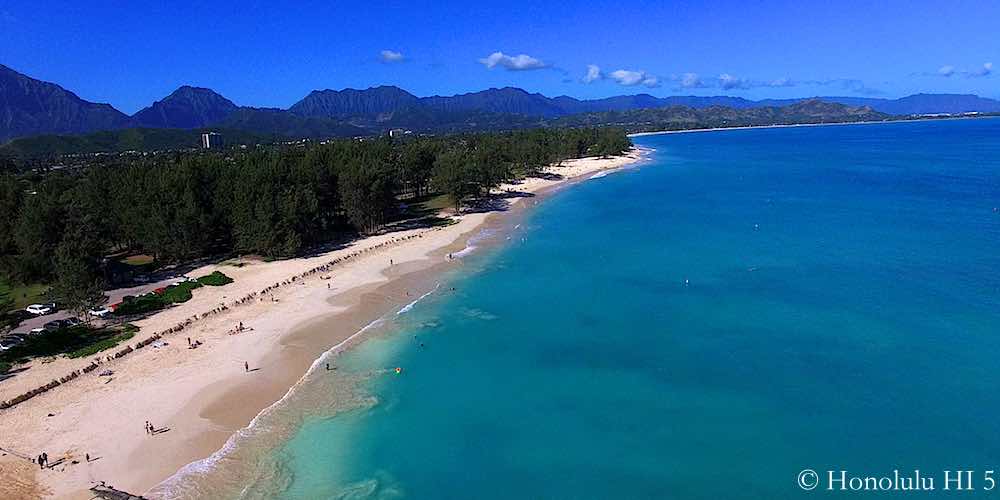 It’s also a place where people walk and bike to get around, a conspicuous part of the active lifestyle, as well as eco-conscious concerns, that typifies the people who live here.

We leave this seaside town, preferably in an electric vehicle, to visit another settlement beside the ocean that sits around Makapu’u Point on the south side of Oahu.

HAWAII KAI – REAL ESTATE VISION MADE REAL
To understand Hawaii Kai, it’s essential to know that that it is a Planned Community. Unlike Kailua, very little was on these lands previous to the 1960’s development due to the 1946 tsunami wiping out the few farmers that were here.

Henry Kaiser famously came in and dramatically altered the landscape, creating the marina that anchors the entire area, along with planning the entire layout of this place. Most of what is here was contained in the original plans. 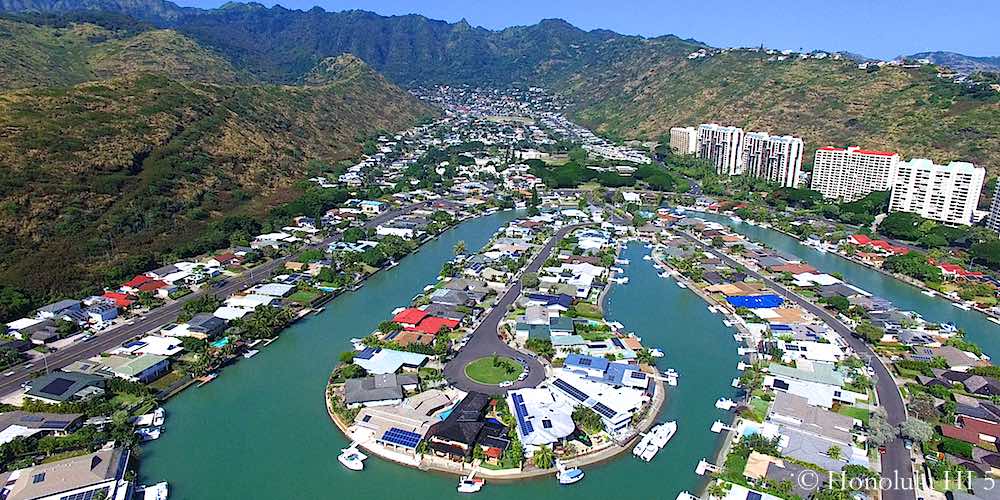 The concept took traditional waterfront living and raised it to another level. A large number of Hawaii Kai homes sit directly on the marina’s edge, most with their own docks floating beside the end of the owner’s back yard. The water isn’t something to drive to or even walk to. It’s an integral part of your waking hours, a companion and comforting presence that’s always there.

The marina front residences, as well as those further back, include both single family homes as well as condos, especially townhomes in the makai section. Due to the planned development, there are models here, so you know the general dimensions and layout you’re dealing with in a listing.

That doesn’t mean a limited range, however. There are many different condo communities right on the marina alone, that each offer their own unique variations, such as Moorings, Kuapa Isle, Marina Palms, Villa Marina and Mawaena Kai to name only a few. 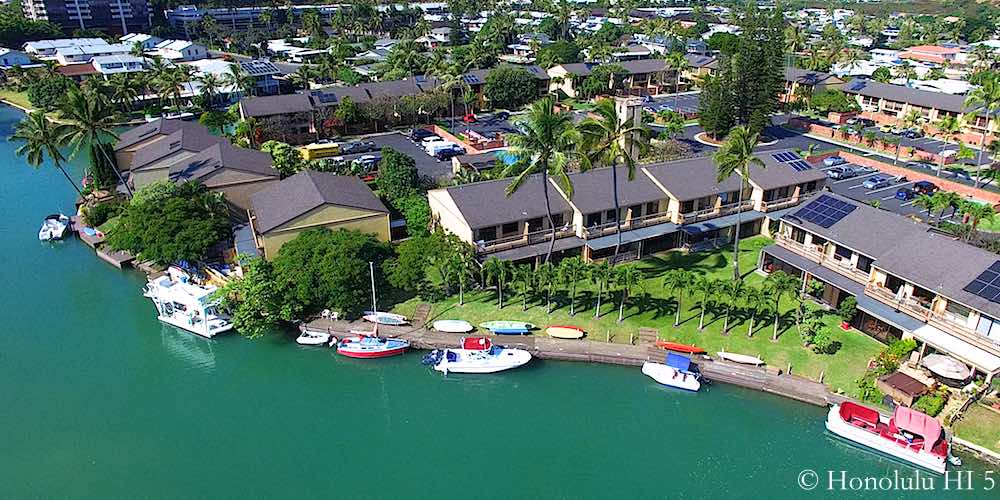 In addition to the marina, many homes sit back in the cooler areas of the valley, popular for generally being more affordable and away from the busyness of Kalanianaole Hwy.

Hawaii Kai also has maintained the low-rise profile across the vast majority of the community, but there are some high-rise condos on the sides of the valley as well as the back. They provide deeper options without intruding on the sight lines.

DEEP SHOPPING & DINING IN HAWAII KAI
What is clear here is that while the plans reduced some of the variety of homes you’d have in Kailua, it did make for a more open environment on the street level than Kailua, with more space between homes, wider streets and more open grassy areas around.

Where it gets more dense is in the shopping choices, with the large Koko Marina Shopping Center standing out. However, it fits right in this community being outdoors and leaning toward local stores and specialty shops, rather than chains, along with many restaurants as well. It’s also unique for having a dock so locals can sail over and enjoy some R & R.

2 other smaller shopping centers provide the more typical outlets that have any and all essentials, such as Safeway, Long’s and even a Costco. Much of your needs can be taken care of without leaving your neighborhood.

Although you live in an oceanfront area, it is a little different. There are no real beaches in Hawaii Kai, the coastline being rocky in many places. That doesn’t mean water sports are out. Not at all. Along with sailing this is a major outrigger paddling center as well as kayaking, parasailing and paddle boarding. There’s even a couple of popular surf spots off of Portlock.

A quick drive east will get you to the world famous snorkeling at Hanauma Bay and a little beyond that is Sandy Beach, a well known place to enjoy the sands, but beware of some very powerful waters.

It should also be clear that Hawaii Kai is not the tourist destination that Kailua has become and will almost certainly never be so. It is purely a local neighborhood through and through. Another aspect to understand is that it has probably reached the end of its build out.

Developments on the ridges above have come in recent years, but the residents in the marina and valley areas have made it clear that further additions are not welcome. Outside of a purely rental condominium that opened in 2016, new additions to Hawaii Kai real estate have been very quiet. 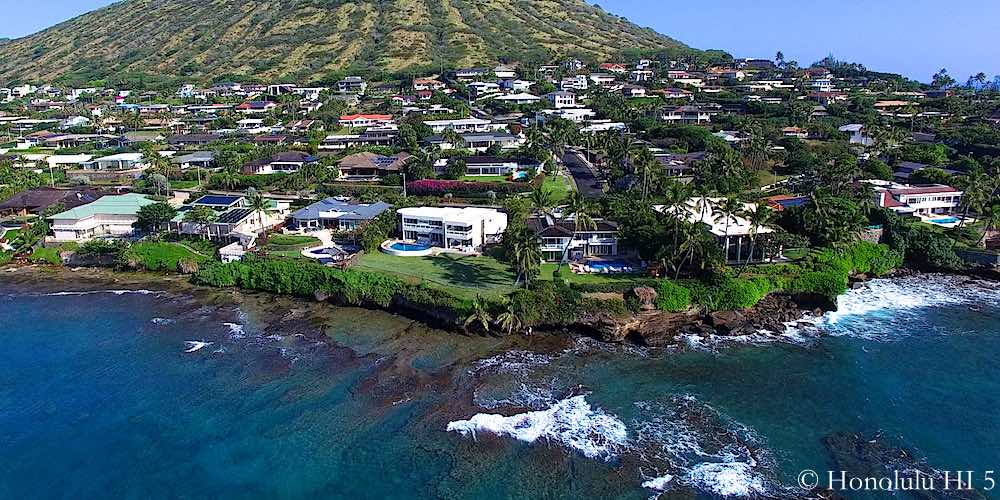 HAWAII KAI OR KAILUA – WHAT DO YOU THINK?
There isn’t a better choice between these 2 Oahu neighborhoods, just a ‘better for you’. The differences in lifestyle and the daily experience are shaded enough between them that by now you’ll find yourself imagining living one more than the other.

Kailua and Hawaii Kai are a contrast of the Hawaii, one a little more messy due to its unguided growth, but unmistakably vibrant and magnetic in its personality. The other is a jewel, formed from once abandoned lands, into an open and more orderly community.

Of course, a single article shouldn’t make the entire decision for you, but we hope to have given you an informative weather vane, pointing you in what’s most like the right direction. Oahu real estate is about more than the home, it’s the entire world that surrounds your home and how you fit in it. Is it the right fit for you?