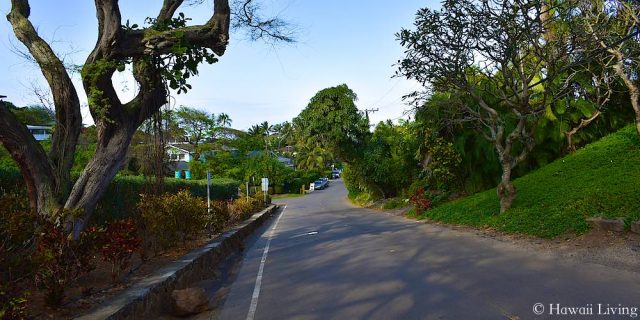 Surf, sand and sunscreen are great, but sometimes getting off the beaten path (or beach) can provide a bit more tranquility and privacy. Consider taking the high road. Look up when you are searching for that special piece of real estate in Kailua. Perhaps you’ll find the perfect home for sale – the one you’ve been looking for with ocean or mountain views, on a quiet street, nice neighbors and conveniently located. Perfect homes come in a variety of styles and price ranges and are located in three unique hillside neighborhoods in Kailua.

Lanikai Hillside
It was in the 1920s when Lanikai’s hillside became a point of distinction and the Powlison family built on top of Alala Ridge. The most magical and historic home in Lanikai, Hilltop House, juts out at the entrance to this neighborhood. The rocks of the Alala Ridge are crafted into and integrated into this landmark home, still owned and occupied by members of the family. 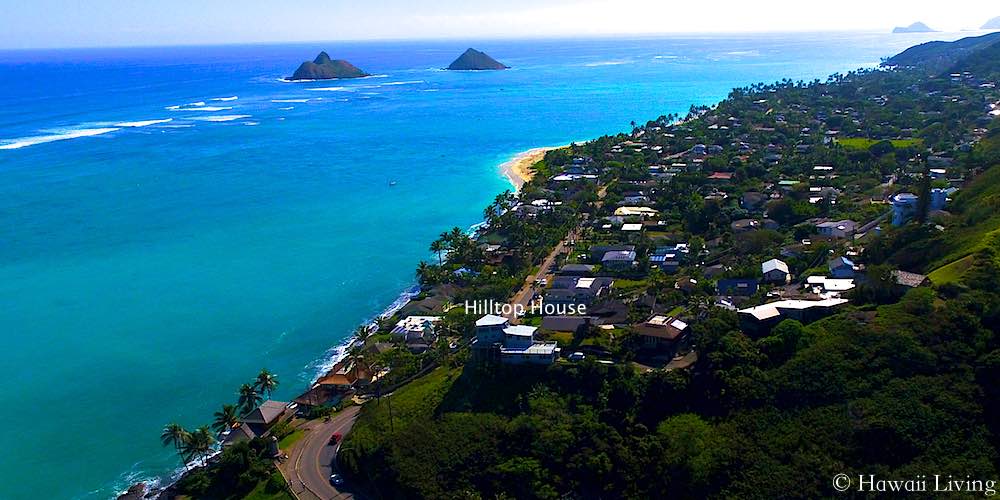 The family might have been one of the first but certainly not the last to have the insight and architectural vision to move back from the surf and sand and take in the views by perching themselves in a dwelling that rises to new heights.

Today, many of the single-family homes in Lanikai are hillside and do seem to nestle against the rock mountain. However, other than the Hilltop House, most use the environment in more conventional, albeit, high-end architectural designs. Architects, landscapers and homeowners have adapted their hillside homes, in some cases, by placing the backyard in the front yard due to the sloping terrain. It is not uncommon to find the swimming pool in the front yard, landscaped tastefully for privacy as well as to maintain that spectacular view. 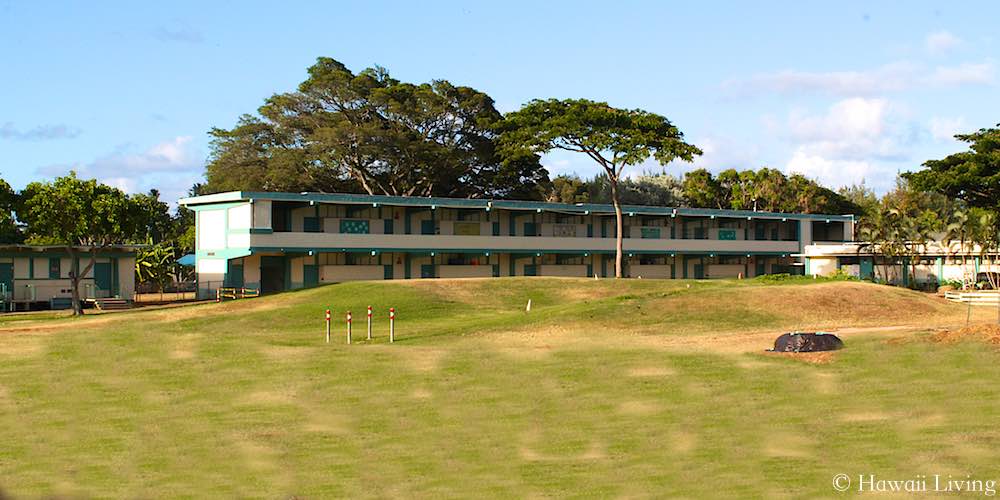 Family-oriented and welcoming, Lanikai residents lead an active lifestyle. All ages bike and run the loop, hike the pillbox above their neighborhood and swim and play at the beach. Most importantly too, for families with young children, Lanikai is zoned with a top-rated elementary school, Kaohao, a Public Charter School (formerly Lanikai Elementary School).  This school is often requested as a district exemption for families wishing their children to attend, but first priority goes to Lanikai residents. 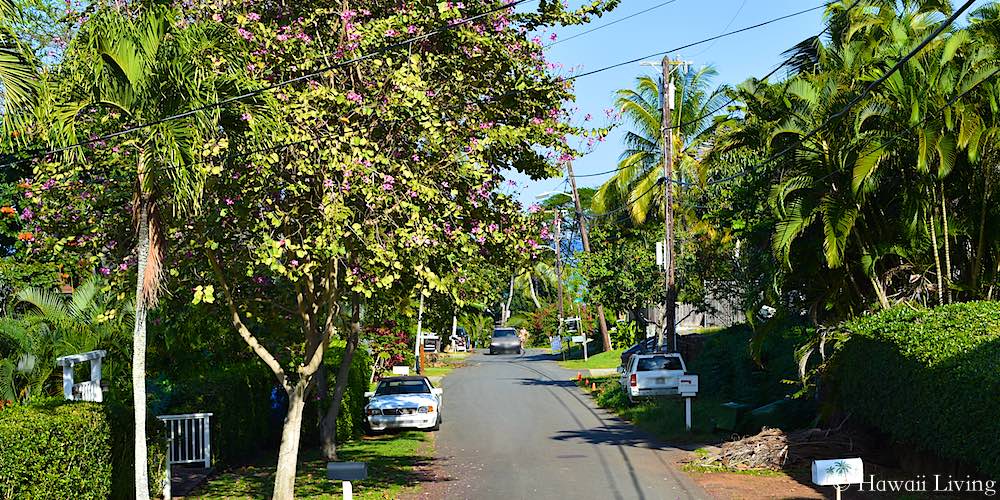 Lanikai hillside features a variety of homes from multimillion dollar estates, both established and newly constructed, to modest smaller single-family homes with a wide range of real estate between the two ends. There are three main streets running off of Aalapapa Drive (the back side of the loop that runs through Lanikai) that offer hillside homes: Poopoo, Lanipo, and Koohoo. 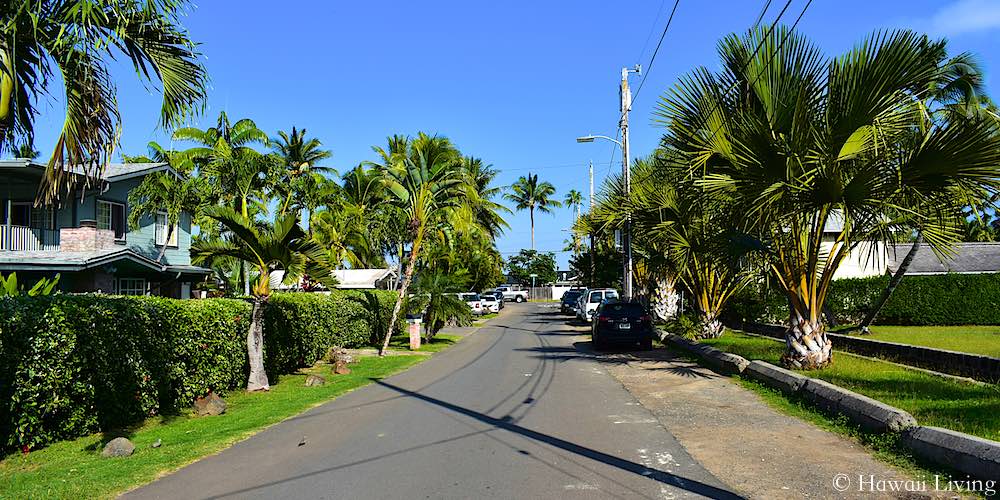 There is an even more exclusive area at the end of Mokulua Drive (the other half of the Lanikai Loop) where a private road leads up to two ultra-luxurious estates. One of these mansions sold for $6.1 million and the other sold for the highest ever, non-oceanfront recorded property in Kailua at $13.8 million. Price ranges vary for other homes on the hillside and mauka side of Aalapapa. Most recently a home on Aalapapa listed at $1.775 million and on Koohoo at almost $5.4 million. Homes rarely go on sale in this area and those that do and are listed below $2M do move quickly. Presently there are only three active listings on the entire hillside in Lanikai.

Joining the Lanikai community is a dream for many and the bonus to being on the hillside in Lanikai is maintaining a level of privacy away from the well sought-after beach and roads. The beach and loop are conveniently located for all residents, but also are a draw for the rest of Hawaii and tourists. Living on the hillside then provides a respite from noise, traffic and people – both tourists and locals alike. 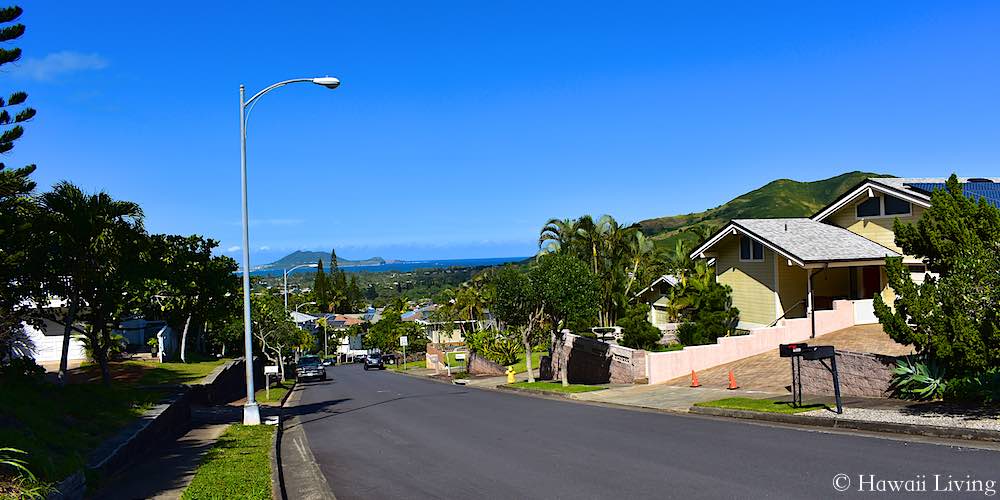 If you can’t find the home of your dreams in Lanikai, consider Hillcrest, a hillside neighborhood in the Enchanted Lake area of Kailua, with upscale single-family homes that often have magnificent panoramic views of the Koolau Mountains, Kailua town and Kailua Bay.

Homes in Enchanted Lake and Keolu Hills neighborhoods first began around 1960 followed by Kailua Heights also on the hillside. However, as you travel further up and reach the pinnacle of this area, homes become newer and some are modern architectural wonders, featuring elaborate amenities.

Look for the cobalt blue rooftop of the magnificent estate that stands out on the hillside, a marker of this neighborhood, so you’ll know where you’re going. 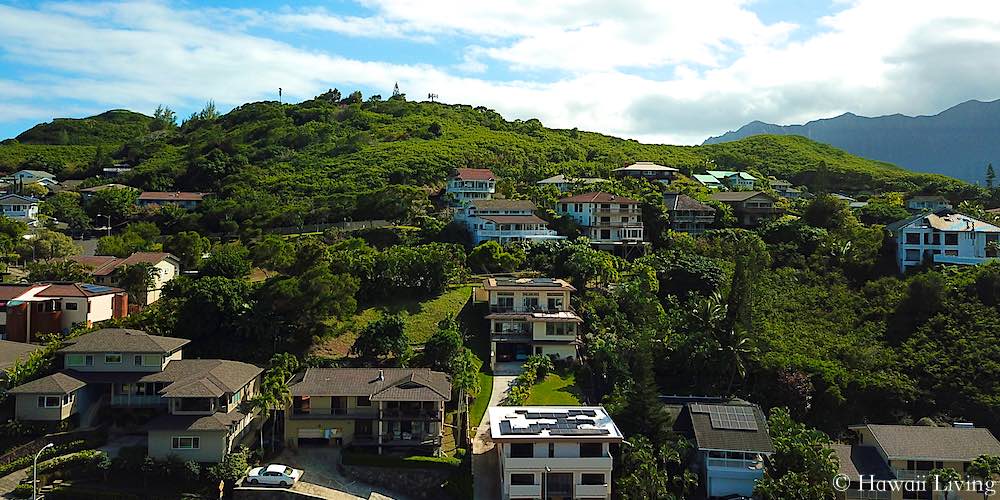 Like the hillside in Lanikai, Hillcrest is removed from the main road that runs around the Enchanted Lake and is one of the main roads in and out of Kailua. Keolu Loop connects easily though with Kalanianiole Highway (Route 72) and provides easy access to Castle Hospital and the Pali Highway. Keolu Drive is also a connection to shopping and downtown Kailua.  Enchanted Lake, although part of Kailua, has its own shopping center, Enchanted Lake Center. The shopping center is complete with a supermarket, a family-owned and newly remodeled movie theater, restaurants and other convenience stores including a Starbucks to get you going. 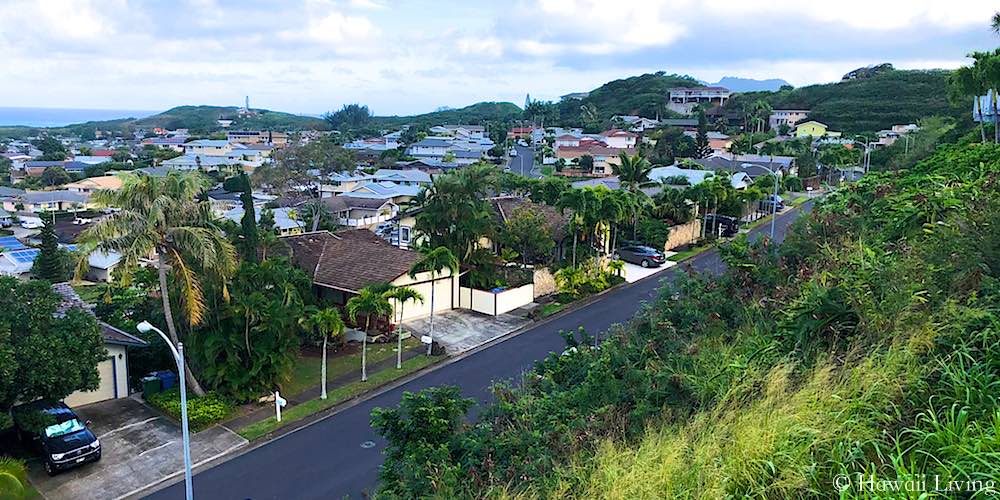 A municipal park and skate park are big draws for this family-oriented community and Hillcrest is zoned for Enchanted Lake Elementary School in the top 20% of Hawaii’s elementary schools. The beach and the center of Kailua town are just a few minutes away by car.

A few of the streets in Hillcrest that offer the privacy yet convenience of Kailua and the surrounding beaches, plus easy access to Honolulu are Aupupu and Aunauna Streets. Both are cul de sacs and provide panoramic views of all of Kailua and Kailua Bay. Currently there are only four active listings on the market in the Hillcrest neighborhood with an average list price of just under 1.3-million dollars.

Kalaheo Hillside
Similar real-estate prices with an average selling price of $1.423 million and an average of 46 days on the market is what you’ll find on Kalaheo Hillside – although homes for sale in this upscale neighborhood are often hard to find. Popular with officers and other members of the military, Kalaheo Hillside is on the opposite side of Kailua from Lanikai, just a five-minute drive to either the front or back gates of the U.S. Marine Corps base at Kaneohe. Kalaheo Hillside homes are also an easy 10-minute walk to the nearest public beach access off N. Kalaheo Avenue, Kailua. 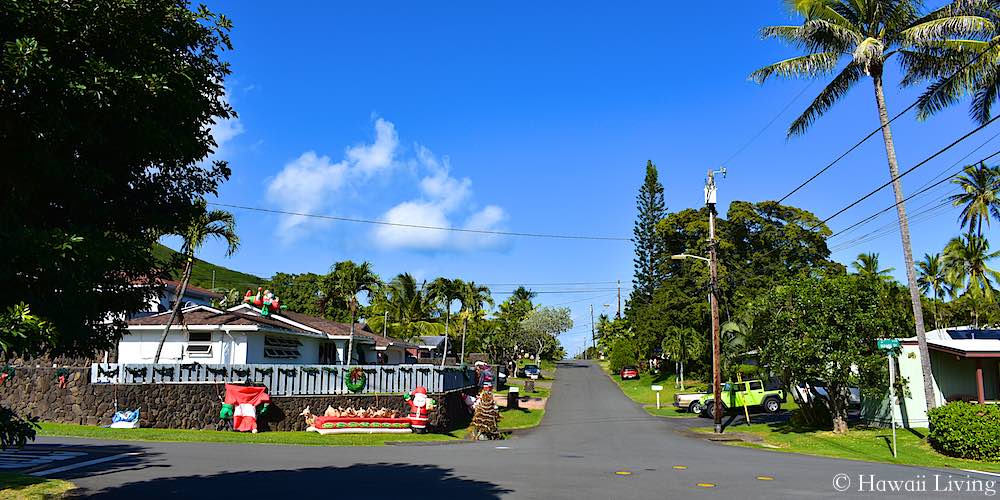 What makes this hillside neighborhood unique are the primarily large (7500 to 10,000 square foot) flat lots, an unusual find on Oahu. In 1959 and 1960, famous architect Vladimir Ossipoff designed several versions of 3-bedroom, 2-bath homes that were built on Ilimano and Iliaina Streets. His first and possibly only residential development, the houses, many renovated, enlarged and upgraded over the years, were each designed to take advantage of our lovely trade breezes. Just open the windows in the direction of the trades and nature’s air conditioning takes over. Many of these homes have ocean views – the higher up the hillside, the better the view.

A number of years later, it was discovered that, when Kalaheo Hillside was built on this extinct volcano, the fill used to build the neighborhood was not appropriate as it has a tendency to expand and contract causing shifts in foundations. The problem was corrected as much as possible although it is something to be aware of when buying real estate in this area.

This is a very peaceful, quiet neighborhood where kids safely ride bikes and skateboards and play in the middle of the streets as residents walk dogs and jog for exercise. The only through street is Iliaina Street. Follow it to its end just after it crosses Ilihau Street and you’ll come to the hiking trail to the bunker at the top of the hillside. The bunker has a picture of a beautiful woman painted on top – although it is fading now. The view from the bunker is spectacular taking in several fish ponds, Kaneohe and Kailua Bays and the Pacific Ocean.

Kalaheo Hillside starts at Kalaheo High School and runs between Mokapu Blvd. and Kaneohe Bay Drive and N. Kalaheo Avenue. A majority of the houses are an easy half-mile walk to one of the best elementary schools on Oahu (Aikahi Elementary) and the Aikahi Park Shopping Center on Kaneohe Bay Drive with a supermarket, several restaurants, and services such as a hair and nail salon, a wine and liquor store, a dentist, car repair shop, service station, etc. On the opposite corner is one of Oahu’s popular fresh seafood restaurants, Nico’s.

About one mile from Kalama Beach Park and two miles from Kailua Beach Park and downtown Kailua, Kalaheo Hillside is just a hop, skip and a jump to the H-3 which will quickly get you to Kam Hwy in Kaneohe, Daniel K Inouye International airport, Pearl Harbor and the leeward side of Oahu.

When you are looking for that luxury home in Kailua, if you take the high road, you are sure to find your paradise. Come move on up and in. You might be high above it all, but you’ll still be a welcome part of Kailua. 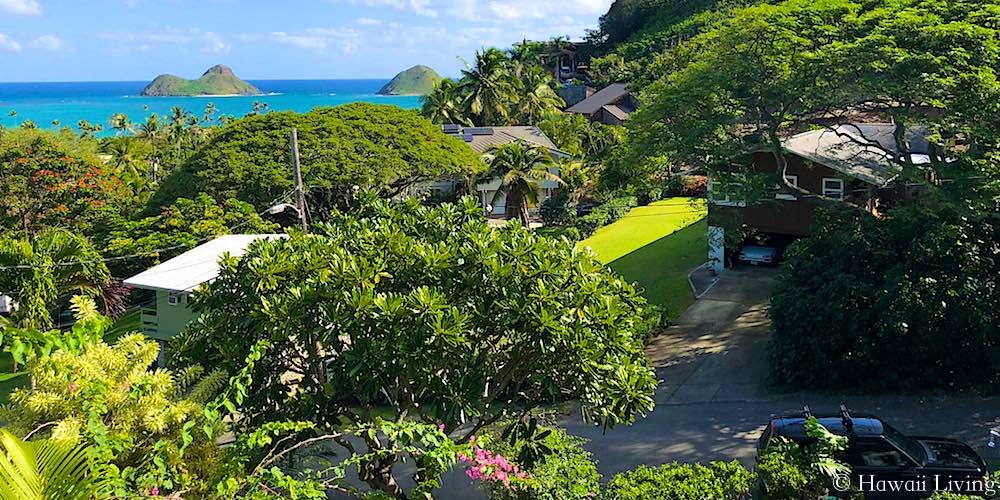 View from Lala Place in Lanikai