The Top 10 Reasons to Love Kaneohe 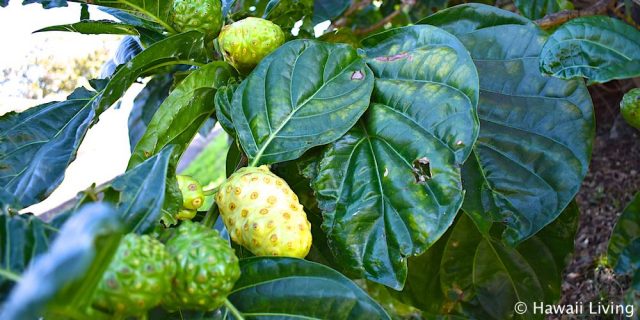 Kaneohe is a beautiful blend of contrasts. City and country, mountain and ocean, past and present, it’s all here in the second largest town on Windward Oahu. Windward Mall is less than 2 miles away from a cultural landmark, the Byodo-in Temple. A lush botanical garden sits minutes from the town’s commercial center. It’s home to ancient Hawaiian fishponds and bustling Marine Corps Base Hawaii (MCBH),There’s something in Kaneohe that will appeal to everyone, and the town’s many different facets may make it an ideal place for you to find a home!

Here are the top 10 things that set Kaneohe apart, and why visitors and residents love this place. 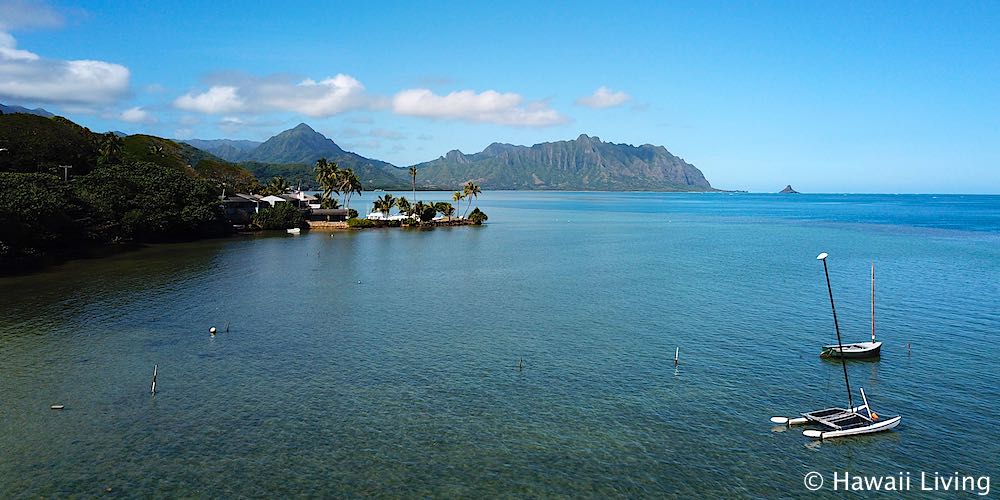 Kaneohe Bay includes the water on the northern side of Kaneohe MCBH and that stretches along Kaneohe’s coastline. The water in most of the bay is calm, making it a popular area for boating, fishing, diving, kayaking and paddling. There are really no beach areas unless you have access to MCBH, but Kailua’s beaches are just a short drive away. Many waterfront properties along the bay sit directly on the water’s edge with small docks where residents tie personal watercraft or launch kayaks, outrigger canoes, surfboards and paddleboards. The bay is home to Coconut Island, now a marine biology research facility for the University of Hawaii, where parts of the tv show Gilligan’s Island were filmed. From the shoreline and especially from the water,  you’ll enjoy stunning views of the calm, blue water and the lush Koolau Mountains. 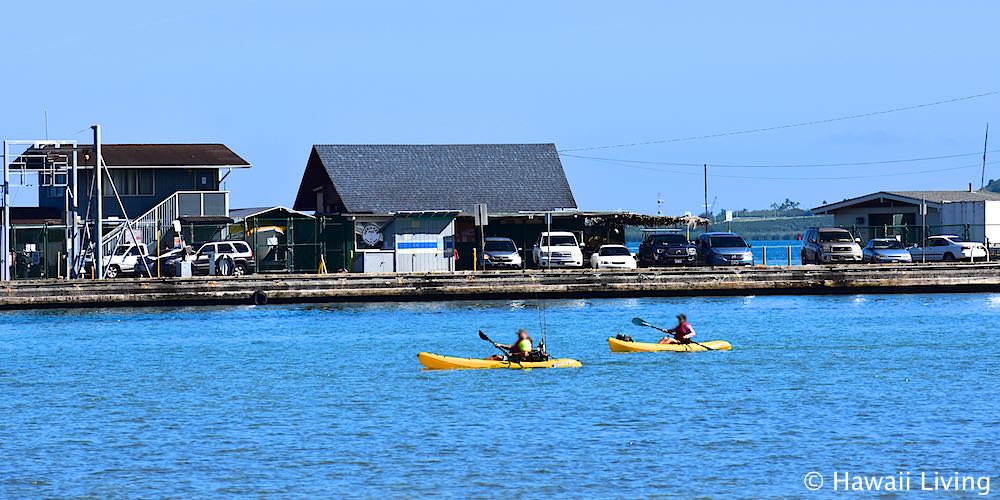 Kaneohe Bay Sandbar
The Sandbar is such a popular destination that it deserves its own mention. Located in the center of Kaneohe Bay about a mile from land, the naturally-formed sandbar is a picturesque place to spend an afternoon. You’ll need a boat or kayak to get there, making it feel exclusive (however on holiday weekends, it can get crowded).

Depending on the tide, the Sandbar is either completely exposed or covered by 2-3 feet of water. At low tides, the sand is exposed and it’s literally a beach in the middle of the bay, perfect for beach volleyball, sand soccer or touch football games, setting up beach chairs and soaking in the sun, or strolling from one end to the other. The area is surrounded by coral reefs so no matter what the tide, there’s great snorkeling, diving and fishing around the perimeter. Just be warned: the sun reflecting off the sand and water makes applying (and reapplying) sunscreen highly recommended! 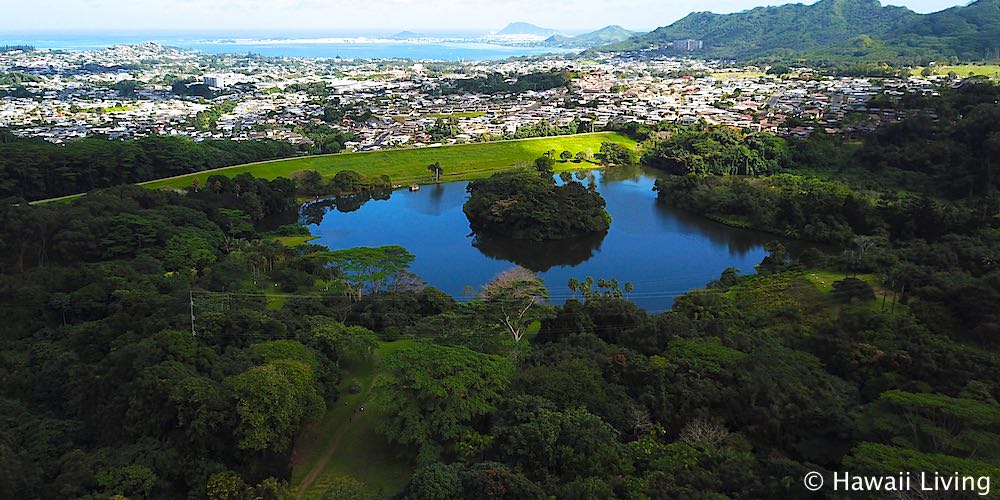 These botanical gardens are located at the base of the Koolau Mountains and feature a number of picnic and camping areas spread throughout the preserve. Visitors will enjoy lush, green landscapes and a variety of tropical flowers and foliage, one of the closest views of the towering mountains you can find, calming quiet, and cooler temperatures especially in the evening and early morning. Visitors can drive or walk the rolling hills and learn about the plant species that inhabit the gardens at the information center near the entrance. 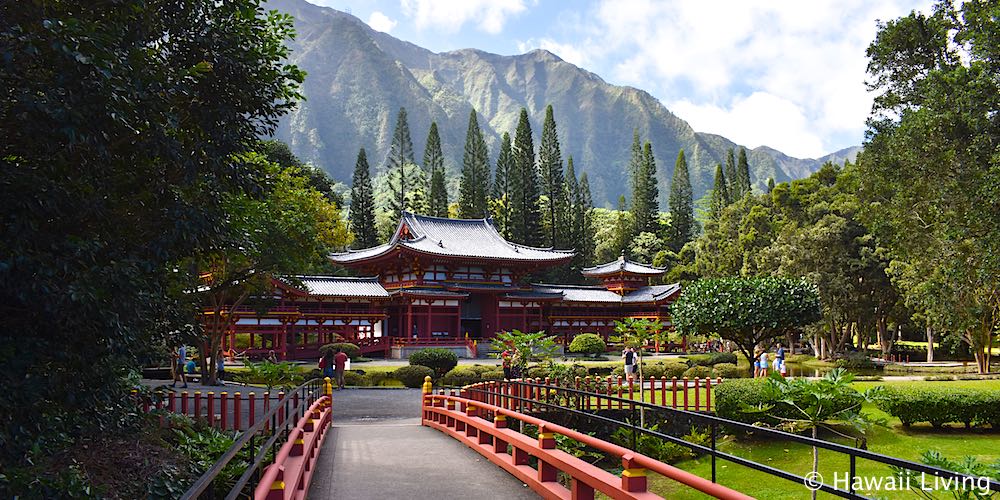 Built in the 1960s this is a scaled down replica of a 900 year old temple located near Kyoto, Japan that was constructed to commemorate the 100th anniversary of Japanese immigrants to Hawaii. It’s not a religious site, but visitors should be respectful of their surroundings. Like other Kaneohe landmarks, the temple sits at the foothills of the Koolau Mountains surrounded by a lush, tropical rainforest. it’s home to beautiful Japanese gardens, koi ponds, and white peacocks. Located in the sacred Valley of the Temples, it’s hard to escape the feelings of reverence and serenity that emanate here. This is a convenient stop for anyone driving up to the North Shore from Honolulu along the Kamehameha Highway. The temple is open every day from 8:30am – 5:00pm and there’s a $4/person entry fee. 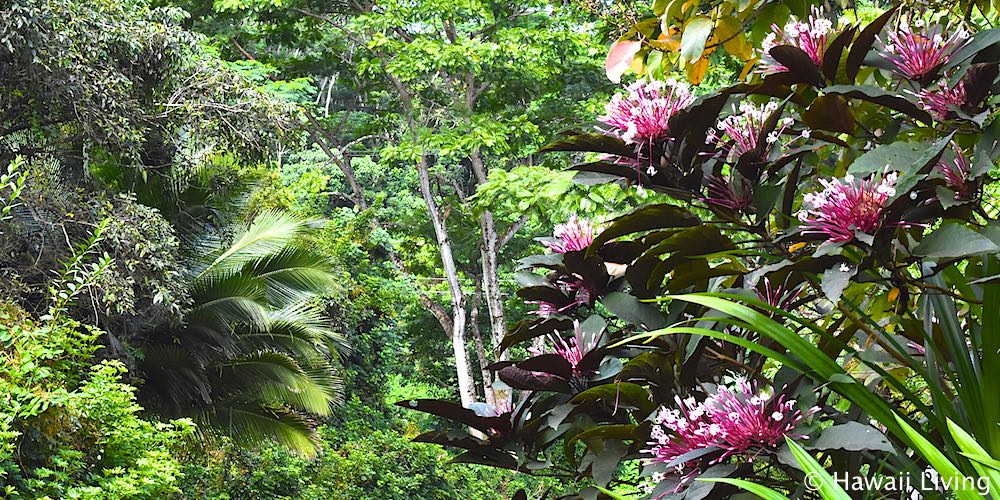 Kaneohe’s geographic location on Windward Oahu and at the base of the Koolau Mountains means that it gets a lot of rain and feels the cooling tradewinds year round. Due to the amount of rainfall the area receives, historically it was one of the island’s agricultural centers. While there is really no commercial farming in Kaneohe today, vegetation thrives in the lush landscape. Many yards are decorated  with tropical flowers, fruit like mangos, guava, limes and lilikoi growing on trees and vines, and gardens producing a variety of vegetables and herbs. 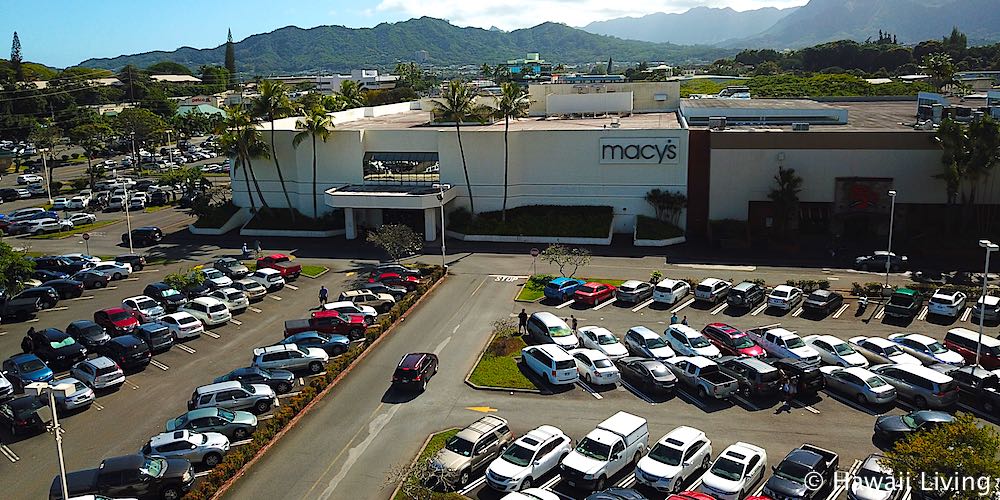 Kaneohe could be called the commercial center of Windward Oahu. There are a number of car dealerships and shopping centers along the Kahehameha Highway that runs through town. You’ll find grocery stores, drug stores, fitness centers, salons, a fabric store, a garden center, restaurants, medical offices, mailing centers – just about anything you could ever need for yourself, your family or your home is available in Kaneohe. Plus Kaneohe is home to Windward Mall, with a mix of local and big name stores and restaurants  including Macy’s, Sears, Bath & Body Works, Victoria’s Secret. Ruby Tuesday’s and Buffalo Wild Wings. It’s often referred to as ‘town hall’ because it’s such a community center, hosting holiday events, performance by schools, halau (hula schools), and musical groups. It’s home to a Satellite City Hall, movie theater, and a farmers market held on Wednesday and Sunday. There’s a children’s play area and a train will take you on a trip around the mall, which makes this a popular place for families with small kids! 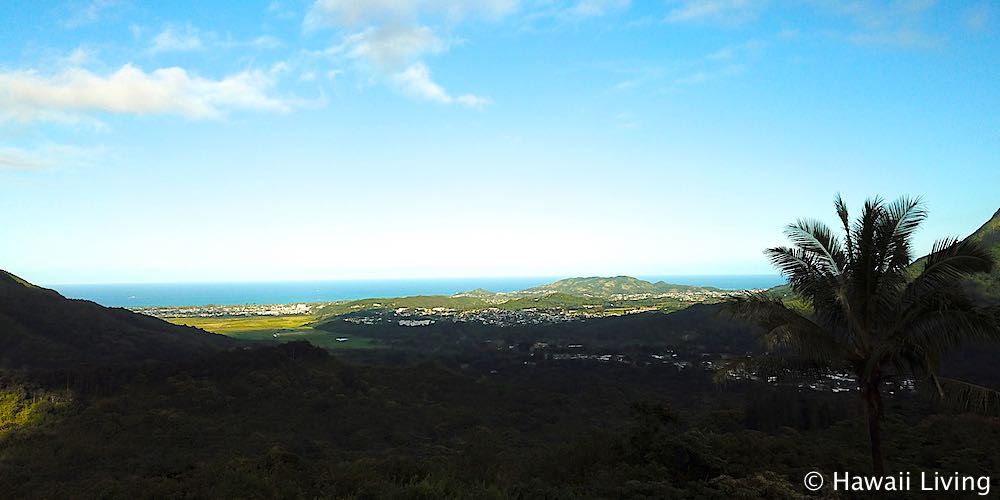 Getting to much of the island from Kaneohe is really easy. The Pali Highway runs right into downtown Honolulu, the Likelike runs into Kalihi, a neighborhood just west of downtown Honolulu, and the H3 connects the Windward side to central Oahu including Pearl City, Pearl Harbor Naval Base, and HIckam Air Force Base. All of these highways connect to the H1, which makes getting to Waikiki, Honolulu International Airport or West Oahu is just a matter of getting on the right highway. Kaneohe MCBH is right next door, and so is Kailua with popular beaches and shopping options that include Target and Whole Foods. 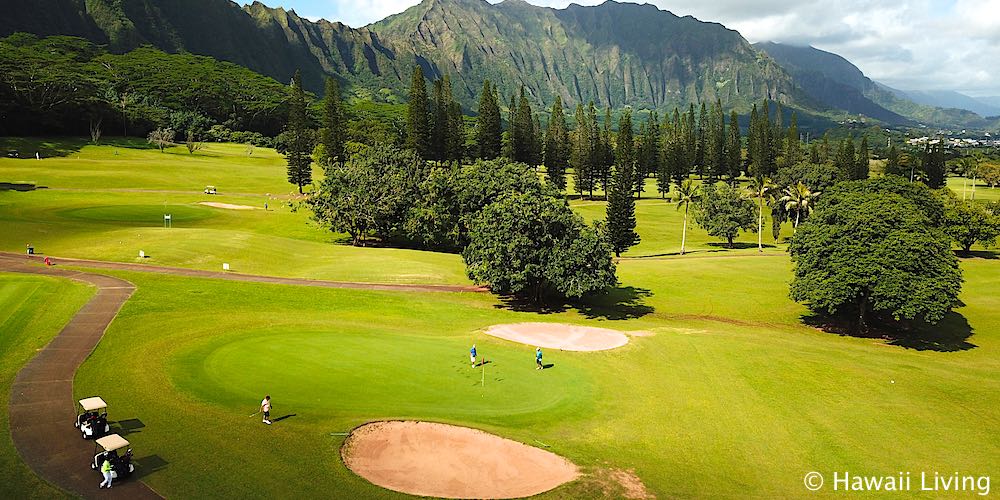 If you’re a golfer, or if you want to become one, there are 3 courses located in Kaneohe, and nearby courses in the Windward area. The Koolau Golf Club is a private 18-hole course located underneath the Nuuanu Pali Lookout at the base of the Koolau Mountains. It’s a stunning, rainforest environment that offers magnificent views of the Koolau mountains. It’s been named “One of the Top 100 Places you can Play” by Golf Magazine, along with other accolades. The Pali Golf Course is a public course that’s also located in the Koolau foothills. It’s a challenging 18-hole course that offers beautiful views of the mountains and Kaneohe Bay. Bayview Golf Course, a private 18-hole course, is situated on Kaneohe Bay. It offers beautiful water views, but water features and narrow greens make the back 9 especially challenging. This course is known for being a great place to work on your short game. It also features a driving range, mini putt golf course, and a zipline.

Other nearby golf courses include Olomana Golf Club on the Kailua-Waimanalo border, the Kaneohe Klipper Course on Kaneohe MCBH, Mid Pacific Country Club in Lanikai, and the Royal Hawaiian Golf Club in the Maunawili area of Kailua. 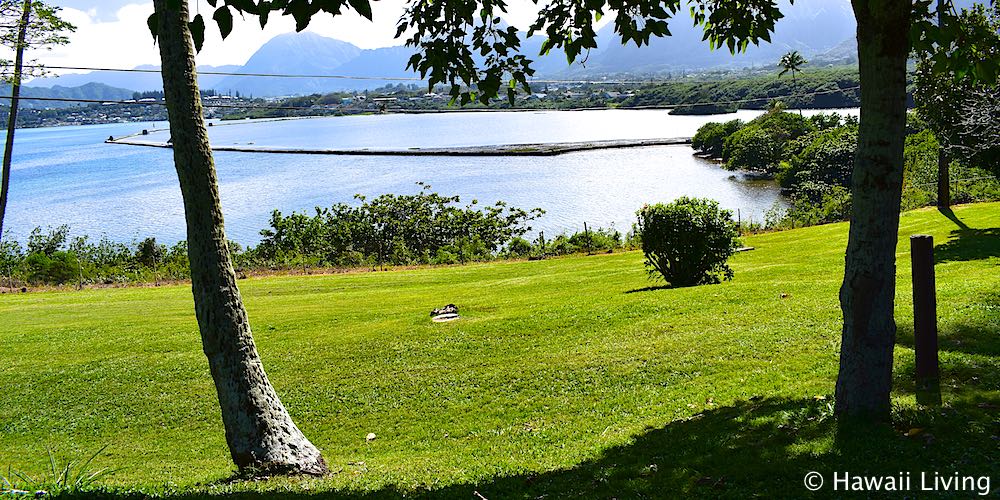 This 18-acre park fronting Kaneohe Bay offers more than amazing views and natural beauty, it’s also historically and culturally significant to ancient Hawaii. The park is one of the best places in Kaneohe for the public to access Kaneohe Bay and its abundance coral reefs. There is a pier where motorized  boats can launch and from the shore, the calm waters make it easy to jump into a kayak, on a surfboard or paddleboard.

Culturally, Hawaiian tradition tells us that this is believed to be a “leaping point,” a place where the souls of the deceased left the earth to reunite with their ancestors. The ancient He’eia Fishpond is located right next to the park as well. Educational programs are offered to the public here to teach about the importance of this area in a historical, cultural and geographic sense. There is much for residents and visitors to learn and experience here. 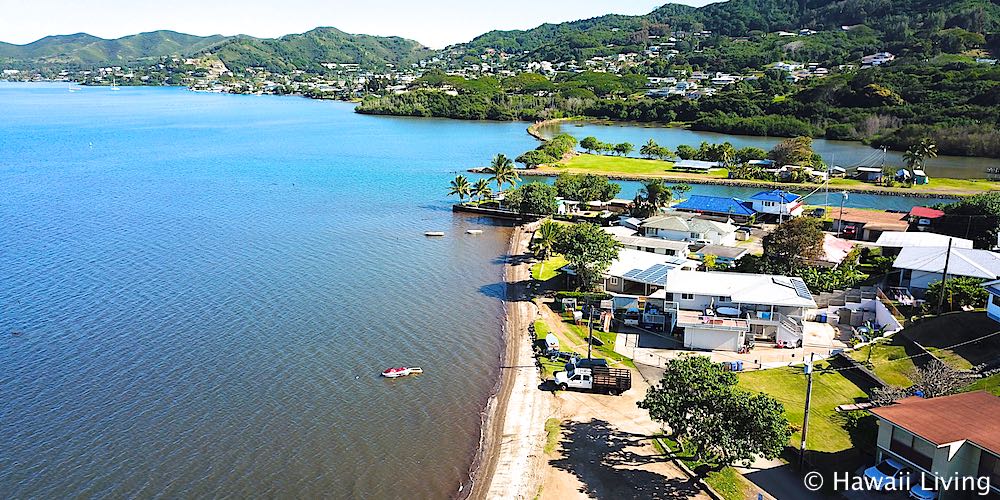 Real estate in Kaneohe offers the same amount of variety as you find in the town’s geography, landscape, and environment. People who want to live on Windward Oahu choose Kaneohe because prices are generally lower than you’ll find in neighboring Kailua, driving to Honolulu and many or the island’s military bases is convenient, and there’s a range of single family home, townhome and condo options to fit different budgets and lifestyles ,

The most desirable neighborhoods include Kaneohe Bay, Haiku and Temple Valley. Kaneohe Bay homes and townhomes stretch along the coast on Kaneohe Bay Drive and Lilipuna Road.  Kaneohe Bay is closer to Kailua (part of it is actually in Kailua) and MCBH. Homes in both areas offer amazing mountain and ocean views. Homes along Kaneohe Bay Drive are a little more spread out than Lilipuna homes. At the end of Lilipuna, behind the Safeway shopping center, are townhome communities like Poha Kea Point, Makani Kai Marina, and Kauhale Beach Cove, that offer ocean and mountain views as well as resort-style amenities like pools, tennis courts, fitness centers and  beautiful landscaping.

The Haiku area at the base of the mountains is known for being quiet, peaceful, and for its cooler, wetter weather. Conveniently, it’s also minutes from commercial centers along Kamehameha Highway. Homes are perched on the sloping hillside and many are enveloped by the green foliage that grows so abundantly here.

Temple Valley is quiet and peaceful like Haiku, but feels more country as it’s on the way out of town. Residents deal with a slightly longer drive and more traffic getting in and out at peak times, but if you’re looking for more space and more distance from urban areas, this could be the perfect option. Homes sit on larger pieces of land, are more spread out enjoy the rainfall and vegetation Kaneohe is known for. Condos in Temple Valley were designed to accent the landscape. Wooden buildings that are just 2-3 stories fit into this section of Kaneohe that is less developed, less commercialized than the rest of town.

Kaneohe is a gem on the Windward side. The mix of old Hawaii and modern living, urban development and country living, local families and new transplants to the island give Kaneohe a unique feel. The stunning beauty that’s here, from the ocean to the mountains to the undeveloped country is one of the first things people notice and it’s hard to forget!