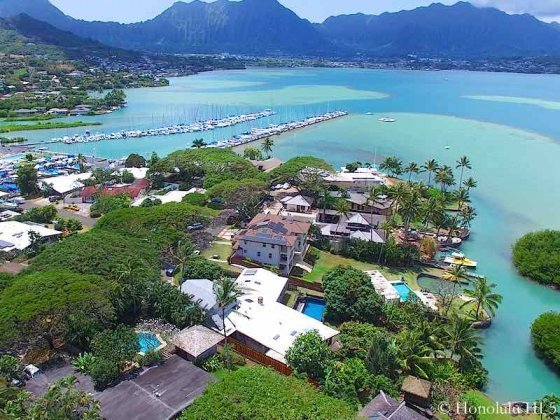 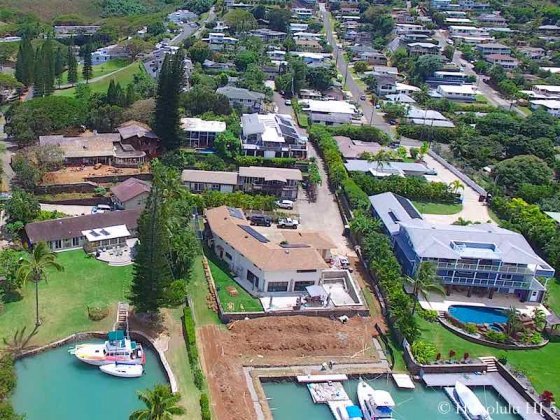 The Mahinui & Kaneohe Bay are technically separate neighborhoods, but there's no distinct separation, making it hard at times to differentiate where some homes fall between the two. Together,they take up the entire area beginning where Kaneohe Bay Drive crosses H3 to the Bay side, all the way along and immediately surrounding that major road, finally ending at Nanamoana St.

Kaneohe Bay's homes include some from the modern origins of the city, dating to the 1930's, all the way to houses that have only just been completed. They tend to be larger as their build date comes closer to present day, generally beginning at a low of just over 1,000 sq ft and expanding to almost 4,000 sq ft on the high end.

What distinguishes this community is that the vast majority of the properties are on the makai side of Kaneohe Bay Drive. Even if you don't live in an oceanfront home, chances are that if your home is in this neighborhood you still have ocean views, assisted by the way the land slopes down to the water. Not a bad perk.

The lots cover a variety of sizes, coming in at 6,600 sq ft on up to huge tracts that reach over 21,000 sq ft. Some of the larger ones lie on the oceanfront areas, providing an exceptional amount of waterfront property.

MAHINUI
Mahinui begins around where Aina Moi Place turns right off of Kaneohe Bay Drive. From here onward, the properties are more evenly divided between the 2 sides of the main road, ocean and hillside.

The houses show the same wide range of build dates, the one difference being that they start a little more recently in the 1940's. From then the residences were added at a fairly consistent rate in the decades since. This is a neighborhood that came together over time, united by every residents' desire to live on a beautiful coastline where families could be raised in peace.

It is a rare thing to see a 3rd story on any structure here, and the sloping terrain, both up the hill and down to the bay, keep the landscape open and the sightlines clear for all.

It's not all single family homes, either. Mahinui is known, in fact, for at least one significant condominium community that attracts buyers without trouble.

MAHINUI'S CONDO OPTIONS
Healani Gardens was built in 1990 on the northern end of Mahinui, providing a more affordable condo option to buyers. A multi-building community, they rise only 2 stories, fitting in perfectly with this area's open skyline. The 74 units are comprised of layouts of 1BR/1BA (553 sq ft) and 2BR/2BA (815 or 975 sq ft). Though low on amenities, the recreation area and playground make this a place kids are welcome.

In addition to the Gardens, a neighborhood called Country Club, which could almost be called part of Mahinui sits on the elevations above the Bay. Country Club more or less consists of two similarly named townhome communities, Yacht Club Knolls and Yacht Club Terrace.

Yacht Club Knolls is on the eastern side of this district, not far from where H3 and Kaneohe Bay cross. Sitting between the two roadways, the raised area it's on affords some units stunning views out onto the Bay.

Yacht Club Terrace, we should note, has the same layouts, with the exception of adding one more 3BR/2BA variation, with 1287 sq ft. Like its sister project, Yacht Club Terrace was built in 1973, but on a larger scale and directly on the hills above the Kaneohe Yacht Club. Almost double the number of homes, with 168, it consists of 27 buildings, with the same low-impact profile.

The parallel elevation gives many residences an outlook on Kaneohe Bay, including the picturesque lines of bobbing boats tied up at the Club below. It's a place to lose yourself in the view.

Mahinui's Outer Reaches
Though it is a little confusing, there is a separate section of Mahinui very near Ho'omaluhia Botanical Garden. There you'll find houses mainly from the 1960's to the 80's, all the ranch style or a two-story version with many of the same design features. More significant, however, is the new Mahinui by Gentry community.

3 layouts are in place in this recently completed collection of homes, all of the 5BR/3BA, with dimensions of 1,920, 1,997 and 2,000 sq ft interiors. In addition they feature 161 or 198 sq ft backyard lanais. Each house has modern green features, like solar panels, solar hot water systems and Low E windows.

From these residences you gaze past the Botanical Garden to the Koolau Mountains green covered heights. This location is also just down the street from H3, making commuting a less frustrating process, which is worth a lot on its own.

Kokokahi is made up of the homes on Kokokahi St, which runs mauka off of Kaneohe Bay Drive, as well as the T-shaped Likeke Pl that sits directly across that same main street. Those Likeki Pl homes are, if not oceanfront, mere yards from the water and have views of the Bay themselves.

Mikiola is also made up of houses on both sides of Kaneohe Bay Drive, with many oceanfront homes. It is also the product of building over the decades from the mid-20th Century to the current time. It also skews to layouts of 1,000 to 2,000, with some exceptions. One reason is that a majority of lots keep to 5,000 to 6,000 sq ft, but here and there some go to over 9,000 sq ft. No matter what size, the ocean vistas so many enjoy here, if not sitting right on the Pacific itself, compensate for any smaller room.

WHAT TIES IT ALL TOGETHER
A lot of ground has been covered here, in every sense. What's clear is that these neighborhoods have much in common – a true community feel, views of the ocean and mountains that are pure Windward Oahu and a location on a crossroads of Kailua and Kaneohe that makes it easy to indulge in the best of both. There's much to see here, so why not get started?

You may also be interested in....
Lilipuna homes, Alii Shores homes and Lulani Ocean homes.   Alternatively, search homes for sale in Kaneohe or expand to search all homes for sale on Oahu.