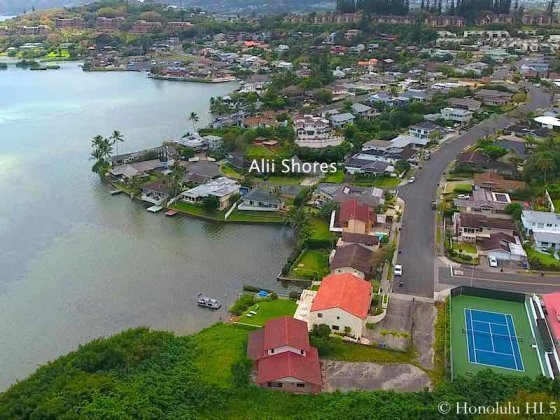 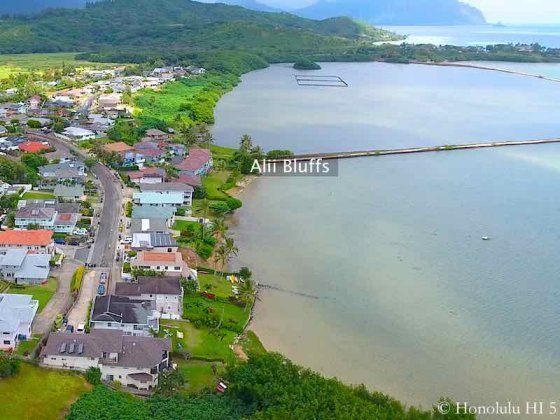 See our aerial tour of Alii Shores and Alii Bluffs.

For whatever reason, Kaneohe is frequently seen as 2nd Place to its neighbor Kailua. Maybe it's the presence of an actual mall and shopping centers, which clashes with the image of the genteel Windward Side. It is true that there is more pavement and taller buildings here, but that's just one side of this town. There's a lot of Windward in Kaneohe, too.

ALII SHORES
The word Shores says it all. These homes sit on streets that slope upward from where Kaneohe Bay washes up to land. The first houses dotted the landscape in the early 1960's, with most lots being occupied by the following decade. Most structures are the original occupants, but you will find rebuilds from the last decade as time or the new owner's wishes dictated the change.

This is an unmistakably upscale neighborhood, as expected in a place with these kinds of views. That's also reflected in the size of some of the homes, with dimensions regularly exceeding 3,500 sq ft. The lots are no less impressive, most beginning at a little over 7,600 sq ft and going up from there! You've got room to indulge both in and outdoors.

ALII BLUFFS
Further to the north, with those same beautiful views of the Pacific is Alii Bluffs. The real estate is a little more affordable, but it still remains a higher end area. The houses tend to be smaller comparatively as well, but still good sized, customarily 2,000 to 3,000 sq ft inside their walls. The lots maintain the large sizes, however, granting that openness that isn't just a feeling, it's a reality for you.

The build up followed a similar pattern as well, starting in the mid-1960's and mainly finishing by the late 70's. Again, you'll still find individual houses after that date due to a variety of reasons.

The Alli Cluster Park complex, put up in 1972, is found here as well. It features townhomes of both one and two stories that have a wide open views over the protected He'eia Wetlands to the pristine mountains. Theirs dimensions a good as well, with 2BRs of 946 sq ft, 3BRs of 1,120 or 1,199 sq ft and large 4BRs with 1,310 sq ft inside.

2 Kaneohe Neighborhoods With a Singular Attraction
One factor unites these two serene neighborhoods and it is this – residents don't like to leave. Life is good here. Homes do come on the market, but not at the frequency you'll see elsewhere. Even a brief visit to either one of these places will tell you precisely why. Good neighbors, roomy dimensions inside & out and the ocean dancing down the way, just to start. Look closer and, we guarantee, it only gets better.

You may also be interested in....
Lilipuna homes, Kaneohe Bay homes and Lulani Ocean homes. Alternatively, see a list of all homes for sale in Kaneohe and another list with all Oahu homes for sale.