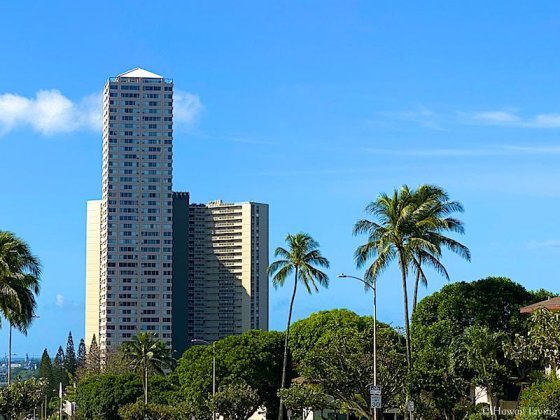 Both Aiea and Pearlridge are communities with unexpected real estate strengths. The greatest might be the fact that there's so much more to their living spaces than you'd ever guess just from frequenting their many shopping centers.

Outsiders think of Aiea primarily in terms of the modern landscape clustered around Kamehameha Hwy. Though that is a central part of the neighborhood, the majority of Aiea's condo are not contained there. To find them you have to head up into the hills.

There are actually 2 main hillside communities that bookend the town. The first, on the east, is Aiea Heights. Up here, past the old homes that made up the original neighborhood, are a number of townhome communities, most built in the 1980's and 90's.

A good example, almost at the top of the hillside, are the Lapa'olu Aiea Heights townhouses, all with 3 stories and some with views that only these airy altitudes could afford, including Pearl Harbor and the ocean beyond. Their 94% Owner-Occupancy says it all.

Aiea's western bookend is the Newtown neighborhood, where you could be straying into Pearl City's domain at some point. Here you have the use of a private rec center and fitness facility the residents enjoy, while living in townhome units in places like the Newtown Villa I and II. This duo has 92 units total in them, all 2 story, and roomy 3 to 5 BR layouts. Up here you can relax in peace, far from the busyness of the traffic below.

Pearl City condos are equally deceptive as Aiea's, your attention taken by the towers that dominate what you see on the highway. There are those more expected buildings like the Lehua Nani, with its 9 floors of solid concrete facade, located just to the north of H-1 in Pearlridge-Upper.

There's also the less apparent like those in Pearlridge-Lower, which is the lands south of the highway. Here the condos are all low-rise like the College Gardens townhomes, just 2 stories in each of its 11 buildings. They benefit from a much greener environment, surrounded by Leeward Community College and a wildlife refuge. Those ocean views don't hurt, either.

The takeaway is that you cannot judge the residences of these two towns just by the main strip, as dominating as it is. Behind and beyond those modern concrete buildings and concrete sprawl are a richer variety of real estate than you'd ever expect. One of these discoveries just might be the home for you.

Besides Pearl City, another popular condo neigborhood in the Aiea / Pearl City region include Waieu.