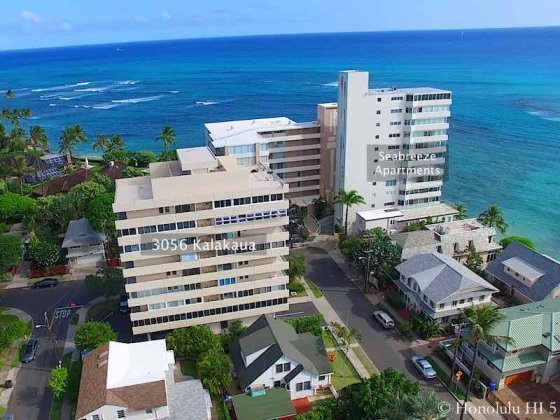 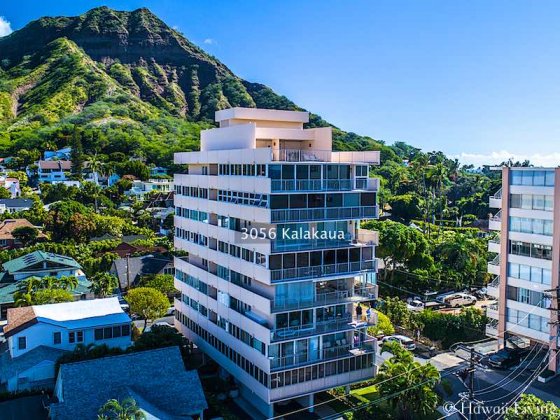 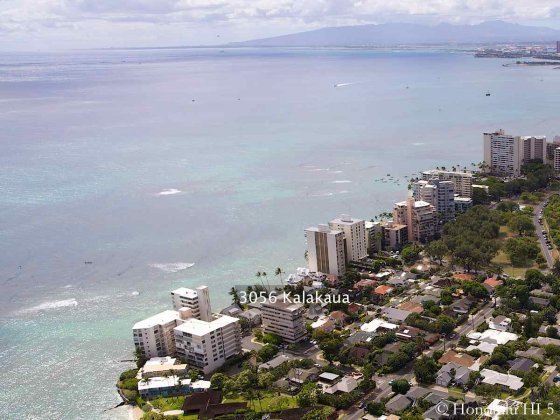 About 3056 Kalakaua
Much of the time you probably have a better chance of getting tickets to the Super Bowl than a condo at 3056 Kalakaua, believe it or not. It's known for rarely having units on the market, for sale or rent. It's not just because of few number of condos there, either.

For one, there's only 2 units per floor, giving you not only greater privacy, but also space. All are 2BRs, with floor plans between 1012 to 1400 sq ft, depending whether the large 390sq ft wrap-around lanai has been enclosed or not. That's another entire living space that, for some units, partially faces out on the reason this coast is so golden – those magnificent ocean views. Don't forget the awesome sight of Diamond Head sitting proudly behind you, either.

This address also places it right outside Waikiki, close to the tasty restaurants and designer shopping of that district, along with the natural recreation space of Kapiolani Park. People may complain about the development in Waikiki, but this park has always had the unconditional love of locals for its wide open fields with enough room for any activity.

You'll notice that 3056 Kalakaua has a very high percentage of longtime owner-occupants who make sure the building is always well maintained. Maybe that's why the maintenance fee is so much lower than other nearby condos.

Although not directly on the water, this is a residence with everything that makes the Gold Coast such a magnetic piece of real estate. Believe us, it's worth the wait to get in here.

You may also be interested in....
Queens Court at Kapiolani, Kainalu, La Pietra, Oceanside Manor, Diamond Head Landing and Tahitienne.

Here is a list of all Diamond Head condos for sale and another for all Honolulu condos.