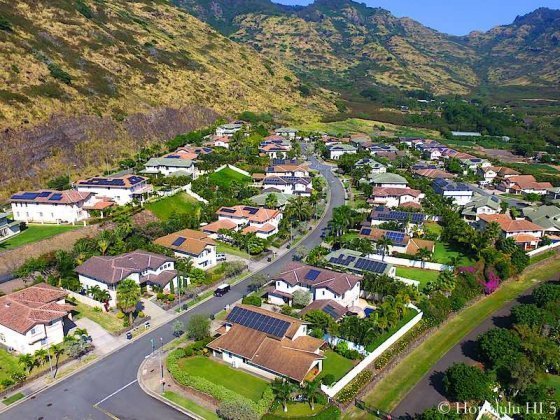 About Kamilo Nui
Kamilo Nui refers to the valley neighborhood just north of the adjacent Kealaula Kai neighborhood. Kamilo Nui includes ‘Leolani’, one of Hawaii Kai’s very few newer (2003-2004) residential single family neighborhoods, nestled along the mountain side on the west side of Kamilo Nui Valley.

Take Hawaii Kai Dr north past the Hawaii Kai post office, past the Anchorage neighborhood all the way to the end towards the back of the valley.

‘Leolani’ means ‘aristocratic’, but also ‘heavenly voice’ and is written in big letters on a lava rock wall greeting visitors when entering the Leolani subdivision at the corner of Hawaii Kai Dr and Paila St.  The new Leolani subdivision includes all of Kuekue St, Hilala St, Manu St and Kaolo St.  Contrary to common belief, Leolani is just part of the general Kamilo Nui Valley neighborhood. Because of its prominence, Leolani will receive our full attention.

It was received with great excitement when popular developer DR Horton Schuler Homes, announced this new ‘Leolani’ subdivision of 60 brand new Hawaii Kai homes. Schuler Homes had been developing homes in Hawaii since 1973, including well known projects mostly on Oahu’s west side in Kapolei and Makakilo.

Insight to Kamilo Nui Homes & Neighborhood
Three gorgeous award winning model homes plus the sales center were the first new Leolani homes completed early 2003 between 1015 and 1031 Kuekue St, just left after entering the new neighborhood. All 60 homes were built and sold out within two short years. By spring 2005 the final remaining model home had been sold. Hawaii’s real estate market was hot at that time. Both, developer and local realtors alike wished they had more of these beautiful homes to sell.

Some unexpected difficulty was encountered in preparing the flanking hillside west along Hilala St.  The mountain side is made up of dense blue basalt rock that took extra time and effort to chisel away to create level buildable home sites.  A concrete drainage ditch with heavy fence on top was installed at the bottom of the steep mountain to protect the homes from rain runoff and possible falling rocks.

There are five Leolani floor plans that rotate in slight variations seemingly random throughout the Leolani subdivision:

While most these floorplans had been offered in some of the developer’s previous west Oahu developments, the largest Maestro model was a stunning brand new edition never seen before.

All five floorplans are 2-story designs and include a 2 or 3-car enclosed garage.

The majority of homes feature central AC and a great number of them installed rooftop PV systems.

Most of the home lots range between 7,500 and 10,000 sq ft with a few even larger odd shape perimeter lots enjoying a generous size yard.

All lots are graded and mostly level, but the neighborhood is gently terraced up towards Hilala St in the west.  Some of the slightly elevated homes on Hilala St enjoy pleasant views overlooking the Hawaii Kai Marina and the impressive Koko Crater across the valley.

There is a nominal $135 / mo (2016) Leolani association fee to maintain some green belts and landscaping.

The rest of the Kamilo Nui neighborhood is hidden behind the Leolani subdivision.  Several plant nursery acreages are tugged away deep in the back of the valley.  Hard to get to and completely separate from the newer Leolani development, these large leasehold agricultural lots owned by Kamehameha Schools have been there for years. Many Hawaii Kai residents aren’t even aware these nurseries exist.

We like these newer Leolani homes for their impressive fine architectural details along well maintained streets and their quiet location within Kamilo Nui Valley.
Check them out, we think you will enjoy them too.

You may also be interested in....
Koko Villas homes, search all Hawaii Kai homes for sale or expand to all Honolulu homes for sale.