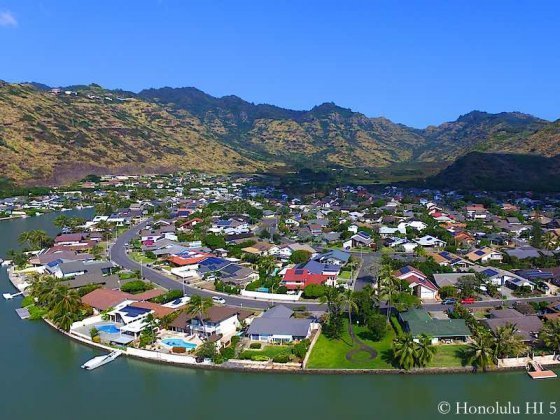 See our Mariners Cove video from above.

Mariners Cove is one of Hawaii Kai’s popular residential marina front neighborhoods, spread along the north eastern back portion of the Hawaii Kai Marina. There are two sections to the Mariners Cove neighborhood with a combined total of 410 homes:

2. Mariners Cove along Kalanipuu St, includes all homes from 642 to 798 Kalanipuu St, as well as all of Kaumaka Pl and Koamano St, and all even street numbers from 610 to 800 along the north (marina side) of Lunalilo Home Rd.

Insight to Mariners Cove Homes & Neighborhood
Mariners Cove was developed starting in 1968 with the very first home at the entrance to the Mariners Cove Peninsula at 7079 Niumalu Loop on the corner of Kamilo St.  This home was once the original model home and represents a typical 3-bedroom, 2-bath Mariners Cove simple single level home with 1,459 sqft interior living space on a 7,551 sqft level lot.

Within just three short years between 1969 and 1971 the neighborhood was completely built out with no vacant lots remaining. Only a handful of single level and 2-story floorplans such as the popular ‘Windjammer’ and others appear in slightly different configurations or in a reverse layout throughout the neighborhood.

A good number of homes have been modernized and expanded over the years, especially in some of the more desirable marina front locations. Even after additions have been completed, you can often still recognize the original underlying floorplan.

To maximize marina visibility, these Mariners Cove mini parks are strategically situated along the marina where cross streets meet Niumalu Loop and Kalanipuu St.  Look for these parks at Opoi St, Paoo St and Koamano St.

The Mariners Cove Bay Club includes a 121 person capacity clubhouse, a large lap swimming pool, kiddie pool, BBQ grills, a boat launch ramp, and a boatyard with a 25 boat capacity. Boat stalls are available for rent at $25 per month (2016).

Come and experience the best of Hawaii Kai waterfront living.

You may also want to see...
All Hawaii Kai homes for sale or expand further to search all homes in Honolulu.