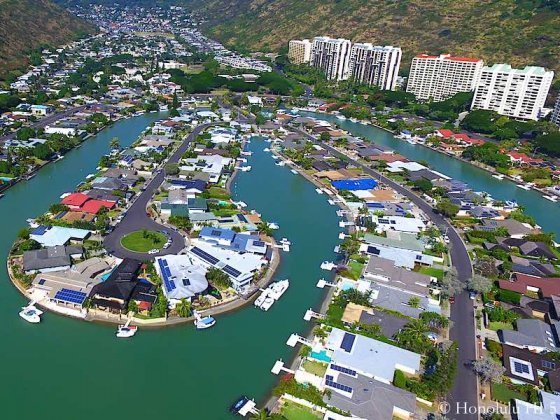 See our Spinnaker Isle video from above.

The Spinnaker Isle neighborhood in Hawaii Kai is a residential marina peninsula located just south of lower Hahaione Valley. Look for Kumukahi Pl to enter the neighborhood off Hawaii Kai Dr.  Kumukahi Pl splits into two sections, both running parallel to each other like two fingers protruding south into the Hawaii Kai Marina.

The Spinnaker Isle marina front neighborhood was designed in a shape that maximizes the number of homes located directly on the marina. In fact, all 92 Spinnaker Isle homes are marina front homes, on both sides of the street, running along both, the eastern and western section of Kumukahi Pl.

Insight to Spinnaker Isle Homes & Neighborhood
Just about all original 92 Spinnaker Isle homes were built between 1968 and 1970. All of the original Spinnaker Isle homes were designed as single level homes on generous level lots ranging between 7,190 to 9,800 sqft.  Five or six lots located at each tip of their respective finger enjoy some wider marina frontages due to their unique pie shape. The homes between 559 and 609 Kumukahi Pl enjoy a somewhat superior wider marina view with greater distance across the water to the homes along Kaiolohia Pl.

Most of the original single level homes range between 1,460 to 2,600 sqft interior living area. A few homeowners over the years have added a second story addition, but the majority of the Spinnaker Isle neighborhood has remained single level, for now.

812 Kumukahi Pl located at the tip of the eastern finger sits on a 10,483 sqft oversize lot zoned R-5. The original home was torn down and two brand new legal attached 2-story single family dwellings were built in 2000 with a combined 7,000 sqft interior living area (now 812 & 814 Kumukahi Pl). The double home sold just shy of $2.5Mill in 2005, a record sales price for this neighborhood.

The Spinnaker Isle subdivision has all been built out since the early 1970’s. There are no vacant buildable lots remaining today.

Some similar marina front neighborhoods in Hawaii Kai include Anchorage, Kealaula Kai and Mariners Cove. Alternatively, search all Hawaii Kai homes for sale or expand further to all Honolulu homes.