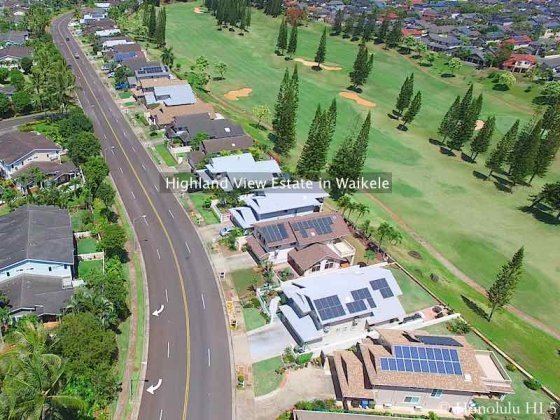 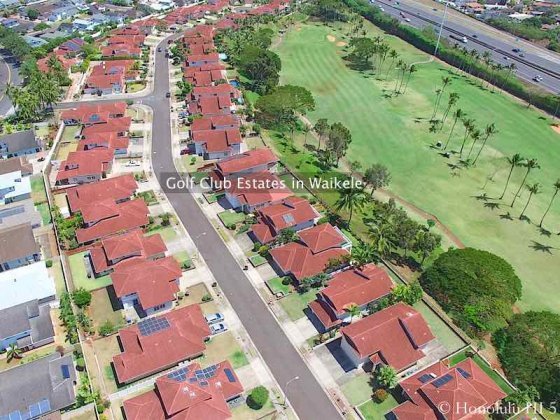 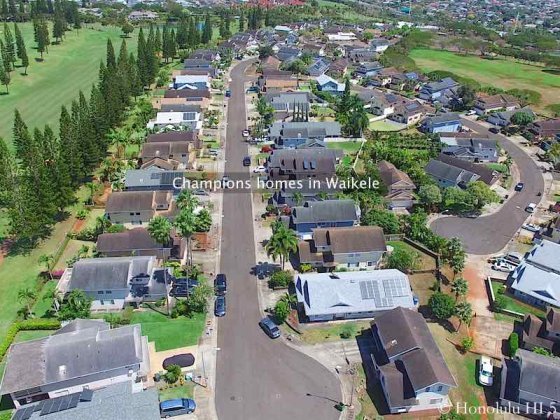 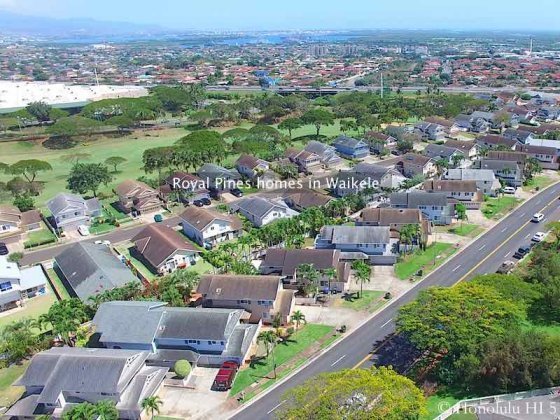 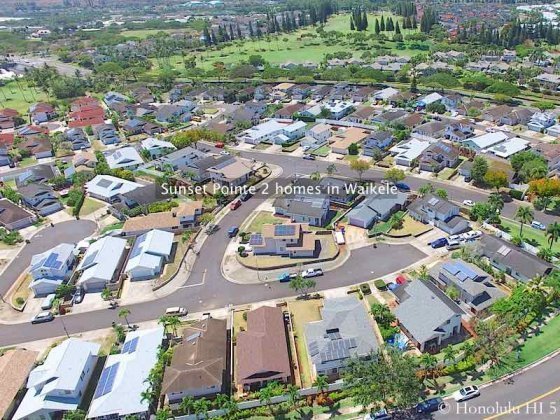 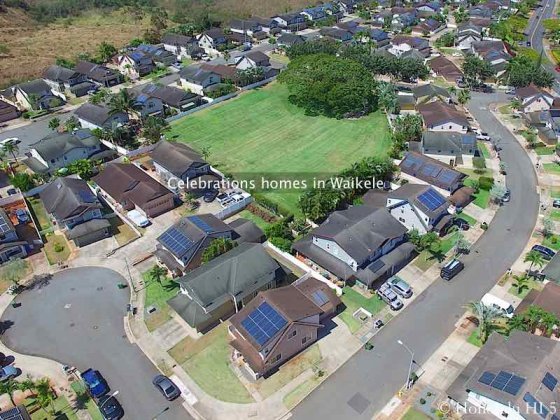 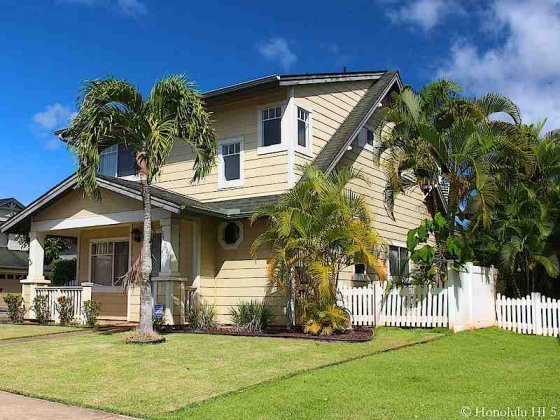 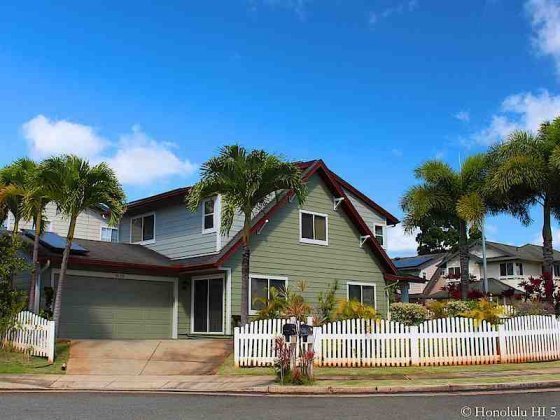 See our aerial video of Waikele homes, which shows all the different sub-sections of single-family homes within Waikele.

About Waikele
Waikele is a standout community directly north of the West Loch of Pearl Harbor. Although officially part of Waipahu, it looks nothing like the rest of the town. Where most of Waipahu is urban and largely paved over, Waikele is a green, suburban environment, an emerald in the midst of a sea of gray concrete.

The neighborhood came to life in the decade between 1990 and 2000, making it one of Oahu's youngest communities. The look reflects that recent origin in many key ways. One you might not even notice consciously at first is that the utilities were laid underground, keeping the streets free of the clutter of poles and wires. The absence has a profound effect on the atmosphere here, opening up the views and horizon to a much more natural, elegant look. It's a perfect example of the power of addition through subtraction.

Your surroundings are an outgrowth of the fact that the homes were built around that greenest and cleanest of activities - golf. It was the Waikele Golf Club that served as the original anchor around which the neighborhood was built. The green theme is kept consistently throughout in the many small parks and green belts scattered within the different subdivisions. Wherever you are, you've got a grassy place, or two or three, to go and picnic or just take a breather on those days that call for it.

You walkers will find that you're in a neighborhood created for those who enjoy a stroll to take in the scenery or just work things out. The sidewalks are wide & plentiful and the suburban lawns and open spaces make for a soothing turn around the area, no matter which part of Waikele is home. Be ready to wave to neighbors or even fellow residents you don't know (yet). It's that kind of place.

Waikele Home Options
You have choices between houses and townhomes, which share a consistent look that defines the community the moment you cross into it. The desire to create a sweeping sightline across Waikele produced not only the invisible utilities, but also the lack of high-rises anywhere in the borders. So your view is usually clear not only out but up.

Waikele real estate tends to run higher than some of the other Oahu neighborhoods of comparable age and size. Houses are valued from $600K to $900K, with the townhomes priced from $300K up to $500K. The higher pricing is from more than just the benefits we've covered already, however.

One additional advantage that you get here is in your commute time. Other communities built in recent years have their strengths, but proximity to Honolulu, where most work, isn't one of them. Waikele is right on H-2, which quickly gets you to H-1, and on your way east. The savings on the time in your car, and the stresses it brings, can pay you back many times for the extra outlay, just in the first year alone.

That fast track to the freeways means more than just a quicker trip to the office. Combined with Waikele's location toward central Oahu, you can be up to the North Shore's famous swells and picturesque scenery in no time. Or west to Kapolei and the beaches of Ko Olina. As they say, it's all about Location, Location, Location.

Live in a Tourist Destination - All the Benefits & None of the Crowding
Amenities? The shopping is so good where you live, tourists come by the busload from Waikiki just to get a few hours in here. You, though, can probably walk to it. Anytime. Waikele Center and Waikele Premium Outlets have far more stores than we could name in this space. We will point out that there are 50 outlet stores in one and the other features not only Lowe's, K-Mart and a host of other stores & eateries, but also doctors' offices.

Our guarantee is that you'll find the shopping just as alluring as our visitors from off-Island. Check this item off your Oahu Real Estate Want list because it's taken care of.

All of this walking and browsing, luckily, you'll do so in cooler temperatures than lower Oahu due to the elevation of the land. As much as you love the tropical weather, the lift in climate is a sometimes subtle, but always welcome feature of Waikele.

Residents are drawn here by the dream of being part of a real neighborhood, not a collection of houses. In Waikele you're in a place that truly lives and breathes, through the green spaces that surround you, the wide open skyline and the sights & sounds of your neighbors out on the lawns and sidewalks. The one thing that'll bother you is why you didn't look into Waikele sooner.

You may also be interested in....
Royal Kunia homes, Mililani Mauka homes or check out all Waikele townhomes for sale.


Waikele History
From the green spaces and bright skies that define Waikele in the 21st Century, it's difficult to realize that there have been deep secrets in its past. Its early history, in Ancient Hawaii, isn't as clear as other areas of Oahu. What has been established is that the Waikele Stream was very important because it was used to irrigate taro terraces that were here, which provided a main staple of the Native Hawaiians' diet.

This activity would continue after the arrival of the Americans and Europeans, but now another community would spring up in this area, again based around a food source. The waters of what would become Pearl Harbor were famous for their bountiful fish, something the Hawaiians had known for some time.

With the introduction of horses and carts, the distance to Waikele was no longer out of reach for those who worked there. A fishing village emerged due to this commuting improvement, adding a greater population than ever before. Those residents would move on, however, once the lands were acquired by the Oahu Sugar Company at the end of the 1800's.

The profitability of the crop had caused its takeover of most of the local economy for the next few decades. Unlike many other areas of Oahu, the operations persisted until the 1990's, making it one of the longest lasting on the Island. What wasn't known for most of the mid-20th Century was that right up the road was one of our most guarded National Secrets. Right in Waikele.

The buildup of the military in the immediate pre-World War II years included a mammoth project – carving out tunnels and storage containers in the rocky hillsides of Kipapa Gulch. In these gigantic chambers the US Navy stored not only regulary munitions, but atomic weapons. The proximity to Pearl Harbor made it the perfect place for quick transfer, while removing it far enough to keep it protected and safe if the base was attacked.

They were finally closed down in 1993, but some of those hillside chambers are now available for self-storage. You can safely stow your extra furniture and old dishes where once our nation's greatest firepower was kept under Top Secret conditions.

The Waikele we know and love today was planned and built quickly after the last sugar harvest was done in 1995. The town sleeps very well each night in the cool breezes here, maybe a little more soundly knowing that their nuclear neighbors have left for good.