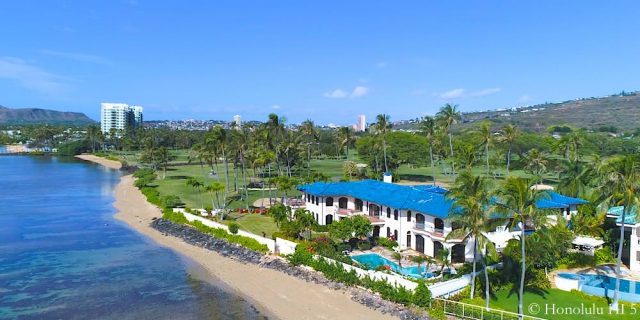 Everyone knows that Honolulu real estate is some of the priciest in the US. That fact makes you wonder what is the ceiling in a market like this – and what do you get for it? Wonder no more. We’ve assembled the 9 most expensive home sales in Honolulu over the past 5 years, collecting the kinds of properties that even the super-rich would find enticing. If you’ve ever wondered how the other ½ live, or the other 1%, then prepare to find out just what life can be like at the very top. 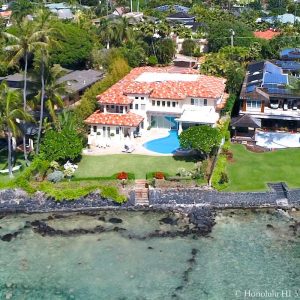 The location of this home is enough for most to understand why it’s on this list. This property is on the immediate east side of Black Point and just before where Kahala Avenue’s makai begins its famous strip of oceanfront mansions. 4375 Royal Place straddles two very exclusive neighborhoods.

The space easily impresses, with over ½ an acre of land right on this extraordinary slice of the coastline. The house itself takes up 7100 sq ft of that, with 5 bedrooms and 6.5 bathrooms across its two floors, plenty of room for family and visitors.

It’s clear that this residence is for active pampering with its exercise room, steam room and partially covered pool so you and your guests can take a dip even in high sun or the rain. Pocket door sections of the walls can be opened up to fully unveil the ocean views to the home or allow the breezes to come in and greet you. Even those winds will be impressed to see inside this home. 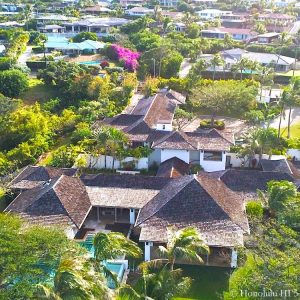 Perched halfway to the end of this eastern bookend of Maunalua Bay, it should be no surprise that it is right on the water. What may raise some eyebrows is that it includes almost 2 acres of property there, all of it looking right into the Pacific that washes right up to its shoreline.

This is a Honolulu home made for those who live at a certain level. The 7 bedrooms/6.5 baths include 2 Master suites, private guest suites and a nanny or maid apartment as well within an interior of 10, 100 sq ft. There are also water features around the house, such as a pond that sits directly against the dining room. Sliding pocket doors allow you to open the room up and bring the pond into your home.

The water theme extends to an L-shaped infinity pool with Italian tiling, its modern elegance allowing it to double as an artistic feature as well as a recreational one. End a day here sitting on the grand lanai spaces, gazing out on the waters as the sun sets over it. You’ll understand the price tag of this place, no question. 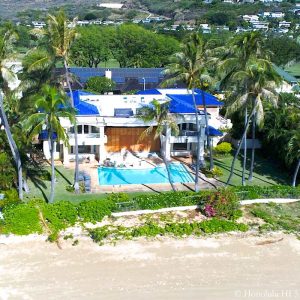 This property is on the most desirable end of an already top-level Honolulu neighborhood, found just before Kaimoku Pl dead ends against Waialae Golf Course. Better still, it’s on the makai side of that road, putting it directly on the beach, with the Pacific washing up mere feet from your backyard.

The placement beside Hawaii’s most elite country club and an equally upmarket section of Oahu’s coastline means an elevated asking price. Add 7,457 sq ft of house on almost 19K sq ft of beachfront land here and the sky becomes the limit.

What may not affect the price tag, but certainly the pleasure of owning this home is the shoreline waters aren’t as rocky as areas right around it. Kahala’s beaches have a common complaint about this, but in front of your abode, it’s good wading. Hard to put a price on that, but $17M might be close. 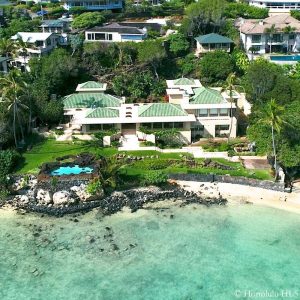 The land this house occupies is right on the border of where Black Point and Kahala meet, so you’ll see it listed under both neighborhoods. What isn’t debatable is that this oceanfront lot is on a part of this coastline that gives the residents a perspective only they and a few neighbors can enjoy.

There is little beach here and its placement on the east side of Black Point places it away from the more accessible west side near Shangri-La.

That feeling of having your own exclusive seat along this natural masterpiece is accentuated by the in-ground pool and hot tub that sit almost right on the edge of the shoreline. From within your own private recreational waters you can look out upon the waves washing toward you.

With 8,626 sq ft of home and a more than substantial 38K+ sq ft of this coastline property to call you own, there’s room to play or soak in the beauty. The indoors contain 4BRs and 4.5BAs with guest quarters and a fireplace for when the winds come in off the Pacific. Even if it does get a little cool for the outdoors, you can gaze out your windows right at a piece of the ocean that seems to be off the map for most, but center of the world for you. 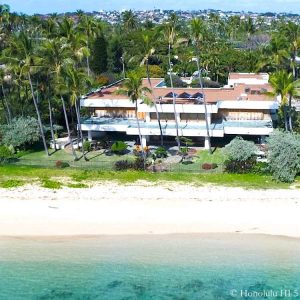 The new owner announced shortly after that the home was to be demolished, a new mansion to take its place. Shortly after closing a public auction was held and everything inside was put under the block.

What the new title holder basically bought for that tidy sum was 63K sq ft of oceanfront property on a street whose status is unassailable. Owning a lot on Kahala Avenue, especially one toward the Kahala Hotel side, is nothing short of having a stake in world class real estate. Time will tell just what will replace the former structure here, but no doubt it will be something awe-inspiring. 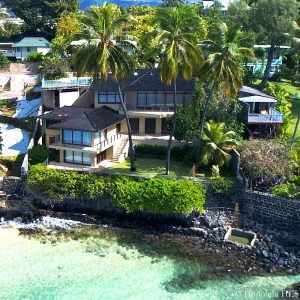 When Shangri-La is practically your next door neighbor, you know you’re living on some of the most prized Honolulu real estate there is, bar none. You live on the eastern border of the Diamond Head neighborhood, with Black Point beginning just beyond.

Right in front of you also begins the Pacific Ocean, lapping right up to your back lawn, providing a therapeutic soundtrack to the days and nights. In fact, 3 of the 4 bedrooms look right on the waves, lulling you to sleep at night and waking you wonderfully in the morning. With 180 degrees + of oceanfront views, much of the 3 story home enjoys those vistas.

The structure itself lives up to the surroundings, with almost 5K sq ft of elegant design so well executed that this house was featured in the pages of Architectural Digest. With natural and man-made masterpieces contained on this property, it’s surprising it didn’t go for more than it did. 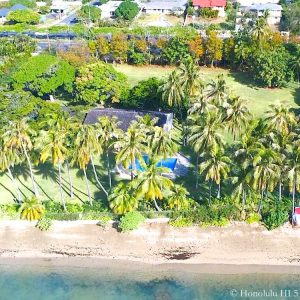 If you take a look at this duo through Google Maps, it’s clear that this was primarily a land purchase. The one story main house and a small beach cottage combine for 3,529 interior square footage, with a pool right outside the primary residence. A nice Honolulu home, but not the reason for a $13.5M sale.

What is the reason are the 2 lots that together bring 2.6 acres of land right along the Pacific in Aina Haina. To put it into more memorable terms, imagine owning over 120 yards lining the beach here. That’s a lot of ocean view.

Easily one of the biggest private lots along this coastline, it presents possibilities that boggle the mind. The new owners, an Asian development company, though, probably have some ideas already in place. The listing of these Honolulu properties was a unique event and the price went to a suitable level. In fact, it may have even gone a little low. 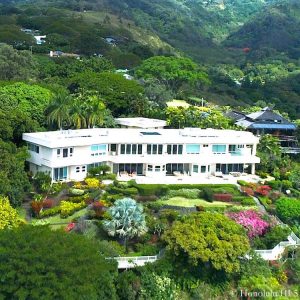 Coming up to this home makes you feel that it is the one making a dramatic entrance, not you. This sizable residence is accessed through a gated entrance, cars driving up to a perfect circle in front of the house, complete with fountain in the middle of that 360 degrees.

All around on the 1 acre+ grounds are tropical gardens, complete with walking paths within them, much of them enjoying the panoramic views of the ocean, Diamond Head and Honolulu you get from up in these hills.

5BRs are spread over 8,323 sq ft inside, with 6 full and 2 half bathrooms, incorporated into Master as well as Guest Suites for high-level hospitality. A wine room provides another vital side of entertaining as well. There’s even caretaker’s quarters, important for cultivated grounds like these.

From the windows, and the gardens, you and your guests can welcome the day watching the sunrise over Oahu, which just might be the most valuable feature of all. 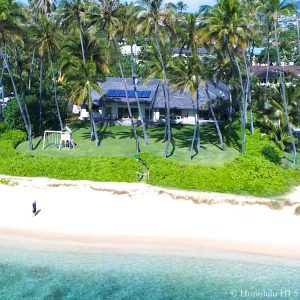 Thought built in 2002, this is a return to the Honolulu homes of a more genteel time. This bungalow style home was designed by famed architect John Hara, the man behind such prominent projects as the Maui Arts & Cultural Center and Phase 1 of UH West Oahu’s campus. It’s clear that he brought his deep Hawaii roots to this lot.

The one level of this tropical abode has 5,838 sq ft inside with 5BRs and 6.5BAs, that has room for both residents as well as a guest apartment with its own kitchen for visitors who are staying a little longer.

The smaller dimensions, for Kahala Ave, leave room for the pool contained within the L-shaped structure, but also a grand lawn that leads to the beach, providing space for large parties by the ocean scenery.

Though it may not reach the same grandeur of some of its neighbors, most would agree that this is how Islanders were meant to live – On stunning beachfront property that allows you to live within this environment, not dominate it.

Where Honolulu Real Estate Always Hits Its High Mark
From the list it’s not hard to see that the oceanfront Honolulu homes are the big winners. Though this is a skimming off of the top, there’s little reason to believe that a greater sample of this peak would be too much different. The call of the coastline is clearly a strong one.

The Ancient Hawaiians congregated around these same areas, drawn by the sea life that gave them sustenance without fail. Today most live on these same lands to partake of something harder to define, but no less filling to their spirit.