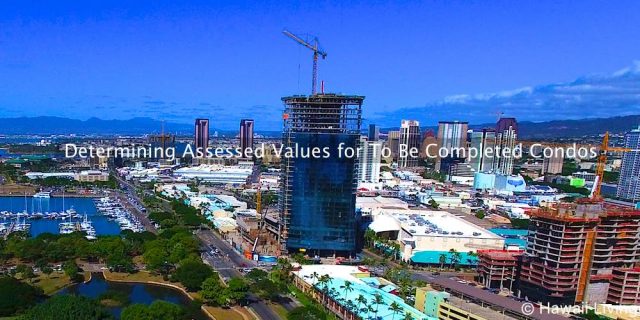 For new condos, under construction, the appraiser does not know the sales price agreed between the Developer and Buyer, since transfer of ownership has not occurred yet (the sale has not recorded / completed).

So how does the  appraiser determine an assessed value for a unit in a to be completed condo where there are no recorded sales?

Example 1
Waiea was completed November 2016 (several buyers took ownership November 2016) and the October 1, 2016 assessed value for Waiea units appeared to be a fraction of the expected market value. The appraisers have likely put substantial weight on the cost of building Waiea, in determining the assessed value for those units, which makes sense, since Waiea was not completed by October 1, 2016.

Example 2
Anaha was completed October 2017 (several Buyers took took ownership from mid October 2017) and the assessed value – for many units – appeared close to an expected market value. No Anaha units had recorded by October 1, 2017 and the cost of building Anaha surely wasn’t close to the market value, then what was the reason for such high assessed values?

I called the Real Property Assessment Division and spoke with an appraiser who had appraised a unit in Anaha and asked her on this matter. She told me Anaha was pretty much completed by October 1, 2017 and she therefore used 5 comparable sales in nearby and similar buildings (sold prior to June 30, 2017) to determine the assessed value. I asked her what are the determining factors to be considered pretty much completed and to my surprise there were no clear guidelines – subjectively determined by the appraiser. I was told if a project is about 95% complete then they would likely look at comparable sales, but if project is only 75% complete then they would probably focus more on cost of building the project in determining the assessed value.

Conclusion
If you purchase a new condo completed shortly after October 1st, don’t count on the October 1st assessed value, in that same year, to be artificially low – it may be, it may not be. It seems reasonably fair, although a bit disappointing the Real Property Assessment Division does not have more clear guidelines on this matter.

One Response to "Determining Assessed Value for New Condos in Honolulu"