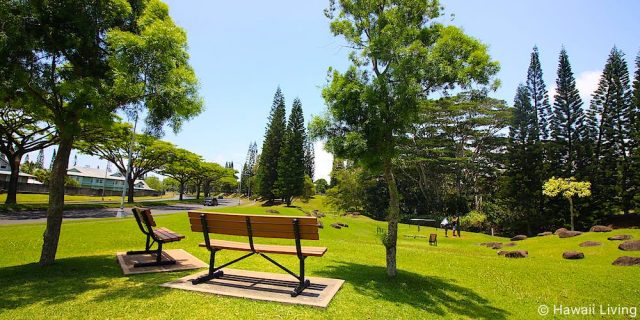 Life in Mililani gives you something that’s common to every community on Oahu – an experience that is all its own. There are different reasons for this uniqueness in our Island’s towns and neighborhoods – cultural background(s), a location smack in the middle, or even completely removed, from the tourist centers or just a ‘feel’ that’s not easily explained.

In Mililani’s case there’s a few factors, one major element being its very roots as a planned community. That is the reason for it’s more orderly and straightforward layout, especially in the central areas. Comparing a drive on its streets to one in the more organically created areas of urban Honolulu will tell you everything you need to know about the differences.

The spacious avenues, commonly lined by green spaces and trees, adds a certain quality to the time you spend almost daily on these byways. There’s a complete absence of the dense store-lined and concrete sprawl-hugged streets that have become common in so many parts of Oahu. Instead, there is room, beautiful, breathable room surrounding you on every side.

That is extremely important, since the geography places you right on the plateau in the center of the Island, right between the Koolau and Waianae mountain ranges. The higher altitude brings you cooler temperatures and fresher air that can make a significant difference to your day. However, while the elevation is higher, the skyline isn’t. 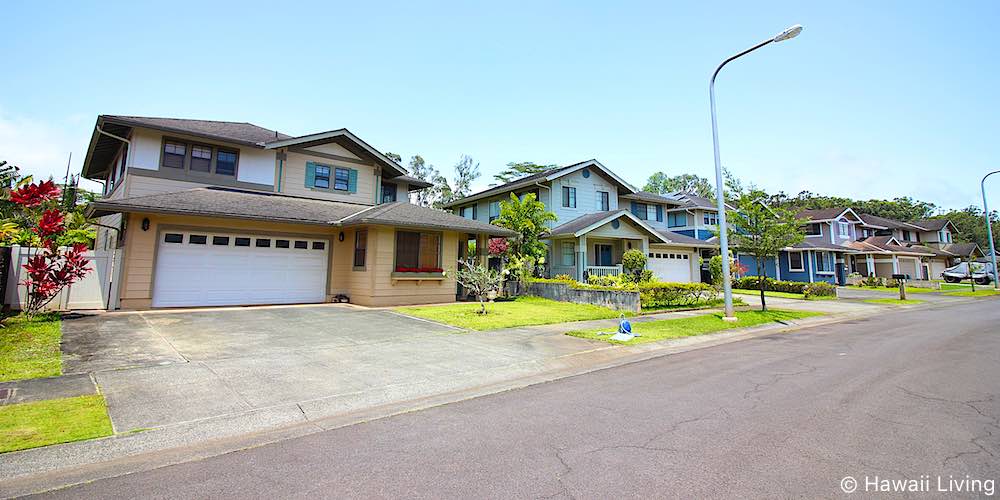 What first brought homebuyers here remains one of the prime attractions still. The lots across Mililani are filled with almost exclusively single family homes and townhome units that seldom go past 3 stories in height. The prospect of owning a house with a lawn and appreciable space between them and their neighbors was a prime selling point when the first Mililani homes were sold.

That attraction has only grown since as development has spread further and further. The few multi-story buildings stand out here starkly, marking how uncommon they are in these climes.

All of these points apply across the whole of Mililani, but there are 2 distinct halves to the town. The division is a clean one, made by H2’s path through the plateau. While there are common characteristics on both sides, what separates them, besides a highway? 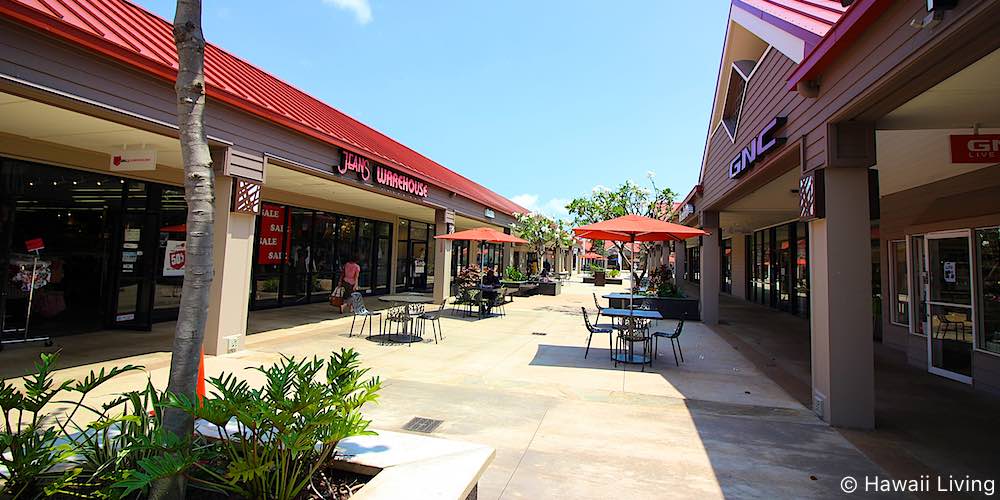 Mililani Town makes up the western side of H2, the older of the two communities, as well as the more developed. Any shopping you might do will be done on this side of the border, most of it almost definitely at Town Center, which has WalMart (with grocery section), Consolidated Theatres & Times Supermarket among its 90 stores, eateries and services. Any common needs, and more, can be found here, providing a local one-stop destination so leaving Mililani isn’t a requirement for almost everything on your shopping list.

There are also the smaller, but substantial Mililani Shopping Center, anchored by Foodland, and Mililani Marketplace, where you’ll find both Safeway and Long’s. Located in, respectively, the north and southwest areas of Mililani Town, they ensure even those not close to Town Center have a solid resource within easy reach. 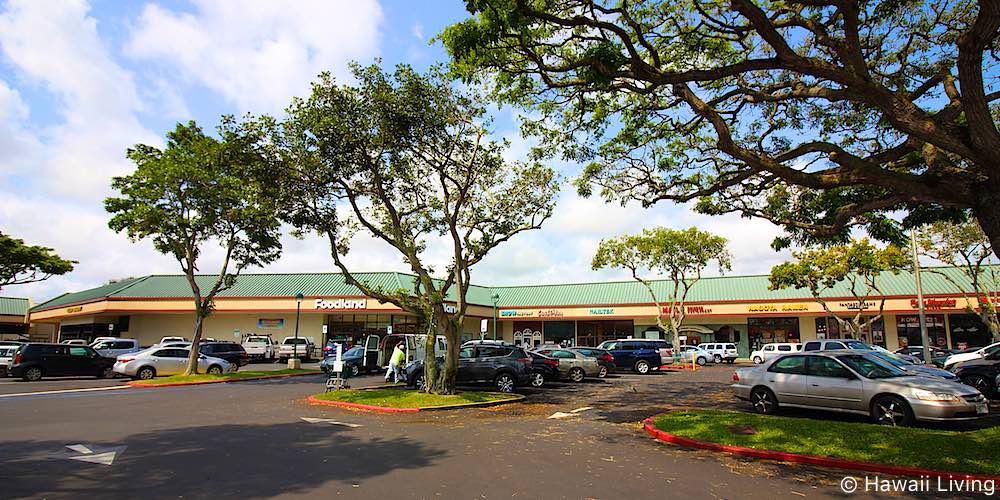 Food fans don’t need to go far either and there’s a wide variety to enjoy. Some of the most beloved restaurants cover cuisines as different as Thai (Rajanee Thai Cuisine), Italian (Assagio), Polynesian (Mililani Restaurant) and Korean (Mililani Bar-B-Q). There’s a lot to sample and savor right on your doorstep.

Although it is the more developed ½, it also has all of the large local parks. There’s at least 11 here, such as Mililani District Park, Maka’unalau Community Park and Mililani Neighborhood Park. If you’re involved in organized sports, you’ll probably play somewhere in Town. 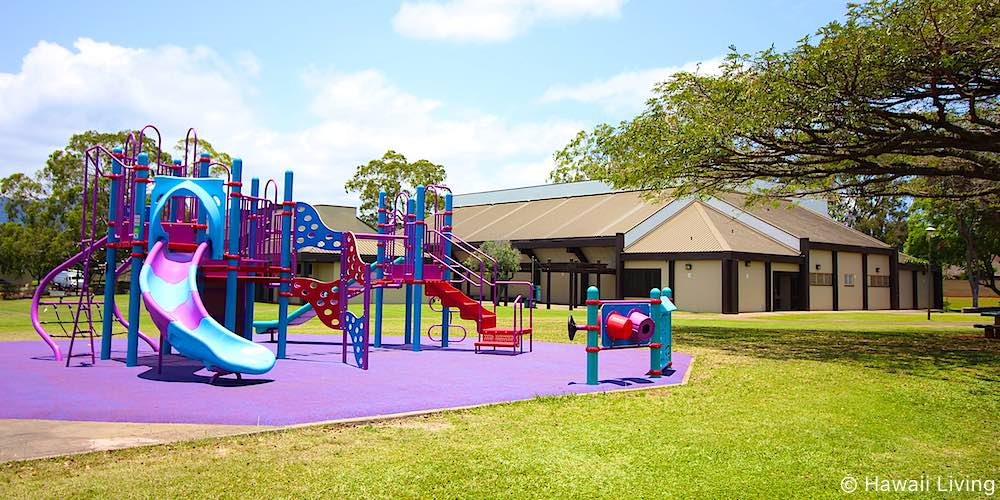 Of the 7 Mililani Recreation Centers, 4 are in Mililani Town, providing even more options, like swimming pools, activities for all ages and classes in improving your health, learning creative skills and self-improvement.

If you like those options because of your active keiki, you’ll also be assured by the 3 Elementary Schools present in Mililani Town – Kipapa, Mililani Uka and Mililani Waena. While students head to Mililani Mauka for Middle School, they return to Town afterward, where Mililani High School is located. The one private school in the entire city is here as well. Hanalani School is a Christian institution, with a solid 100% college acceptance record for its graduates.

Healthcare is another category where Town dominates. Access Medical Clinic, Physician Center and Straub Clinic are all here. A Kaiser Medical Center is just to the south in Waipio, too. Outside of extreme emergencies, you can get most of your medical needs take care of at one of these facilities, keeping you from having to go too far from home.

For more substantial issues, Central Oahu is covered by Wahiawa General Hospital, which is 4 miles north, keeping the ride there to around 10 minutes.

MILILANI MAUKA & LAUNANI VALLEY – THE QUIETER SIDE OF LIFE
The other ½, made up of Mililani Mauka and the Launani Valley residences, take up the eastern side of the highway, but could be more accurately said to be to the north-east of Mililani Town, higher up the Island. They’re also against the mountain hillsides, or even in the midst of them in the case of Launani Valley, making for a cozier feeling to both.

The general perception is that the Mauka/Valley section is not only the smaller of the two in population, but smaller by a large margin. While it is below Town’s total of 28K residents, it isn’t too far behind, counting 21K people of its own.

The reasoning is understandable from a look at a map of the area, showing the geographic size difference, the added shopping centers and undeveloped areas, especially in the corners, expanding the footprint in their favor.

Mauka holds two elementary schools, Mililani Ike and Mililani Mauka, which are both highly rated, as well as Mililani Middle School, the only 6th – 8th grade public school in all of Mililani.

THE MILILANI BORDERLINE
Being on this half of the Mililani whole doesn’t present a jarring change from the western half. Instead it’s more of a sedating change, descending the calm scale from an already low position on Town side. This comes from a couple of key factors.

One is the H2 highway that is a solid divider, placing the mauka side communities out of sight and out of mind. Anyone can drive over, of course, but there’s a distance both literal and perceived that keeps them separate and rarely crossed by outsiders without a specific reason to do so. That highway also guarantees that the two halves will never join, a guaranteed buffer for life.

The other factor is that Mililani Mauka and Launani Valley are classic bedroom communities. The one exception to this is the Gateway at Mililani Mauka, a small shopping center with essentials like Long’s, some medical offices and Starbucks. Important resources for these more eastern communities, but nothing that would attract anyone over from Mililani Town. 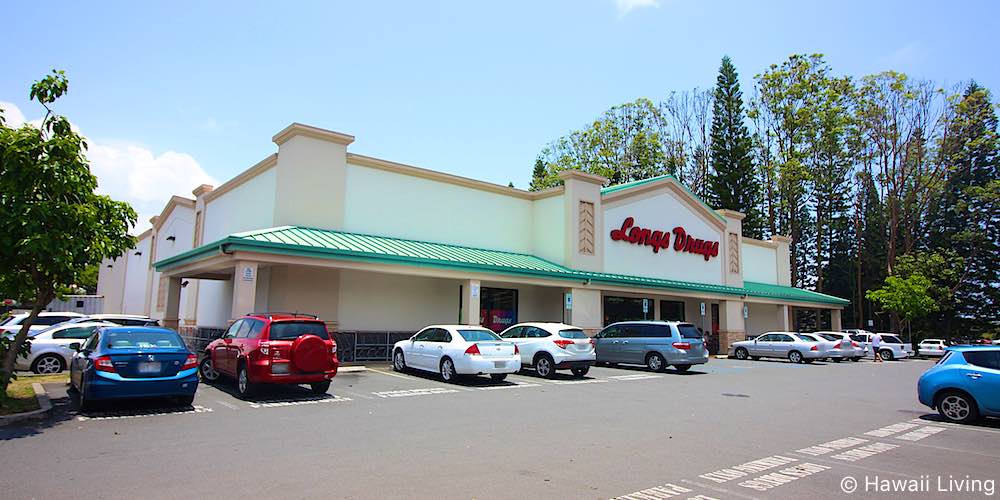 Longs in The Gateway at Mililani Mauka

You won’t find fine dining in the Gateway either, but that’s not where true local tastes run anyways. What you do have, even in this small selection, are places that residents rave about and keep returning to – Rise & Shine Cafe (breakfast/brunch fare), Poke Stop (dishes featuring local reef fish) and Gyu-Kaku Japanese BBQ all get top ratings from foodies.

These small tasty, but small sized, restaurants fit right in with the low-profile over here. This environment pays off in both lower noise and traffic levels, well below what you’ll experience on the far side of H2. Off to the side here, neither community is on the way to anywhere either.

If this isn’t your neighborhood, you’re either visiting someone who does live here or you’re lost. There’s few other reasons to enter these streets otherwise. It’s as close as you’ll get to a gated community without the actual gate.

Your leisure time has further outlets for fun and learning at the 3 recreation centers that are found in Mililani Mauka. Enjoy a swim, take classes in painting or ukulele or learn how to improve your financial picture. That, and numerous other, choices are available for a very reasonable fee that gives you access to all 7 centers across Mililani.

For those who truly seek peace and quiet, Launani Valley is the clear winner over Mililani Mauka. The townhomes here sit in beautiful green surroundings that hug them on both sides, ending only when the road dead ends so you feel miles away from the developed world. Yet you’re just a very short drive from the freeway or the stores and eateries of Mililani Town Center.

BENEFITS THAT COVER EVERY MILILANI HOME
Wherever you are in Mililani, the paths both north and south are not only right at hand, but provide fast routes both ways, though all bets are off during rush hour. The commuting segment you must do on H1, between Pearl City and Honolulu, puts you in the same lanes as the large numbers of fellow Islanders heading to/from Aiea, Pearl City, Kapolei, Ewa Beach and places even further Leeward. 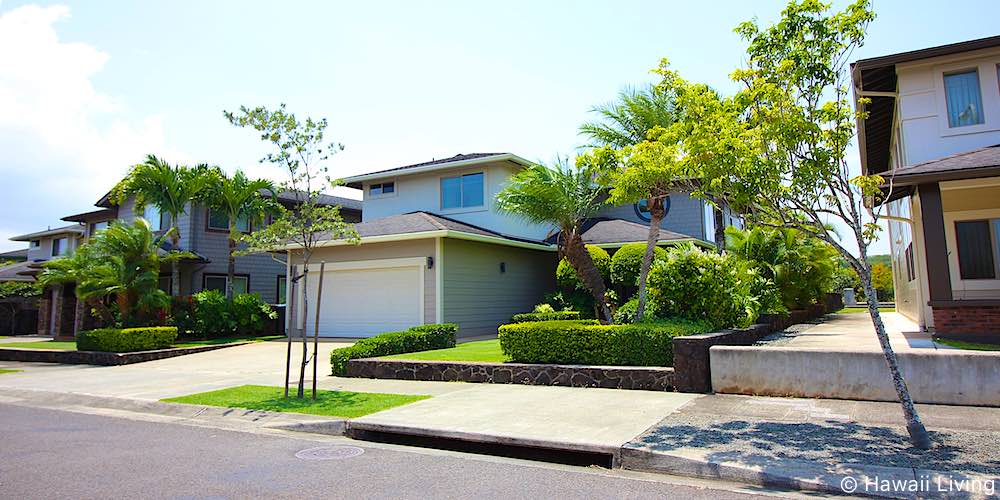 There’s often little that’s ‘rushed’ about your trip either way at these times. Still, you can take comfort each weekday evening as you pull onto the faster moving H2, while your westbound neighbors must continue on in the infamous H1 traffic.

Outside those times, which are an issue for almost all Islanders, much of Oahu’s most attractive draws are within ½ hour or so. Haleiwa, on the North Shore, is 25 minutes by car, Kapolei’s top level shopping takes even less (23 minutes) and Ala Moana/Waikiki is just over our estimate at 33 minutes or so.

Kailua & Windward Side take a little longer, at 40 minutes, but you can be at Honolulu Airport in under 20, which beats almost everyone who lives in East Honolulu. You may not be the closest to individual destinations, but your Central Oahu location puts you in easy reach of almost everywhere, balancing things in your favor.

Up here in Central Oahu, things are still local-dominated, out of the reach of the tourism business that has encroached on so many neighborhoods along the coasts. You will find few, if any, Air BnB listings or vacation rentals, so your neighbors are year-round, permanent and often longtime, even extending to successive generations. A Mililani home is a long-term investment, because owners don’t ever want to leave. That’s the kind of place this is, on both sides of that highway.