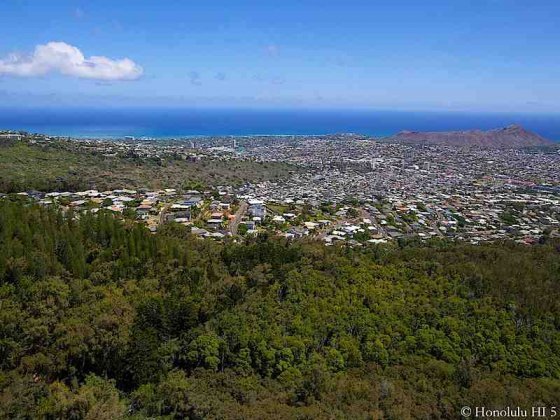 Note: This page displays homes for sale in the Diamond Head region, which is 1 of 3 regions in Honolulu. If you want to search all Honolulu, then visit our Honolulu homes for sale page.

When you hear the words 'Diamond Head homes', it's natural to immediately think of large and very exclusive oceanfront mansions sitting under the the iconic volcanic cone. Those are the houses that get the profiles in upscale magazines and tv shows that focus on the Other Half. The Diamond Head region, though, takes in a lot more and there's a lot of variety that spans the market.

In Honolulu real estate, the Diamond Head district takes in a few neighborhoods, stretching from its western borders of Kapahulu and Kaimuki, out to its eastern end that stops at Kuliouou and Paigo Lagoon. You'd be in good company if you didn't realize that the smaller homes sitting behind Diamond Head are just as much a part of this same overall district as Doris Duke's Shangri-La.

It all starts with those homes in the Kapahulu & Kaimuki districts, many of which are of the classic, wooden Plantation Style, Dickey roof and all. Intermingled you will find newer and, in some cases, architecturally very different houses. This wide variety of styles is because these are long established neighborhoods, rather than the result of planning or a developer's vision. It's a wonderful patchwork that sometimes find the homes almost cheek-to-cheek in many areas.

Above these, literally, are neighborhoods such as Wilhelmina Rise and St. Louis Heights where your outlook can be magnificent, taking in a huge sweep of Honolulu and even the ocean. The words 'Rise' and 'Heights' are very appropriate for the way these residences stretch far up the hills. A large percentage of them are still here from the original build up during the 1950's and 60's, along with some more recent additions. These are great places to settle for those who don't mind, or even prefer, a high perch to live on and take it all in.

Heading immediately east from Kaimuki takes you right into Kahala, a name immediately recognized, not only in the Islands but around the world. It's become almost a cliché to call it the Beverly Hills of Honolulu, but it's also accurate. From the design and look alone, many of the houses here probably do have counterparts back in California. The apex of the market are the homes found on Kahala Avenue, right on some of the most desirable coastline in Hawaii. They will be hard to see, though, behind the large gates and walls that front most of the properties.

Gates and walls continue to be a prevalent feature on the makai side of Kalanianaole Hwy as you continue east through Wailupe, Aina Haina Beach and oceanfront Niu Beach. Just as Kaimuki had its 2 neighborhoods looking over it, Wailupe has Waiale Iki and Hawaii Loa Ridge. Their high positioned homes are also higher in price and desirability, a product of the development boom in the 1980's that saw larger houses built in coveted climes like these. After seeing the views from here of the Pacific and the Honolulu city scape, you'll immediately understand why.

Back on street level, you'll come next to Aina Haina, famous for its low-rise ranch style homes as is Niu Valley, its neighbor. The latter is especially beautiful with the smaller vertical footprint of the homes giving you a Big Sky feeling with the backdrop of the awesome Koolaus. These are also products of the post-World War II construction surge and many families are the same ones who bought originally, as are the houses themselves, of course.

Overall, this is probably the highest cost real estate district in Hawaii. You can still find reasonable prices, for the Islands, in some Diamond Head region homes for sale, but this is always an in-demand area. Plenty of shopping, generally good schools and beautiful scenery, though it often leans to being very urban. Factor in places like the Gold Coast, Kahala and Black Point within its borders and that takes the price tags up into the stratosphere. It's a case of a lot of demand and not enough supply, but how many who live here have ever regretted the purchase? Let's face it. Not very many.