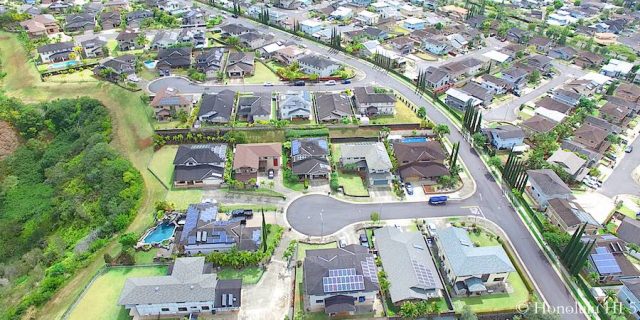 Central Oahu’s place in the history of Pre-Contact Hawaii, showed that its literal role as the center of Oahu often paralleled its significance in other ways.

The lands of today’s Mililani Mauka was a part of this, though what is recorded doesn’t tell us much about specific areas except for truly noteworthy instances. The fertility of these lands, combined with the cooler temperatures made them exceedingly attractive. This resulted in local Chiefs warring at times to control it.

Another, probably even more important motivator to these conflicts was the sacredness of certain areas, especially the Birthing Stones, where Ali’i women delivered their children. Those sites were believed to possess great mana, or power, which would belong to the Chief who ruled them.

The armies of Oahu also trained for war up here, preparing for the invasions from forces from the other Islands that would periodically land their warships on the shores. Those exercise on these lands would prove to be extremely valuable on at least one occasion.

Mililani was ground zero for one of the most momentous battles in Pre-Kamehameha Hawaii. In 1410 the Chiefs of Maui and the Big Island attacked Oahu, the armies finally fighting the decisive battle in Kipapa Gulch, which runs just below Mililani Town and Mililani Mauka.

Oahu’s forces, under their leader Mailikukahi, ultimately came up victorious but only after a slaughtering of both sides that left the gulch filled with bodies. Ever since, locals have reported numerous experiences that suggest the spirits of these warriors still haunt the place.

The Father of Mililani
The modern turning point for not just Mililani Mauka’s lands, but the entire Central Oahu area, came in the form of a young Big Island Chief’s son named John Papa I’i. Born in 1800, he became a personal attendant to the boyhood Kamehameha II, growing up in the Mililani area. These lands were dear to his heart as he spent many hours spent happily roaming them as a boy.

His services to the King and the Islands were repaid in 1850 by King Kamehameha III, who granted to him the lands of the entire ahupa’a, including his beloved childhood home. It is said that it was John Papa I’i who first called the area above the Kipapa Gulch ‘Mililani’, over a century before the name became official.

After his death in 1870 the lands were put in trust and sold, with what would become Mililani Mauka, as well as much of the remaining center of the Island, being bought by Castle & Cooke. These untouched lands were soon the site of massive, flourishing plantations, producing sugar and pineapple crops that put Hawaii on the economic map.

While the plantations did build for the workers houses, general stores and other essentials, Mililani Mauka was purely used as farmland during the entire lifetime of this concern. That meant almost a century of harvests coming from this soil, only ending when the financial winds began to change. 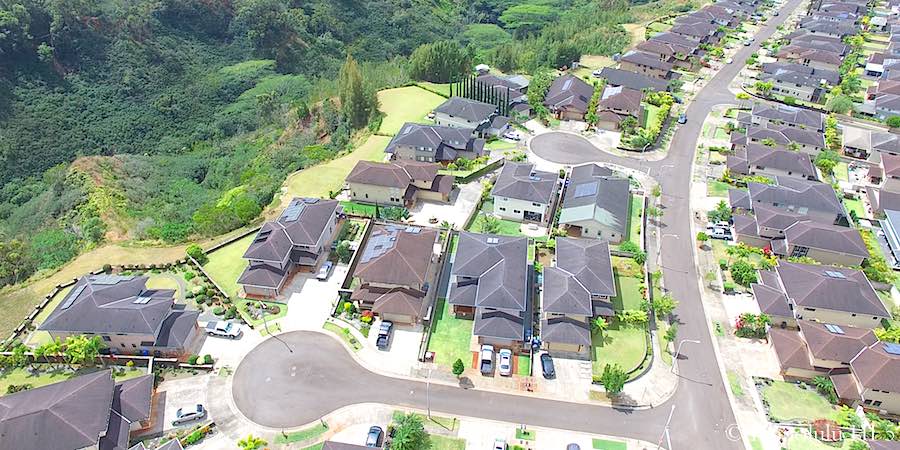 You could say that Castle & Cooke was a pioneer in the Hawaii’s shift from farming to real estate. Though the first Mililani Town homes were occupied in 1968, the plans for converting the whole district into a residential area started a decade before in 1958.

The acceleration of the success of the entire endeavor came with the opening of H2 in 1976, which cut the commuting time to Honolulu in half, making these homes even more attractive to buyers. The highway also created a defining line that separated Mililani Town from Mililani Mauka. This ensured Mililani Mauka would be a part of the whole and yet a distinct community of its own.

The vision for Mililani Mauka real estate was a higher end residence on average than Town, with a greater percentage of townhomes in Mauka. It would also be more of a bedroom community, with only a small shopping center here, anchored by a Long’s. That did require a trip across H2 for most things, but it cut down on outside traffic and noise. That was a tradeoff that their target market was happy to make.

The construction would be completed in 2007, totaling approximately 5,000 homes across it. It was an immediate success, selling its homes quickly. That includes townhome communities like Kumelewai Court, one of the first residences finished, that all have 2 stories and 2 parking spaces. They set the family-friendly tone of this neighborhood by offering only 2 or 3BR floor plans. 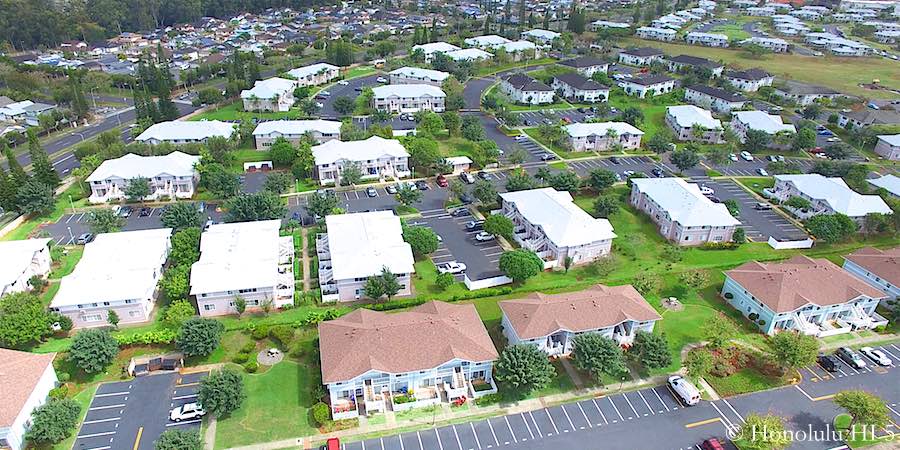 Another notable is Havens of Ii Vista, one of the very few gated communities in Mililani Mauka that added an extra layer of privacy and safety. Though the layouts are not the largest, the ground floor units make it up outside with 300 sq ft of fenced backyard.

Single family homes have an especially high regard in Oahu’s real estate market. Buyers quickly learn the name of projects like Island Classics, where the homes are large, like the 3BRs with 1481 to 2194 sq ft on up to 5BRs spread over 2282 sq ft inside it.

Lots can be 3797 sq ft to as much as 5561 sq ft. There’s a nice fenced-in yard and a driveway included in the bargain, too. That driveway pulls right into a 2 car garage with plenty of space to open your doors between autos.

Other names in this category, such as Destiny and American Classics are equally blessed with expansive floor plans and desirable features such as large yards and views of the mountains and, sometimes, the ocean that justify their fast-selling reputations.

Single family homes have recently gone for over $1M on the top end, proving just how appealing Mililani Mauka is to home seekers.

The Most Important Fact About Mililani Mauka Real Estate
What Oahu home buyers should know most about Mililani Mauka is this – if it stood alone, rather than being grouped with Mililani Town, it would the #1 Hawaii Town for Home Value Appreciation over the last 10 years. Not just on Oahu, but across all of Hawaii.

That tells you a lot about the value, the attractiveness and the solidity of the homes in this community. Fortunately, unlike the Ancient Hawaiian Chiefs, the only fighting you’ll have to do to live here is with your checkbook.