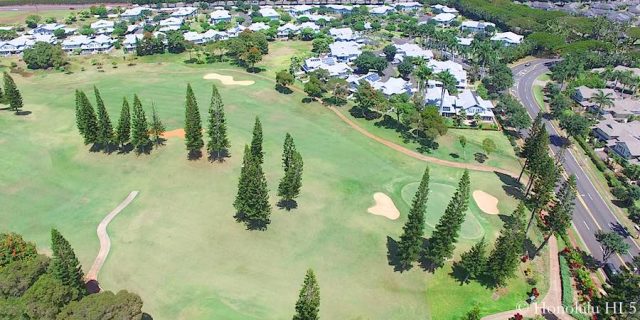 It is difficult to pinpoint much of the early development of the neighborhood we know as Waikele today. That’s because it was originally the name of the entire ahupua’a that stretched from the Koolaua Mountains down to the sea. When Waikele is spoken of in the historic sources, it applies to a vast area, of which the current name-bearer was just a small part.

Today it falls under the city of Waipahu, which had once fallen under it in the Pre-Contact times. Still, we know some of the Old History that the lands of this neighborhood saw before the modern landscape was raised.

The word Waikele in Hawaiian translates as ‘Muddy Water’, a recognition of the Waikele Stream, whose brown depths ran throughout the district. Hawaiian farmers were drawn here by that resource, using its waters in their cultivation of taro, an essential food staple. They would not be the last.

The proximity of the Ancient Oahu capital in Waipahu below lent these farmlands some extra importance due to their proximity to the Island’s ruling center, as well as the fact that its taro fed the Ali’i. The real estate would lose that luster, however, after Kamehameha united the Islands, including Oahu, and shifted the seat of power to Honolulu for good.

For now, this district was diminished in importance and significance. Still, it was not abandoned by any means. Agriculture would continue here on a small scale, but a real settlement would take hold with the introduction of horses brought by European ships, allowing a fishing village to take root.

The fishermen became Waikele’s first commuters, traveling on horseback or by cart to Pearl Harbor’s shores to catch the plentiful fish in its waters. This bridged the gap after taro, but it did not last long. This was due to the soil, streams and springs on these lands being recognized as the perfect place for feeding the new economic engine of Hawaii, Sugar.

The Oahu Sugar Company came to life in 1897, specifically to farm this area of the Island. Its property covered 10,000 acres, comprising today’s Waipahu, Waipio and Waikele, that would produce huge harvests and profits for almost 100 years. If you lived in this part of Oahu, with few exceptions, it could be assumed that you worked for the company.

The corporation built their own neighborhoods of homes, one given to each employee at no charge. They even provided the stores that their workers bought groceries and essentials from every day. This system was the start of much of the Waipahu we know now. Waikele, though. would remain strictly farm, covered in cane for almost the entire 20th Century.

Plantation Becomes Community
While Honolulu and much of Oahu modernized, with high-rises, freeways and shopping centers springing up in these years, Waikele’s lands remained in the same agricultural state. In 1995, though, economics finally put an end to the plantations, the cost of raising sugar in Hawaii becoming too high. This farmland wouldn’t be idle long.

Diminishing returns of recent years had prompted plans for this eventuality. So blueprints were already in place before the final harvest to change this area into something that was now in even greater demand than sugar. Real estate.

The sugar company’s backer, Amfac, immediately turned to the creation of a neighborhood on these heights above Waipahu that provided views of Pearl Harbor. Beginning the building with homes along Lumiau St, the whole project would take about a decade to complete.

These were not going to be the high-rise condos or paved over spaces that had become the norm to the east. This would be something different. 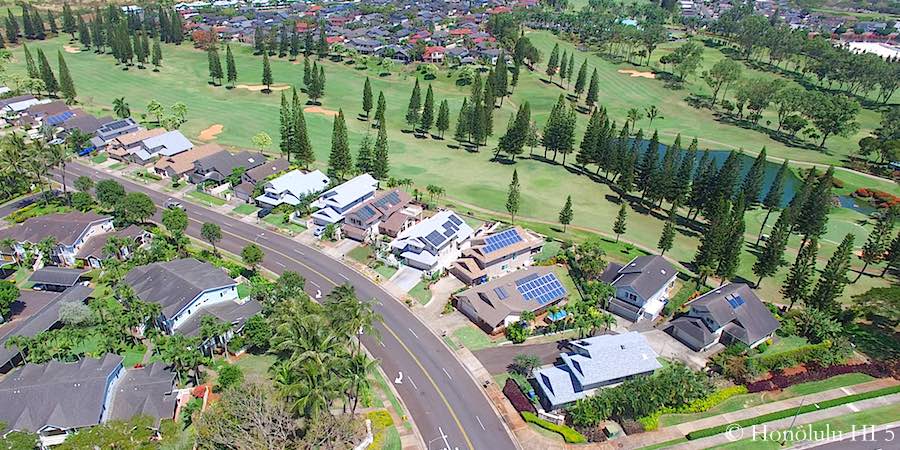 Once finished, the new Waikele would consist of 2937 homes contained within 12 townhome communities and 9 single family home subdivisions. With green spaces everywhere you look, the banyan trees lining the highway here and its utilities buried safely out of sight, it is a lush, open counterpoint to its makai neighbors.

All of this is centered around the Waikele Country Club, with greens and fairways that golfers love and many residents enjoy even more for the backdrop they give to their homes around the course.

The developers would add one more surprising, but ultimately very popular, element with the Outlet Mall that attracts busloads of tourists along with crowds of locals looking for a good bargain.

The Homes Of Waikele 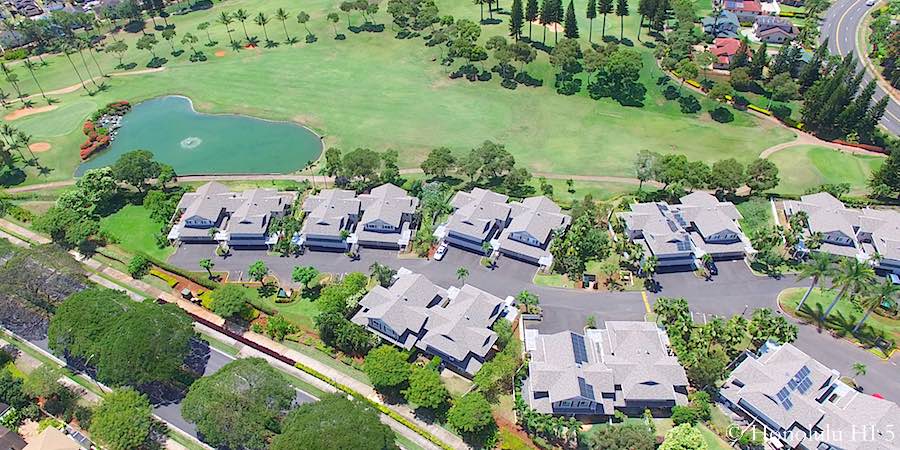 Most Waikele homes are townhomes, their low-rise, Plantation-style designs intended to fit the open, local-rooted environment of the neighborhood. One standout is the Fairway Village at Waikele, which sits right on the golf course, providing both green views and quiet all around it. The units have larger spaces, too, making them even more attractive.

The Village On The Green is another, located beside the 2nd Green and its companion fairway as well as open parkland above its homes to increase the views and the openness of your environment. The homes here are distinguished by providing layouts to fit every need, from single story to split-level and full two story floor plans as well.

Though best known for these multi-unit residences, Waikele was seeded with excellent single family homes that are consistently in-demand. The Tropics is one of the best examples, a collection of two story homes that come in a staggering 20 different layouts with 2 to 4 bedrooms.

Residents live in a community encircled by Patsy Mink Park, open fairways of the golf course and the fields used by Waikele Elementary School for recreation. Beautiful to see in the day and peaceful every night.

The perks of this Master-Planned neighborhood are no accident. They are the result of a smart and well-executed vision that took advantage of the golden opportunity of these lands once covered in sugar cane.

Waikele lands provided over the centuries a key element to our Island’s society. First, with taro, a vitally important part of Hawaiian life. Then sugar, the engine of the economy for decades. It is only appropriate that they now hold something equally important to today’s Oahu, homes that remember our local values, a place centered around the eternal natural beauty of our Island.