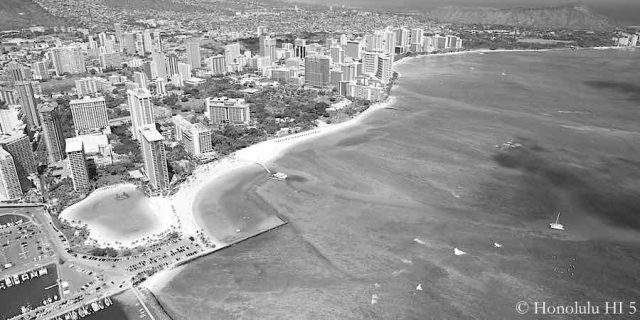 Before the term Real Estate ever earned its modern meaning, Waikiki’s lands were prized possessions. That was abundantly clear by the fact that the oceanfront areas were reserved for the Alii. Here, they retreated for recreation and relaxation on the beaches and in the cool waters, a forerunner of the exclusive resort property of today.

Away from the shoreline, this was an agricultural area for the Native Hawaiians, where taro and other crops were grown for generations.

During this time, up until the Great Mahele of 1848, all land was owned by the Alii, so Waikiki, and everywhere else, was under their firm control. It was only after the Mahele that individual ownership, and therefore real estate, came into being, not just in this part of Oahu, but in all of Hawaii.

What many don’t realize is the first hotel in Waikiki pre-dates this huge change, opening in 1837. Little is known about it, except that it was run by a man named John Mitchener and it had a bowling alley. It’s lifespan was short, just a few years, and surely was the result of special permission from the Alii. That was the end of hotels for a while.

Still, these early decades after the Mahele saw outsiders begin buying property and building stately homes on or near the beach. That included prominent families like the Campbells, Castles and Cleghorns. Archibald Cleghorn, King Kalakaua’s brother-in-law, was also one of the founders of Kapiolani Park in 1877, an addition that brought pleasure-seekers here, especially to the horse racing track.

A Pivotal Change for Waikiki: Accessibility
What accelerated the community’s expansion most, as well as the growth of the area as a resort, was something that is always a key to real estate development. In the 1860’s the government finally expanded the path from Honolulu to here into a full road, making travel back and forth much easier.

That improvement brought more homebuyers, the most significant event being the release of several lots next to Kapiolani Park in 1883 that sold both quickly and for a good price, setting the precedent for Waikiki real estate even then.

The tourist trade wasn’t too far behind as the 2nd hotel in this district finally opened its doors in 1888, soon joined by many more in the coming years as greater and greater numbers of travelers made their way here.

The creation of the entire visitor and residential districts span that we know today was still far off, however. This was due to the fact that much of the lands away from the shore were still either swampland or being farmed.

By the early 1900’s Native Hawaiians had been replaced by Chinese farmers growing rice, a result of the plantation system. Once the imported Chinese workers finished their obligations at the sugar concerns, many struck out on their own in places like Waikiki. The wetlands here were just the right conditions for their crops. It wouldn’t be for long, though. 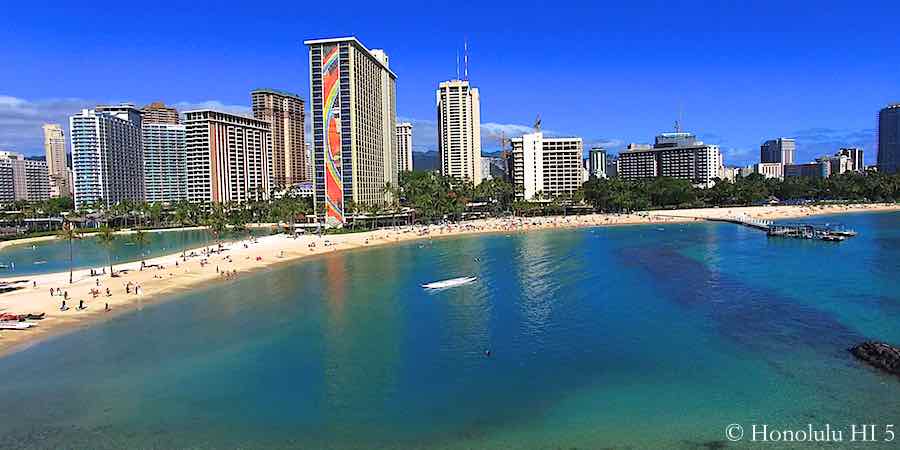 The Creation of New Real Estate & A Tourism Mecca
Another key moment would change all of that forever. Due to the swamps that covered a large part of Waikiki, mosquitoes were a constant problem, creating both a health issue and one of comfort. That limited the tourist trade, which was becoming more important to the Hawaiian economy. What was the solution?

The government came up with one in the form of the Ala Wai Canal. Carving that out drained the swamps, getting rid of the mosquito problem. It also created solid lands that could be built upon and, yes, developed. With one stroke, agriculture was ended here. Tourism and real estate took over fully, conditions that remain today.

The land claimed, and reclaimed, by the canal’s completion in 1928 was divided up into lots of 5000 sq ft and sold. The Waikiki layout we now know was in place and the landscape began to shift even more dramatically with the arrival of not only more homes, but also more hotels, restaurants and other tourist-centric businesses to serve growing arrival numbers. It’s amazing what getting rid of mosquitoes can do.

This was not development in the current sense. Instead it was individual lot owners building on their property that first brought this district fully to life. It also made the area even more attractive, adding a certain price rise from other parts of Oahu, though nothing in the realm of what we have now due to the a much smaller population and the isolation of a place reached only by ship.

It is also true that this new natural border of the canal created an enforced separation from the neighboring areas, putting a strict definition, and a certain exclusivity, that could only raise property values as the popularity of the neighborhood increased in the time ahead.

Waikiki was a much more built-up part of Oahu from this time onward, its only competition being Downtown Honolulu, which would fade later in certain respects. Still, for now it would remain a low-rise neighborhood for another 30 years.

WW II and Statehood – Two Turning Points That Created Modern Waikiki
The third key moment was a combination of the Post-War years and the sea change of Statehood in 1959. The many servicemen and women who came through Hawaii during the war created a tremendous word-of-mouth that in the time afterward prompted so many to come for vacation on the newly created Matson ocean liners and the expanding airlines services.

Some came to live the Island life, now much easier to attain in this more connected world. The word on Hawaii, and specifically Waikiki, was out.

One result was the first residential coop high-rise coming up on these streets in 1955, the 12-story Rosalei at 445 Kaiolu St, which is still there today.

Those conditions only accelerated with Statehood in 1959. This caused tourism to hit an entirely new plateau in visitor numbers, as well as bringing a deluge of money from outside the State. Much of it was aimed at investing in and buying up real estate in the crown jewel of Hawaii’s tourism industry, Waikiki.

Though cooperatives had been built in the years before, the Hawaii State Legislature passed the Horizontal Property Regimes Act during the 1961 session, the very first state condominium law in the US.

Appropriately, the initial product of this law here was a significant one. The first Waikiki condo, the Ilikai Apartments, opened with huge fanfare in 1965, the building’s 26 stories dominating the skyline easily. It ushered in the era of large scale high-rises that would soon spring up from the lands around it.

Build Up and Bubble
The very best evidence of the huge upsurge in development in Waikiki during the 1960’s and 70’s is the fact that the vast majority of condominiums on its streets today date from that time. During those 2 decades the low-rise, single family home landscape between Kuhio Avenue and the Ala Wai Canal was altered completely to the forest of high-rises you see now.

It was an unprecedented build-up whose only parallel might be the new Kakaako district. That kind of real estate demand, for both residential and tourist markets, proved very attractive. This time, it brought investors from Japan with large amounts of cash from their roaring economy of the 1980’s and early 90’s. They not only bought up as much as possible, they also raised new structures themselves.

This frenzy was best typified by the building of the massive Waikiki Landmark, which displayed the ‘spare no expense’ feeling of the time, both inside and out. Unfortunately, as it neared completion, the Japan bubble burst and this huge skyscraper sat empty for some years, waiting for someone with the money and the will to finish it.

That collapse slowed the property world of Waikiki for some time, even lowering values in many cases. Something that had never happened before. It didn’t, and couldn’t, last, though.

The last decade has seen a resurgence in development, such as the Trump building. Most recently, The Ritz-Carlton Residences have opened their doors on Kuhio Ave, adding a new level of luxury that seems to be gaining ground in this neighborhood. Soon, it will be joined by a planned condominium on the site of King’s Village, as well as coming redevelopments of the Surfrider and Princess Kaiulani Hotel.

The new International Market Place has now joined the rest of Kalakaua Avenue in featuring primarily luxury brand stores and higher-end retailers, ending the last hold out for small businesses. The Golden Mile of this street is compared often to Rodeo Drive, with its designer shops and fashion-conscious offerings taking up most of the frontage along with the hotels. It is a relatively recent change, but one that has taken root.

In this current era, an upscaling is happening, both in the homes and the businesses of Waikiki that points to a more exclusive atmosphere than before. It’s inevitable when real estate is this valuable, this attractive and this limited. There’s no question that this is the direction it is, and will be, headed from now on.

Tracing the evolution of real estate from the days of the Kingdom until now, it was clear that these properties were marked for distinction from the beginning. The Alii couldn’t help but see the incomparable natural beauty these oceanside lands had been so abundantly blessed with – and so they reserved them for their own enjoyment. Today there is no law or custom preventing you from having a part of this Paradise. Just a high price tag.