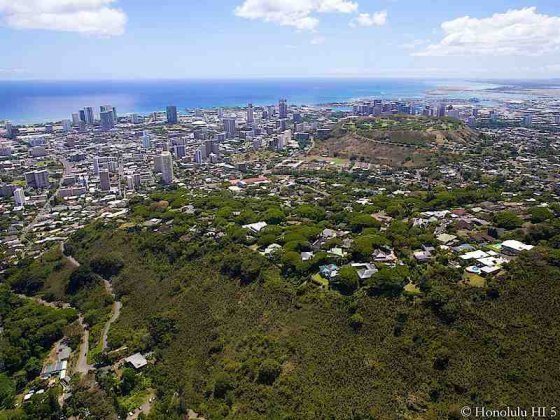 Being the most urbanized part of Honolulu, that can limit your choices somewhat. Some Metro Honolulu neighborhoods, like Ala Moana, Waikiki and Kakaako are today almost exclusively condos. However, there are some great options for single-family homes in the Metro region.

A perfect example are the homes in the Nuuanu neighborhoods, which stretch up the hills above the central business district with wonderful vistas for many down on the city and even the Pacific.

Nuuanu gets a lot of rainfall so it is covered in many areas with large trees whose canopies spread widely to give shade and cool relief that can be very welcome. That can block off the long views in some cases, however, giving a secluded, protected feel that some prefer.

Houses in Nuuanu span every era of the last 100 years, but the greatest attractions are the large, old houses that were built for wealthy Honolulu businessmen in the early 20th Century. These wooden structures have exquisite architectural touches that are a special part of local history. It's not unusual for passing cars to slow down for a better look.

Pacific Heights, across the Pali Hwy to the east, is equally historic and even more exclusive. The neighborhood was developed in the 1920's after an earlier attempt or two didn't pan out. It did finally happen and in a big way as a number of the most notable families in Honolulu flocked to these lots and built beautiful houses that looked down at the downtown area and the Pacific that stretched out before them.

The vintage homes remain there today, famous for being well-maintained and, in some cases, remodeled, but without losing any of their appeal. Some of them are almost 100 years old now, but all command high prices due to the the sweeping views and the early 20th Century architecture and workmanship. The streets they gaze out on have changed dramatically since these Pacific Heights houses were built, yet they have remained perfectly timeless.

If Pacific Heights isn't right for you, but you like the idea of living at a higher elevation, heading a little in the direction of Diamond Head to Tantalus is a good bet. The first real homes on Tantalus were summer retreats for the wealthy families who wanted to escape the heat. Now you can live year-round in cooler temperatures thanks to advances in building technology.

Most homes are set closely together, some on steep slopes but the panorama from your window can be spectacular. Limo companies sell trips up to Tantalus at night for tourists to see the city lights, so incredible are the views from here.

This is another place you can find an old Hawaii home from the early to mid 20th Century, preserved and cared for by their owners. This is a community where neighbors have known each other for years, some for generations, and the houses reflect that longevity in the very best way.

Makiki sits below Tantalus with Manoa on its east side. The neighborhood has a proud history that saw a mix of plantation workers who struck out to run their own businesses as well as many of the established upper class whose children attended nearby Punahou School. That mixture is still present today, at least in the varied sizes and styles of houses contained in this community.

One area that is distinctly upscale is Makiki Heights, where more than a few of the upper classes of the early and mid 20th Century put up unique residences that looked out at the land and the waves from very comfortable rooms. The properties often feature large lanais and open areas so that the outdoors, especially the views, can be enjoyed fully.

Manoa, which crosses over seamlessly at some points with Makiki, is more than just a valley, it's a tropical rainforest. Homeowners love the daily rain because it keeps the greenery flourishing everywhere you look. Houses built in the 1930's and 40's are a common sight back here, preserving the old kamaaina atmosphere that never fails to charm.

Manoa properties also tend to have a larger footprint, with more space between them, than other parts of Oahu. That, combined with the rain, produces exceptionally green lawns. The temperatures are also cooler in the valley, giving commuters a great incentive for getting home after a day in the hotter city. Coming back into this retreat is somehow always a happy surprise, so removed is it from the world just a few minutes away.

Though the most developed part of the Island, you still have these wonderful communities that have kept the classic Hawaii way of life alive in the midst of the large build-up of the past decades. This gives you the best-of-both-worlds in many cases, with access to all kinds of shopping and entertainment, yet you can still go home where neighbors wave to each other and genuinely care about how you're doing. That's two sides that make up one great neighborhood.