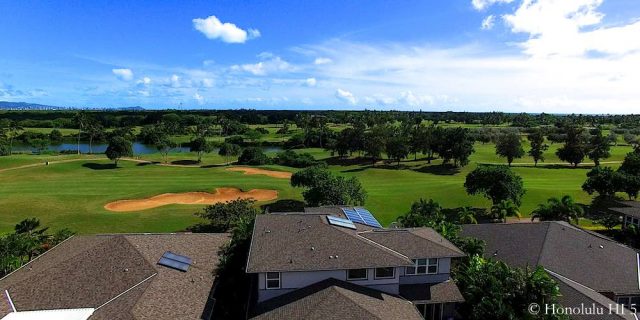 Not too long ago, Ewa Beach was the last place you’d ever expect golf course communities to spring up. The Ewa Plain had been famously converted from what was arid terrain into prime agricultural land in the late 19th Century by James Campbell through his unprecedented discovery of water sources deep in the ground. That led to a growing population, almost completely made up of a working class community that centered around the plantations.

The demise of those farms, starting in the late 80’s, created the vast majority of Ewa Beach real estate we have now. Still, this was an area whose primary selling point initially, and still is for much of it, was greater affordability.

The west side of Oahu was a pressure valve to relieve the escalating demand of the many who could not afford the prices of homes in Honolulu. That doesn’t sound like a place you’d expect golf courses to spring up, let alone residential projects centering on them. Yet they were there in the planning from the start.

As you’ll see, some of these neighborhoods surrounding the links are firmly middle class, rather than the typically more upscale residences you’d expect. It’s all part of the unexpected that has become a distinguishing feature of Ewa Beach real estate. You’ll see what we mean as we stop by the golf course communities of this growing city and find there’s something very different happening there – and that’s a very good thing. 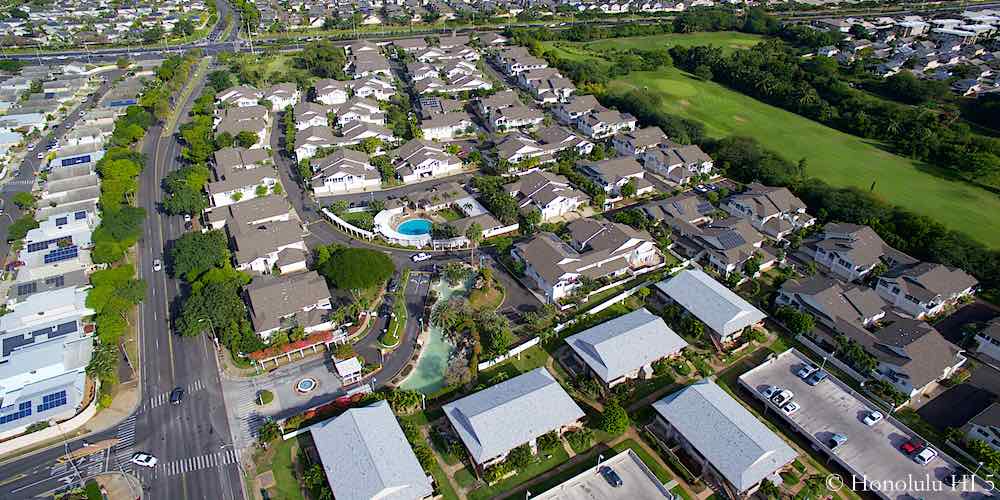 Arbors was among the initial neighborhoods of the Post-Plantation era, built in 1991 along the Coral Creek Golf Course. It’s strictly townhomes here, standing out as one of just 2 of these communities in Ewa Gentry that are gated.

The interiors are very attractive, comprising 2BRs of 1,009 to 1,196 sq ft or 3BRs with 1,526. The open, loft feel of the layouts keep the air circulating on hotter days as well as brightening the spaces for a lighter mood to these Ewa Beach homes.

With many of the residences coming with 2 car garages and a large courtyard in the bargain, these feel like single family homes, one definite reason for their consistent popularity, even as they’ve become relatively older in comparison to the rest of the area. 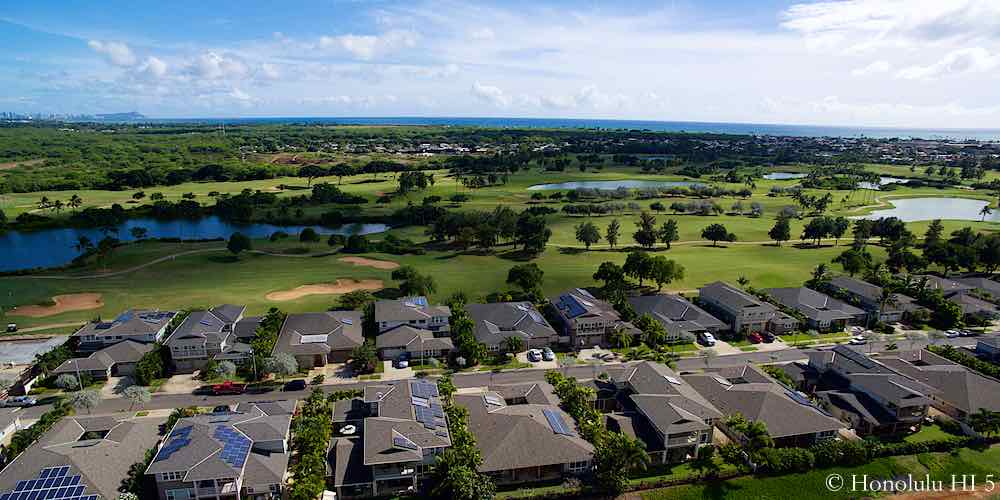 Those looking to take a step upward will want to look over Cypress Point’s homes. These single family homes bordering the Hawaii Prince Golf Course are clearly intended for those who want some extra room inside to enjoy.

The huge walk-in closets and gourmet kitchens and high ceilings are among the touches that set them apart as providing for the owner with a more indulgent lifestyle. The separate guest or maid quarters that are found in the larger homes underline fully that these are grander residences, if you missed the 7 figure prices these all go for, when they are available.

Cypress Point is something closer to the picture one has of a traditional golf course neighborhood, the homes meant to match the luxurious green of the grounds they sit along.

Hugging the Hawaii Prince Golf Course, you can enjoy the scenery from covered lanais that are on both front and back of every house. Inside you can also relax in your soaking tub, separate from the shower, under 9 foot ceilings covering most spaces. It’s all part of the community’s love of Island living and the Island itself.

Ewa Gen Kula Lei
Kula Lei is another earlier entry of the Ewa Beach real estate expansion, the lots filling in between 1996 and 1999. The project won Division 3 of the Parade of Homes in 1998, the sole winner in Ewa that year.

These are homes for large or multi-generational households, the 5 models running from 3 to 5 bedrooms over 2 floors and 1092 sq ft on up to 1562 sq ft, though the living area is expandable for those who need more.

With 2 car garages and fenced backyards, this is a place for families to live and play, something greatly needed on Oahu. That’s certainly a prime reason why they remain solid sellers even as new neighborhoods are added nearby. You can’t argue with success. 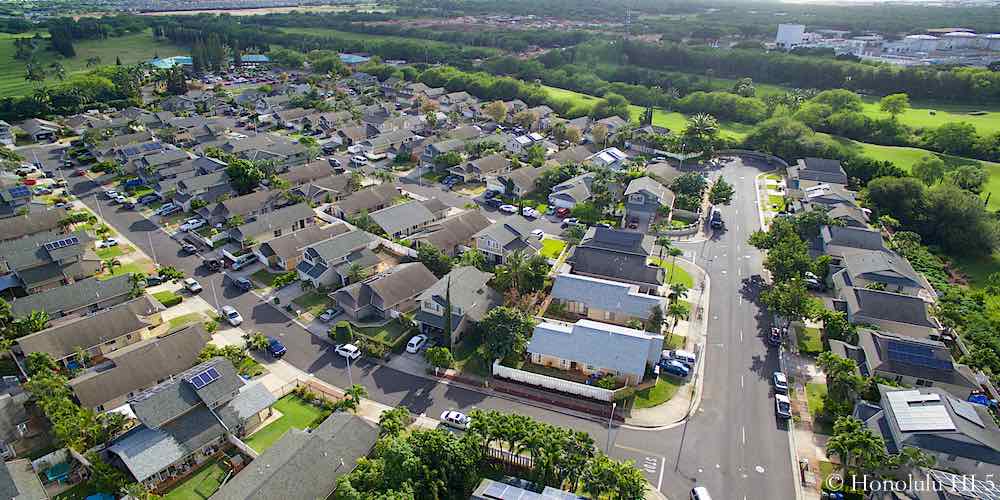 Built in the 1999, Sun Terra South reaps the pleasures from being surrounded on 3 sides by the Coral Creek Golf Course, meaning more homes get the views here and that there’s a solid buffer between you and outside noise.

The 3 and 4 bedroom models span from 1368 sq ft to over 2000 in some cases, but all offering front and back yards along with at least a short driveway leading up to your 2 car garage. In certain cases, 2 Master Bedrooms are inside, too.

This neighborhood seems to have had more remodeling done than most, so you’ll find individual variations in size and layouts. One of them might be the exact right match for you.

Ewa Villages
Ewa Villages modern birth truly accelerated just before the millennium and continues today. Much of the district is contained in sub-neighborhoods that are more or less within Ewa Villages Golf Course, sometimes with green fairways on all 4 sides. Best known of these are the Lokahi on the Greens subdivision that enjoy the emerald spans that make up their views.

With 3 to 5 bedrooms, in single and dual level layouts, across these Ewa Villages homes you can fit larger family units in here and the dominant architectural style, known as ‘Modern Plantation’ ties them firmly to the Ewa Beach home style tradition. That general blueprint extends to the in-process Ho’onani neighborhood here, with its 7 models that all take up 2 stories.

The newest addition in this area, they round off an already attractive community that has sold quickly with every new release.

Hoakalei Ka-Makana
Ka Makana was the first built Hoakalei neighborhood, taking up the northernmost section of the district. Divided into 2 model categories, Koa Lifestyle (4BR, 2545 to 2612 sq ft) and Koa Premier (3 to 5BR, 2123-3552 sq ft), all but the smallest Koa Premier style have 2 stories to them. 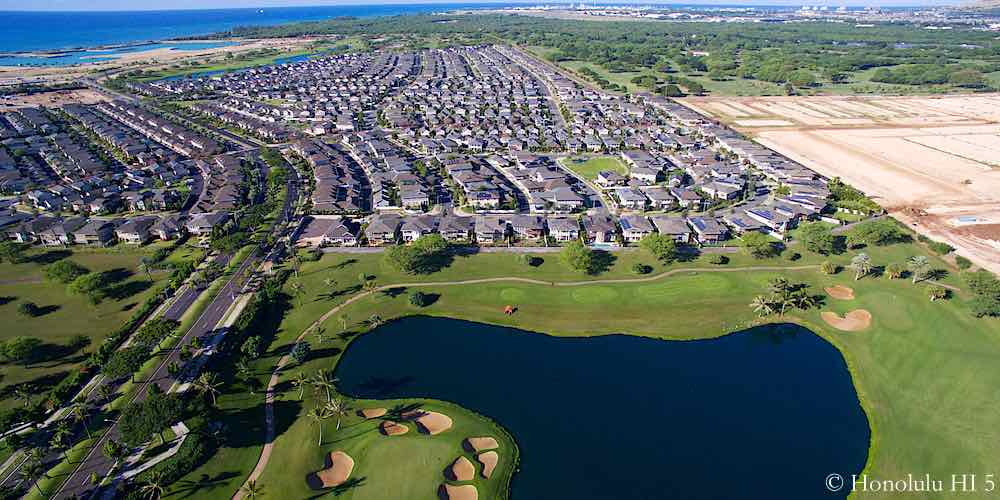 The American style architecture is mixed with European touches that make them as visually arresting, yet welcoming. In addition to the grand main lagoon of the resort, residents also have their own neighborhood recreation center, with a pool and tennis courts that rival those you’d find at an upscale hotel.

The immediate, rapturous reception of these new-era Ewa Beach homes proved that Hoakalei was not just off to a good start, it would be a winner in the long run, too.

Hoakalei-Kipuka
This gated community was the Grand Champion Award winner in the 2014 Parade of Homes, so you know these are well designed homes. Your options come in either the Garden Series (all 4BR, 1656-1719 sq ft) models, which mostly look out on greenways, or the Golf Series (4BRs, 2030-2234 sq ft) that line the course that is on every side of the neighborhood. You can enjoy that view from your master bedroom’s covered lanai whenever you like.

Some layouts contain first floor guest suites, so kupuna have a safe place of their own to live. Plus they’re all designed to let in plenty of natural light, which can make a home feel wonderfully embracing.

The recreation area exclusive to Kipuka includes its own pool and spa facilities as well as a play area for the keiki to enjoy themselves. It’s like having a resort of your own, within a resort.

Hoakalei Kuapapa
Kuapapa residents have the viewing opportunities of the green stretches and water features of Hoakalei Golf Course or the untouched preserve that gave the neighborhood its name. The greatest variety of houses in Hoakalei are here, with 5 Series that have 2 to 5 different models in each.

The range of styles encompasses the seaside cottages of the Loulou series to the grand homes of Koa Premier, with New England and Southern schools appearing in between. You’re assured of 1634 to 3552 sq ft of interior to enjoy and roughly 4000 to 7000 sq ft lots within the gates of the community.

In addition to their own recreation center, this is the closest residential area to the coastline, making them even more attractive. The resort lifestyle has reached the homes of Ewa Beach. 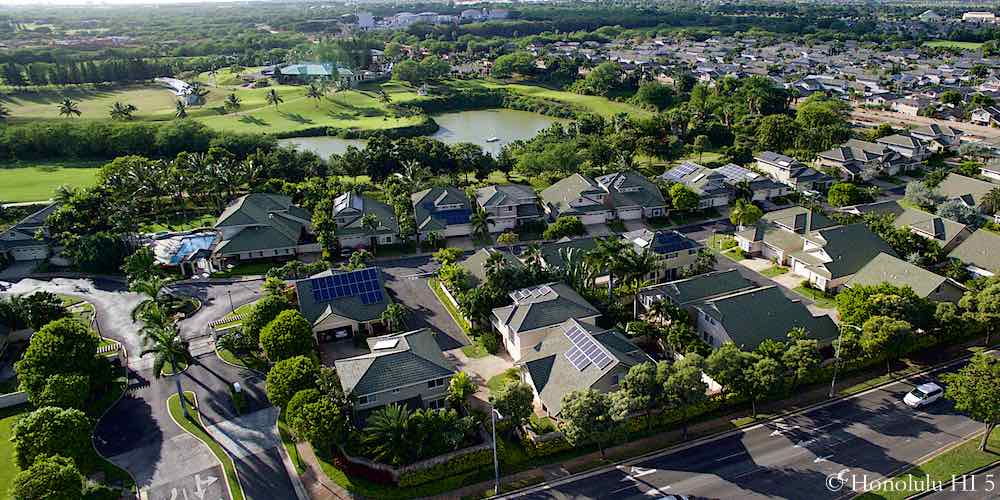 Dating from the early 2000s, Huelani was intended as a more leisure oriented community, with much of its residences sitting against the southern section of Coral Creek Golf Course. That focus is the reason for the extensive recreation center with its large pool, with cabanas, a full fitness center and a spa, with vistas of the fairways for all to enjoy.

For those seeking something more to do close to home, but not ready for the full resort lifestyle, this is an excellent place to put your welcome mat out. 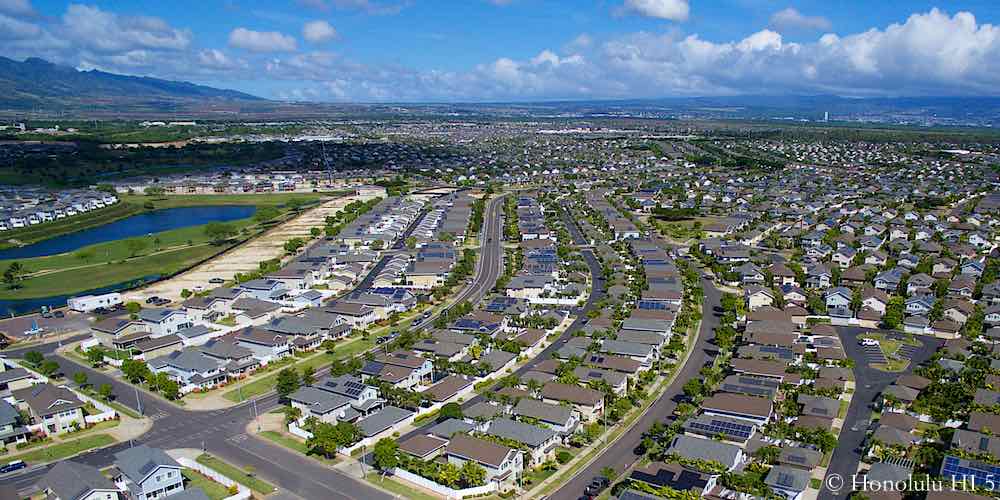 Found on the eastern side of Hoakalei Golf Course, Ocean Pointe extends the original Ewa Beach on its former northwest limits. The neighborhood includes both single family homes as well as a few townhome communities that have a personality and features of their own.

The majority of the residents have perk of being within walking distance of the beach and most townhomes have a recreation center with pool inside their own little enclave. Our main concern is the Town Homes at Fairways Edge community that stand on the lands next to the course.

Every unit takes up 2 floors, with lanais on both, wrapping around on some to maximize the vistas. Inside are always 3 bedrooms over 8 floor plans of 1005 to 1196 sq ft, while outsides are characterized by fenced yard areas and patios for socializing or relaxing. They’re the perfect solution for anyone who likes the idea of a single family home, but maybe not the upkeep or the higher pricing.

Westloch Estates
One of the neighborhoods that introduced the change in Ewa Beach real estate, these single family homes welcomed their first owners in 1990, with more built in spurts for years after. Taking up the mauka side of Westloch Golf Course, they have 3 to 5+ bedrooms within them. Generally, buyers can expect approximately 1500 sq ft at the lower end, the larger houses becoming quite large.

The most distinctive feature of all is the neighborhood’s arrangement. Westloch Estates is structured so that the bulk of the lots are on a cul-de-sac, bringing privacy and noise-limitation benefits to the maximum number of residents.

The quality of the residences, the cul-de-sac factor, along with the possibility of a front row seat on the links have combined to keep Westloch Estates at the top of many shoppers’ lists. 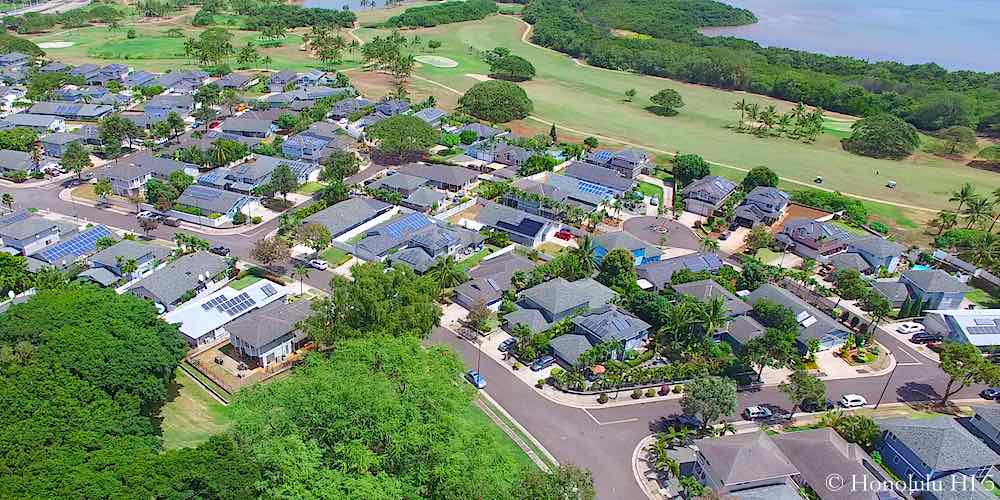 Westloch Fairway homes are a little newer than Estates’, coming up mainly between 1993-1994. Taking up the lands on the south of Westloch Golf Course, this Ewa Beach neighborhood has both single family homes and townhomes, broadening the selection of real estate.

The most common layouts of houses are 3 to 4 bedroom, in both single and dual levels, that take up from a little over 1400 sq ft to almost 2000. Lot sizes tend to be larger than the Estates, creating greater breathing room between neighbors, which is a definite selling point.

Another difference that’s immediately noticeable is that the cul-de-sac orientation was not used in Fairways. That restores a fluidity to the streets, making getting around easier, something that makes a late start to the commute less stressful.

This is a different animal to its counterpart across the course, giving you a real choice in what you want from your home between the two and there’s nothing wrong with that.

Ewa Beach Real Estate – Something Different Around Every Corner
Ewa Beach homes still tend to have a monolithic image to most outside, but that does not resemble the reality at all. The golf course communities alone should convince you of that by now. From the full resort lifestyle of Hoakalei to the leisure orientation of Huelani to the more typical home experience of Ocean Pointe, you get the full menu to choose from, with more on the way. You’re sure to find something just right for you.