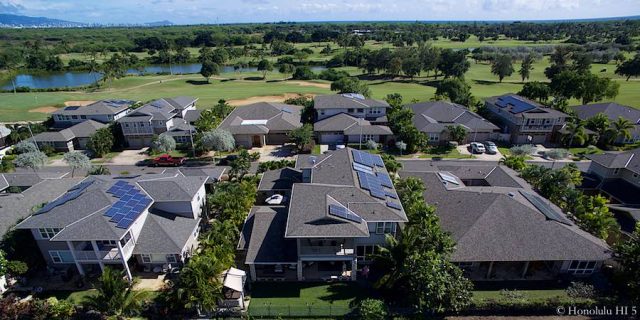 Hoakalei and Ocean Pointe make up the westward expansion of the original Ewa Beach town border, pushing it closer to the inevitable merging with Kapolei to form the complete 2nd City of Oahu. Despite these 2 neighborhoods’ close proximity to Ewa Beach’s longstanding community, the lands that make them up were never settled in any significant way until now. Instead, anyone heading leeward after leaving Ewa Beach’s former limits would have traveled primarily untouched land for most of history. That doesn’t mean that they were unknown or unexplored, though.

Hoakalei’s name sprang from an Ancient Hawaiian legend about a water spring here and a goddess who stopped at it on her way across the Ewa Plain. The story goes that Pele’s sister, Hi’iaka, was traveling to Kauai and came to the spring, which had lehua trees growing on both sides of it. She made a lei from the flowers of the lehua and put it on, delighting in the water’s reflection of herself and the beautiful blossoms around her neck. Thus the name ‘Hoakalei’, which translates as ‘reflection of a lei’. That wasn’t the only significance of this area in Pre-Contact times.

Some of the lands that make up present day Ocean Pointe and Hoakalei were believed to be part of a fabled territory called kula o Kaupe‘a. This was the dwelling of lost souls, who Hawaiians believed had not been found by their family gods (aumakua) or missed the leaping off points to the next world after passing.

Caught between these worlds, they wandered this area, seeking a way to make the journey or hoping their aumakua would come for them and take them to their new home. As you can imagine, this section of the district was left alone and unsettled.

The rest of these lands have revealed Ancient Hawaiian homes and structures, showing that some did live here, just not in the numbers that they did to the immediate east. An important reason was that they lacked a significant fresh water source. That missing necessity limited the population, a restriction that lasted for centuries.

Most who did dwell here were drawn to the ocean’s supply of fish and sea life that provided abundant food. The archaeological evidence indicates that this was a seasonal residence in many cases, a good number of the Hawaiians living here only at certain times of the year. They came during the months when the fishing was best, then leave when the catch declined, returning again the next year.

There were year-round residents, but primarily where Ocean Pointe now sits. This is probably due to its location eastward, closer to the larger settlements and greater fresh water resources. There they were able to grow some small crops, but they also subsisted on fishing, just like the rest of the coastline.

None of these groupings ever extended beyond a few families at most, making them a local version of frontier living. This would remain the pattern for centuries, the lands providing only enough to support a small number or, at times, lying almost deserted.

THE PLANTATIONS ARRIVE IN EWA BEACH
James Campbell finally solved the Ewa Plain’s water problem in 1879 when his teams dug down far enough to tap wells no one had ever realized were there all the times. The changes in technology finally made it possible to not only locate, but utilize them and he did this on a grand scale. By buying up almost the entire Plain and applying up-to-date techniques, he was able to turn it into a massive sugar plantation that produced huge harvests year after year.

Some of the Hoakalei and Ocean Pointe property were part of his purchase, but very little of it was actively farmed. It remained in its state of hosting a few residents at times, but otherwise left mostly alone. Fishermen still made their way here, usually for the day and then returning home to Ewa Beach with their catch.

An aerial photo of the coastline from 1928 bears this out, showing undisturbed lands covered in thick vegetation. Look closely, though, and you can see 2 or 3 small homes right on the beach where Hoakalei’s lagoon now lies, the residents sustained by a small nearby well. As tough as it must have been to live almost alone out here, the fishing still made this real estate an attractive draw for some.

The arrival of World War II would finally end some of the isolation that reigned here. The expansion of Barbers Point in the wake of the Pearl Harbor attack reached this property, the military taking it over for training. Maneuvers and mock battles were played out here in order to ready forces, first for a possible Japanese invasion and then to prepare them for the Pacific Campaign.

Much of this property would be returned to the plantation owners after the war, the biggest transfer back to civilian hands coming in 1949. Once again, the property would become quiet, welcoming day visitors of anglers and Ewa Beach children who loved to explore the area down the coastline from home. 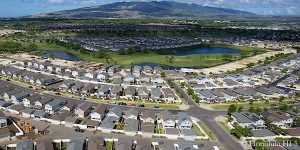 Ultimately these two neighborhoods would come alive with the sell-off of Ewa real estate after the plantations met their end in the 1980’s and 90’s. Ocean Pointe naturally was the first to emerge of the two, being next door to the existing Ewa Beach community. Developed by Haseko, they opened the different divisions of this neighborhood over the course of a decade, from 1998 to 2008.

Ocean Pointe single family homes consistently bring Oahu real estate buyers quickly once listings go up. It’s no mystery why because Haseko has created a neighborhood that brings 3 of the most desired, yet often difficult to find, features that locals love in a residence.

Every single house on these streets promises a fenced yard, central A/C and a 2 car garage to their occupants. There’s also a variety of plans and layouts of both one and two story, many using the New England architectural designs brought by the missionaries that have become a beloved part of Hawaii’s landscape.

Added to this are the fact that many have golf course views, while the beach is within walking distance for most residents. The more you find out about Ocean Pointe houses, the more you understand their popularity. The only mystery may be why you hadn’t looked at them before.

Ocean Pointe townhomes are gathered into sub-communities of their own. Like their single family home neighbors they have strong appeal and for good reason. A couple of examples will show you why. 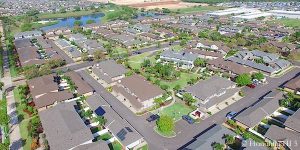 The Townhomes at Fairways sit on the eastern side of Hoakalei golf course, so you can take in the cooler evenings from your lanai, looking out at the green stretches before you or even at the small lakes that make up the water hazards.

They also have fenced yards on each residence and, best of all, large dimensions that start at 1,000 sq ft, only getting roomier from there. 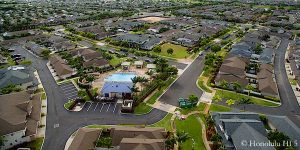 These Ocean Pointe townhomes continue the tradition of bigger spaces beginning at 1,000 sq ft, private yards and two stories for privacy and noise reduction benefits that are so important for homes with keiki.

Spinnaker Place also gains from being sited in the midst of 3 golf courses, as well as having large open spaces of its own created for kids and families to enjoy and play upon, close to the safety of home. 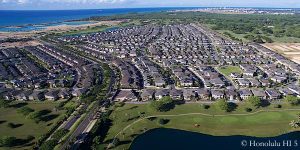 Hoakalei real estate follows a model that is more upscale, similar to the one in Ko Olina. A combination of homes and a resort property give these residents an enticing lifestyle of leisure and higher-scale amenities.

One of the most visible benefits of this is the massive lagoon created on the property. Initially intended to be a marina, Haseko changed course and left it enclosed for full recreation possibilities. ½ is private, for residents and resort guests only. The other ½ is public.

There is also the Ernie Else Signature Golf Course to challenge duffers, as well as to provide a green backdrop for the pleasure of home owners here.

The homes all are of recent vintage, being built in the years between 2009 and this year. The 3 neighborhoods are all gated and owners have the privilege of use of the Wai Kai Club, including a launching area into the lagoon that is members-only. As attractive as that is, the Hoakalei houses by themselves have more than enough on their own to make an easy sale and a satisfied new owner.

Ka Makana
Ka Makana has 7 floor plans, with a distinctly American architectural styles. The eye-grabbing design elements ensure that these homes do not blend together or fade from memory. You can drink in the golf course views as well as use the community’s exclusive recreation center, where you’ll find tennis courts, pool and fitness center reserved for you and your neighbors only.

Kipuka
These residences stand out for being in the very midst of the course itself, surrounded by it on all 4 sides. The homes are divided into Golf & Garden Series. Both provide 4 bedrooms over two stories, with the Garden layouts slightly smaller and looking out primarily at greenways. The larger Golf houses have mainly fairway views. Like the other 2 entities, Kipuka owners also enjoy their own community recreation center to enjoy.

Kuapapa
The most luxurious neighborhood is also the latest, Kuapapa. It actually contains 5 sub-neighborhoods of its own, each with unique floor plans. Their appeal runs the gamut, with styles from New England to Southern to European. The dimensions are all extremely roomy, providing 3 to 5 bedrooms so they’re perfect for large families or those who like to entertain.

All Kauapapa homes look upon the golf course, some positioned perfectly to take in the evening sunset over the ocean. It’s no wonder these have sold so well and so quickly.

Ocean Pointe and Hoakalei real estate are an exciting result of the new Ewa Plain that becomes more and more evident each day. The appearance of these high-demand and sometimes even luxurious homes on property long thought uninhabitable is one more unmistakable sign of the progress made in West Oahu.

Once believed to be lands that were almost worthless, neighborhoods like Ocean Pointe and Hoakalei are proof that the real estate balance that leaned so strongly to Honolulu is now shifting westward. Something big is happening in Ewa.