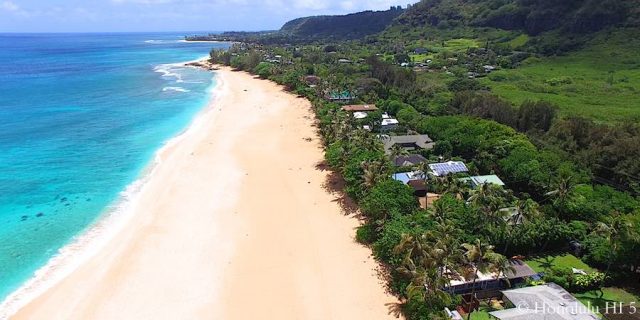 The North Shore of Oahu seems to have been one of the last parts of the Island to be settled by the Ancient Hawaiians. Most date the first communities along this coastline to have started around 1000 A.D. and they soon flourished.

The fertility of these lands made growing crops easy, with the Hawaiian diet staples of sweet potatoes and taro especially being produced in large quantities. Numerous fresh springs on these lands supported a population that would continue to grow, with the ocean waters providing fish to add to an already plentiful food supply.

THE NORTH SHORE’S STATUS IN ANCIENT HAWAII
The recognized value of the North Shore lands made them a great prize. This status was clear after Oahu’s ruling chief, Kamapua’a, granted the ahupua’a of Waimea to the High Priest (Kahuna), of the Island. The importance of the kahuna to the life of the Island, and the ruling families, meant that he would be given only the best.

This ownership of this ahupua’a would pass down for more than 600 years through the successive High Chiefs, creating a seat of Oahu’s religious power that lasted until Queen Ka’ahumanu eradicated the old Hawaiian ways in the early 1800’s.

What many don’t know is that Oahu’s first Western contact happened here, when Captain Cook’s ships sailed into Waimea Bay in 1779. The British Navy stopped to get fresh water after fleeing the famous Big Island battle that resulted in Cook’s death.

They recorded that this coastline had many villages as well as confirming the large areas of farmland the Hawaiians cultivated up here.

The early 1800’s, though, would bring seismic changes to Hawaii that reached even the North Shore lands. The first event was the end of the Kapu system, which was the foundation of the religious and social structure of Hawaii by Queen Ka’ahumanu.

Shortly after the missionaries arrived bringing Christianity, which Ka’ahumanu embraced, supplanting the former Hawaiian religion across the Islands. The result of this was another Western ship that landed on the North Shore at Waialua Bay in 1832, this time carrying more missionaries who made their home here and established the Waialua Protestant Church.

The last ruling kahuna, Hewahewa, would not pass until 1837. Even after the end of the Kapu system he still held ownership of most of the Waimea ahupua’a just as before. More changes were coming, though, the biggest in the form of the Great Mahele.

Lands were divided up, much of it made available to buy. Some was still reserved for the ali’i, which is how Hewahewa’s grand-daughter was still able to hang onto half of Waimea Valley.

THE PLANTATIONS ARRIVE
During the Post-Mahele years the rich soil of these lands brought the new plantation concerns calling. They quickly bought up large areas, creating the small towns and communities that grew up around the imported workers whose lives were tied to these farms. They worked to grow the sugar and pineapple crops that made huge profits.

The major concerns here included the Waialua Sugar Planation and the first Dole plantation and processing plant. Waialua was first farmed in 1865, but passed through 2 owners before it was finally sold to Castle & Cook by 1898, who would run it for almost a century.

Dole came to this part of Oahu in 1901, growing primarily the pineapple that made their name famous worldwide. The fact that they still have a presence there today as part-farm, part-tourist attraction speaks to that success.

These farms grew the population greatly as well as diversifying it as Chinese, Japanese and Filipino workers moved here and lived in the plantation’s created homes and communities. Haleiwa grew to become a town at this time, businesses springing up to serve the new population.

The North Shore was also the site of innovation, this time the brainchild of another iconic Hawaii name – Dillingham. Benjamin Dillingham, a director on the Wailua Sugar Company board, built the Oahu Railway and Land Company, its railroad running from Haleiwa to Honolulu to transport the sugar to the shipping center. Soon an idea came to him. Why not encourage a passenger trade that would use round trips?

To do so he created the first luxury hotel in Hawaii in 1899, the Haleiwa Hotel. Wealthy locals as well as some visitors to Oahu rode the train to this plush getaway, leaving the stress of early 20th Century Honolulu behind.

Ultimately the competition with Waikiki could not be won, causing the shut down of the resort in 1943, but leaving an enduring legacy behind. The name ‘Haleiwa’, which means ‘House of the ‘Iwa’ (frigate bird), was given to the hotel by Dillingham himself. It was later taken formally by the entire community around it, becoming the name the town holds today.

The plantations would remain up here for most of the 20th Century, longer than anywhere else on the Island. This, combined with its remoteness and an engrained local resistance, is why North Shore real estate did not undergo the development the rest of Oahu did during the post-War years.

Waialua would be the very last sugar plantation on the Island, persisting until it finally closed in 1996.

All during this time the North Shore outside of the plantations continued in the same pattern that had begun here long ago. There were small, scattered communities, with farms here and there, the residents enjoying the isolation and unspoiled scenery. 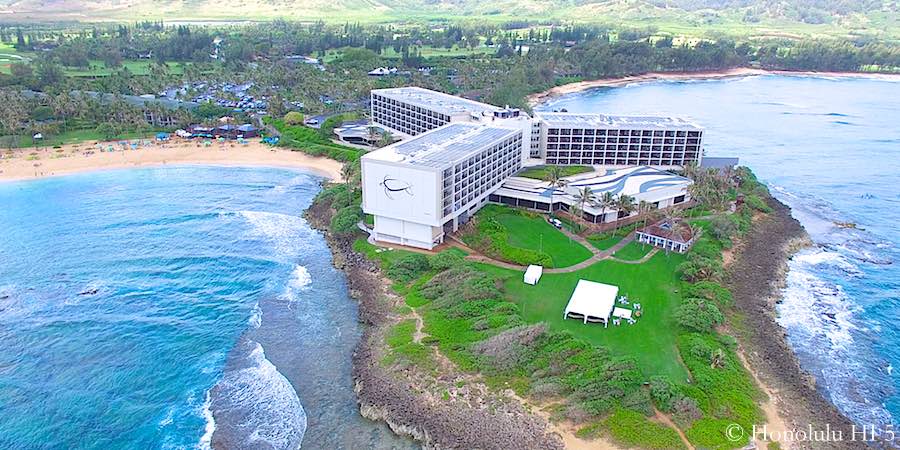 Still, things were slowly changing. In 1972 the resort at Turtle Bay was opened, intended to be the first casino in Hawaii. Unfortunately, the laws allowing gambling did not pass as the original owner though they would. Hyatt took over, successfully emphasizing the incredible backdrop of its oceanfront property and, like the old Haleiwa Hotel, its contrast to the urban Waikiki.

Another, possibly greater issue, was the growth of Surfing and surf culture in the 1970s, the North Shore waves representing some of the greatest challenges in the world. The name North Shore was soon known worldwide, bringing tourist crowds and making home values along this coast rocket skyward.

Development did, and has, come to this district, but in a very abbreviated form. The community has made it clear that high-rise structures and anything beyond small new neighborhoods are unwelcome.

It is significant that this is the one and only area of Oahu where the closing of the plantations did not result in large new building projects on their former lands. In fact, in certain cases, property has been bought specifically to keep it undeveloped in perpetuity.

Large projects have been proposed over they years, but they’ve always met strong organized opposition that has stopped them in their tracks. That is not likely to change.

Still, there have been some additions to the shoreline recently, just in smaller numbers and in ways that do not impact the environment or feel of this place. Boutique developments, in other words. 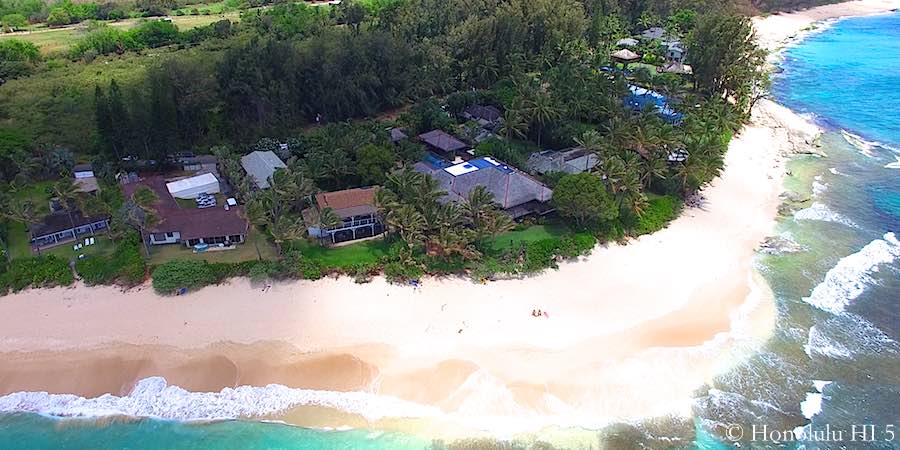 Homes in Kawailoa is the current peak of high-end North Shore real estate. Its homes sit on the coast, many oceanfront in the area between Waimea Bay and Haleiwa. Some homes are smaller, original vintage from the early decades of the 20th Century. Since the new millennium, however, large mansions have been added that take full advantage of the world-class wave watching views.

More than just extensive houses, the size of both the homes and lots cross over in some cases to the ‘small estate’ category. Their renowned luxury level as well as the location between the shops and restaurants of Haleiwa and world famous surf spot Waimea Bay make this something of a private club with quite a long waiting list. 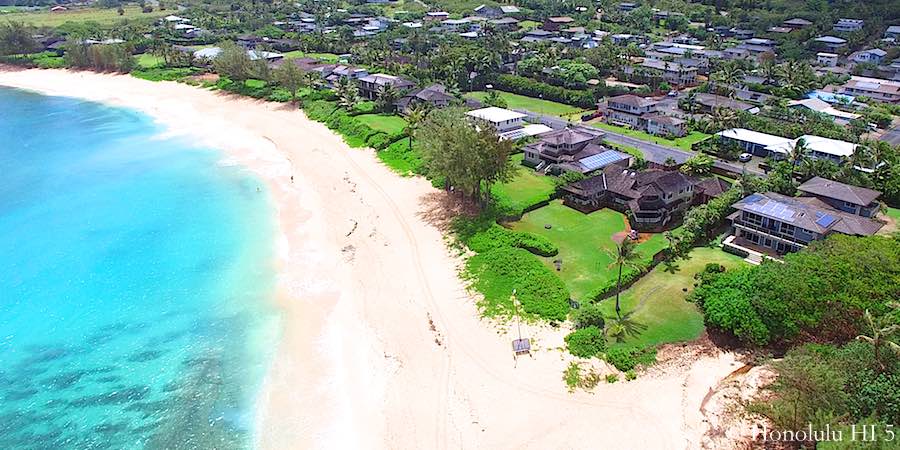 Sunset real estate is another mix of modern North Shore. Old surf shacks sit next to huge, recently built homes, with very little in between. This is an iconic stop for the professional surfing world, making living here something to brag about.

Possibly the most significant addition here has been Sunset Colony, built by developer and politician Andy Anderson. The premier gated community on this coast, there are just 30 houses in it, all with huge dimensions, many right on the ocean and price tags that start in the low 7 figures. Moving to Sunset is no longer the dream of just beach bums, it’s an aspiration for captains of industry, too. 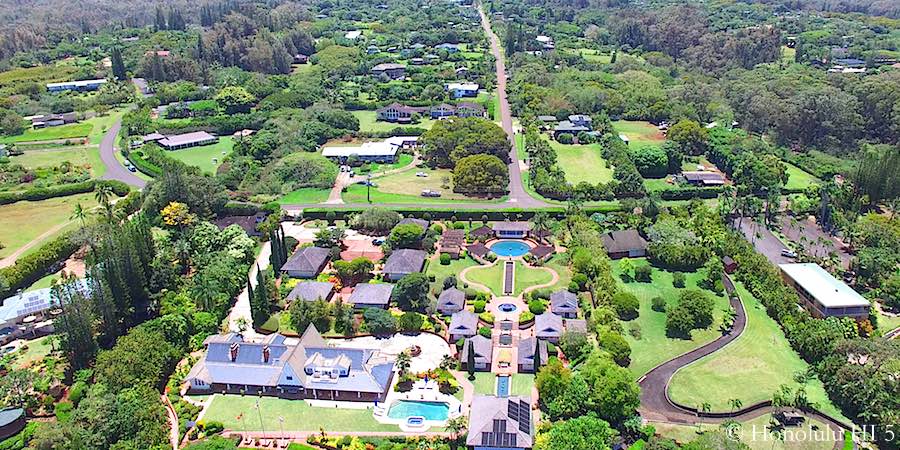 Pupukea’s real estate truly came to life in the last 30 to 40 years, these residences giving you something extra because of their Country classification. That means lots of 1 acre beneath your house here.

That room is used to its potential in most cases, with houses that have multiple bedrooms and large spaces under the roofs. Despite that fact that most are spread out toward the mauka side, many still enjoy ocean views due to the elevations and a complete lack of development around them outside of their neighbors.

Sunset Hills is the most exclusive of the different areas, its homes definitely hitting the high end of Pupukea and incredible views to match.

Preservations should be especially drawn here. After a proposed development project was defeated in the 1980s the community, with various organizations, has banded together to buy property around this area. Once purchased it will be left to flourish, safe from ever being built upon. Try to find that kind of security anywhere else in Hawaii. 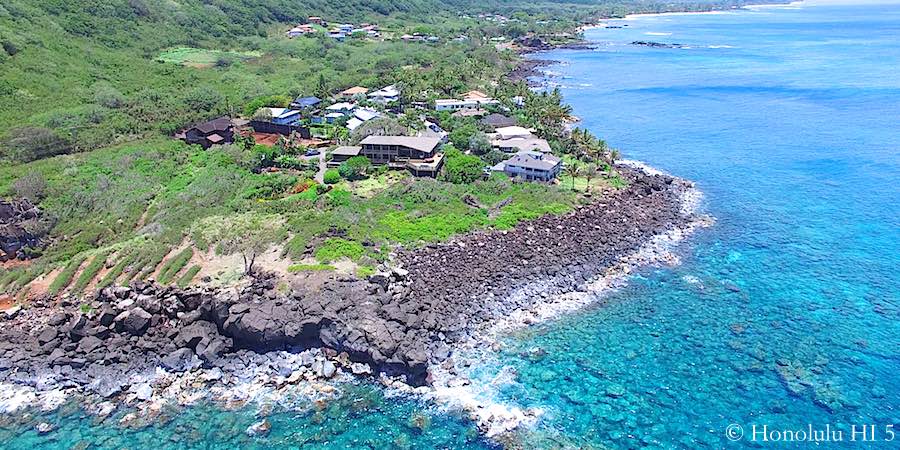 The houses of Waimea stand right on the east side of the bay that shares its name. With only 2 streets and 15 homes total, the North Shore exclusivity is very present here. The homes were built mostly by the owners who bought the lots back in the 1980s and 1990’s. The luckiest buyers were able to get the 7 oceanfront properties, the remaining 8 still are extremely close to the swells, many still having clear views of them despite being set back.

The limited space between the highway and the land’s edge does mean smaller lots that expected at this price level, but that has not hurt the values whatsoever. Not when you live next to the natural magnificence of this place. 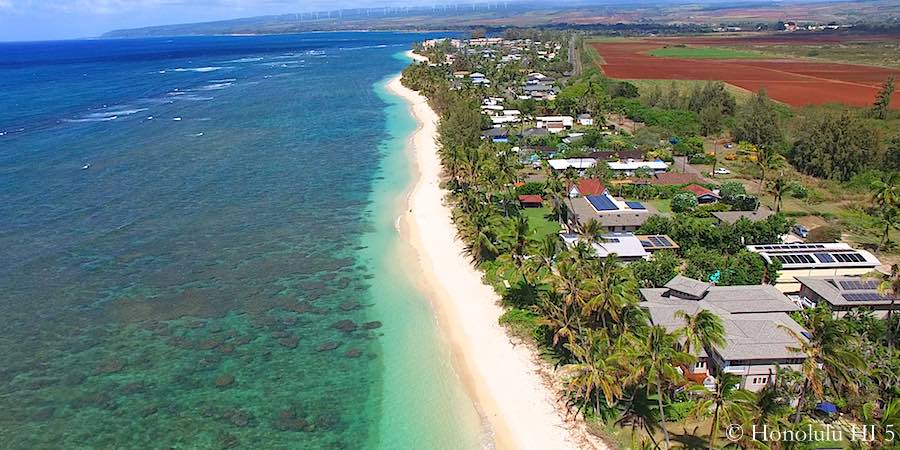 Much of Mokuleia was part of the vast Dillingham Ranch, first owned by the same man who built the Haleiwa Hotel. In the late 1900’s the family started selling off some of the property, including many that now hold oceanfront residences in this less traveled western section of the North Shore.

Some of the lots are very large here and the luxurious houses on them the result of individual owners projects, rather than a developer. Currently there are plans being proposed, though.

Kennedy Wilson, the owner of 2700 acres of the former Dillingham property have created a plan for 70 homes to be built on their mostly mauka side holdings. Individual lots would be 2 to 77 acres in size. So far, though, community members have opposed it, already getting a previous 106 home proposal rejected by the Neighborhood Board. Definitely a wait-and-see game that keeps the North Shore real estate world so dramatic. 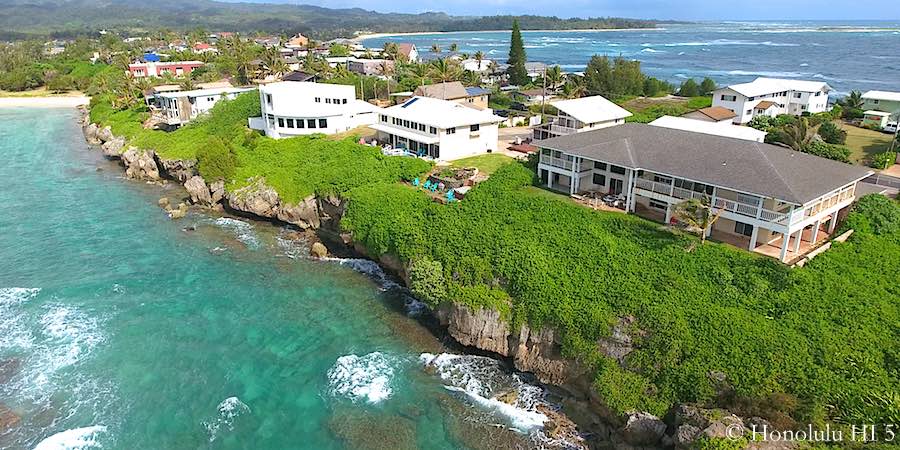 The ability of this part of Oahu to hang onto its rural environment in the face of a tidal wave of development that has engulfed the rest of the Island is nothing short of amazing. It does make sense, though, this remote district always being a place for the rebel, as far as possible from the power center of Honolulu.

This has made the real estate something extra special, a way to return to Old Hawaii when so many can now only strain to remember when things were so much simpler and the buildings so much lower.

This, along with the legendary waves, have brought more and more buyers with money to spend, pushing the prices and values skyward. No longer ‘the boonies’, this is now a very hot place to call home.