Kailua vs Kaneohe: Where Would You Live? 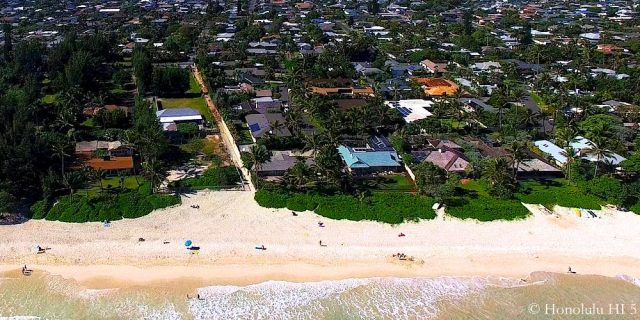 Windward Oahu properties primarily come down to 2 main areas, Kaneohe and Kailua. They are the not just the only two substantial areas over there, providing most of the available listings, they’re also the best commuting bets for the majority who work in, or have business ties to, Honolulu.

Although they are cheek-to-cheek neighbors, you’ll find that they’re more like two siblings. In many ways they resemble each other, but you can plainly see the differences that make each an individual. So it is with these two towns.

Join us as we take a look at the what differentiates them and why one just might where you should be looking for your next home. The answer just might surprise you. 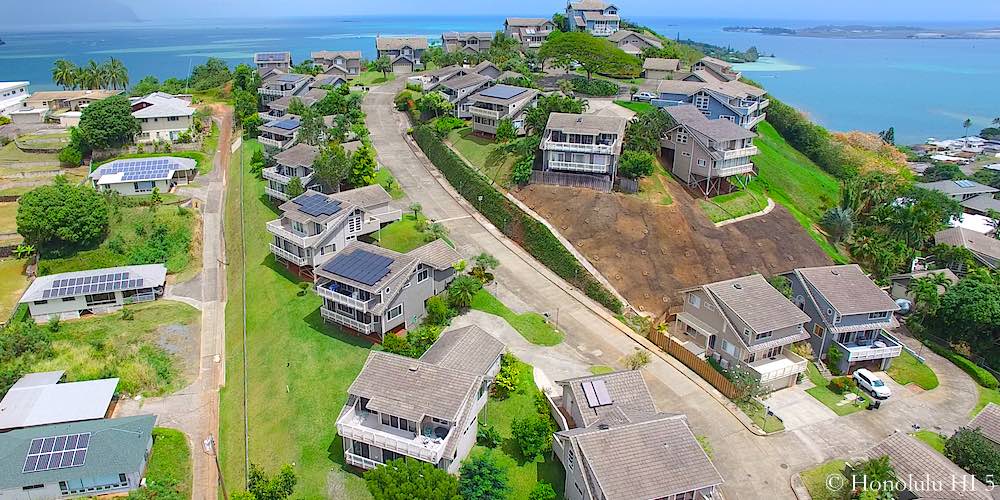 Kaneohe homes have been known to be more budget-friendly since Oahu real estate sprang into existence. That’s an important point as Windward Oahu residences generally occupy a more expensive tier than their equivalents over the Koolaus. So a break on that elevated cost makes this area stand out to most buyers.

We’ve found that recent years have balanced out to a media price for Kaneohe single family homes of $1.04M, but the range can go from $329K to $3.64M. Kaneohe’s range starts at $56K below Kailua’s lowest cost in the same years, $385K, and ends far below the $26M closing that one Kailua luxury property went for not long ago.

Condos in Kaneohe follow the same pattern, this time beginning at $89K, compared to Kailua condos’ low of $385K, and topping out at $799K, almost 28% beneath the highest condo sale of $1.1M in the neighboring town. In short, you can usually count on shaving off a certain amount of money for a home if you look on the northern side of the border that separates these two towns.

A Lot More Variety Than You Think in Kaneohe Homes
There’s more lifestyle choices available in the neighborhoods here, too. You’ll find everything from the houses of Mahinui that begin right where Kailua ends, reflecting the influence of that community in its homes and atmosphere. 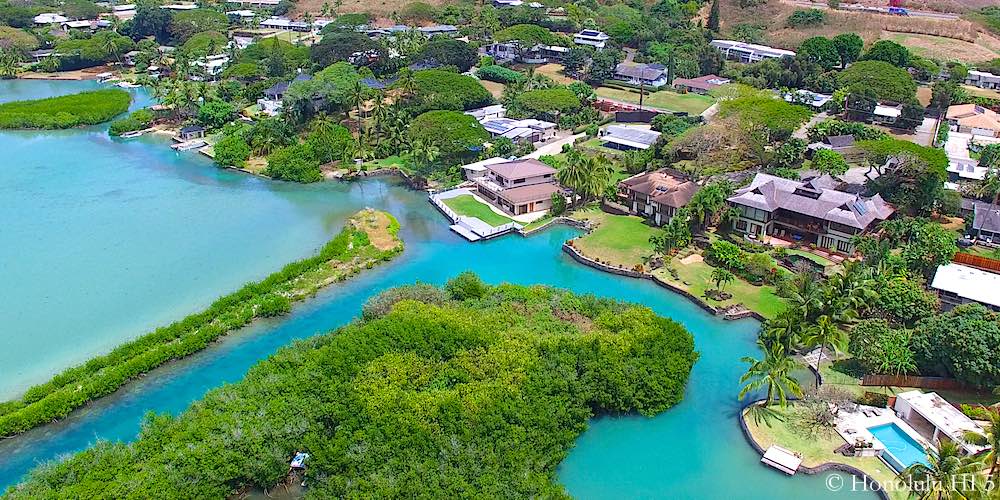 Head up to the urban center of town to Alii Shores or Mahalani, where old Hawaii homes and modern luxury structure enjoy being near, or even on, Kaneohe Bay, yet on the doorstep of so much dining and shopping.

Continue on and retreat to the quiet seclusion of the stunningly green Valley of the Temples or stick to the coastline and you’ll see small collections of homes, given names like Kaalaea, with tropical mountains on one side and crystal blue ocean on the other, the setting clearly becoming more and more ‘North Shore’.

If you like the views that can come when you live beyond the 5th floor, this is also where you want to be. No where else on the Windward side will you find these towers. Another view you get more of is the always enticing ocean, due to the sloping of the terrain here from the coastline as well as the hillsides above.

Owning a home away from the shore can still give you an outlook of Kaneohe Bay that will give you the greatest of pleasures as long as you live there. Outside of the Lanikai area, Kailua is generally flat land, restricting your vertical sightline, even with its low-rise profile.

The fact that the word ‘urban’ is used to describe at least the center of the town means this zip code holds the greatest collection of shopping and dining on the eastern coastline of Oahu. The presence of Windward Mall is the most obvious example, holding over 110 stores, with numerous restaurants and eateries as well.

Much of the main strip of Kamehameha Hwy is lined with offices, shops and more eating options, including the Kaneohe Bay Shopping Center. There’s nothing to match the number or range of choices anywhere else up or down this coast.

That also translates to more job opportunities, since more businesses have a presence in Kaneohe, it being the one place where substantial office and commercial space is available – and at more affordable rates than the relatively little found in Kailua. So entrepreneurs will have a lower cost not only in getting started, but ongoing as well.

For the many who still have to commute to Honolulu for work, Kaneohe has H3 right on its doorstep, giving you a much quicker start, or end, to that part of the day. While it’s difficult to quantify, it’s also hard to underestimate the advantage this proximity offers in these days of growing traffic and the personal stress that rises along with it.

Lastly, it’s no secret that buying Kaneohe real estate is attractive to some because the city is almost purely local and local-focused. The tourism and off-Island buyer wave that has swept over Kailua has not overflowed into this town. The absence of beaches, even with the undeniable beauty and recreation possibilities of Kaneohe Bay, along with other factors has made it less attractive to visitors.

For those who are wary of a place that deals with tour buses and crowds coming in each day, yet love the Windward side of Oahu, Kaneohe is the better fit.

There’s better fits for other Oahu home buyers, too. Kailua real estate is one many fall in love with today. So much so that it’s become one of the very hottest markets on Oahu. You’ll see this is no accident, but a result of a very good thing, with an only growing army of admirers.

Why Kailua Homes Attract So Much Interest 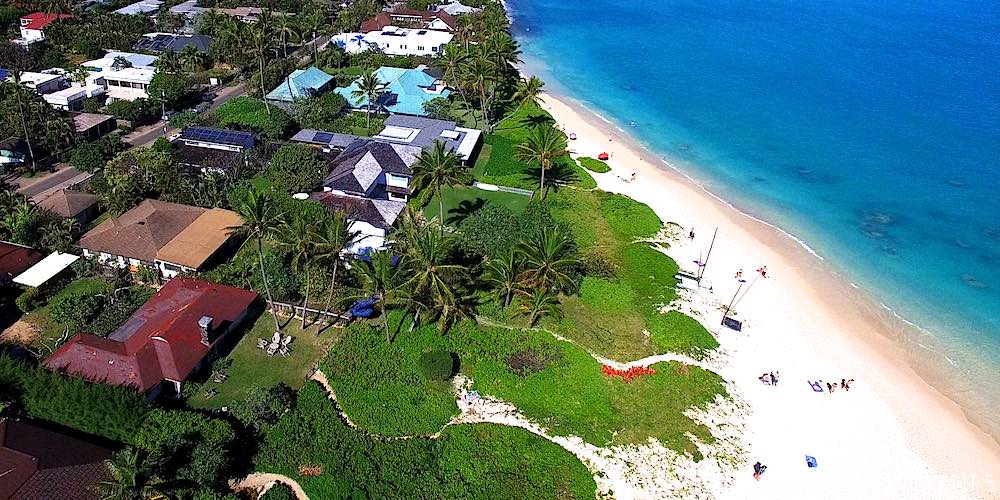 One of the earlier points should be qualified. While Kaneohe does hold the greatest concentration of shopping in Windward, Kailua contains Target, Whole Foods, Safeway and Foodland, Longs and Walgreens, plus an excellent and broad selection of restaurants and boutique stores, all in the main part of town. This is no bedroom community.

It is, however, one that seldom climbs past 3 or 4 stories. You will notice a very few, but their singularity is what makes them stand out so much. Otherwise, Kailua homes enjoy a feeling of openness and surrounding them, the sky stretching out before and above them.

One more good reason for that feeling is the reality of Kailua lot sizes averaging 10K sq ft versus Kaneohe’s 7673 sq ft, continuing to the interiors where Kailua wins again with 2180 sq ft to 2078 sq ft within their respective single family homes. Condos follow this same line, even if there are less of them here. Kailua condos average out to 1,270 sq ft of room, a substantial rise from the 922 sq ft Kaneohe’s average offers. In short, you’ll probably have more space, inside and out, when buying here.

Just Two Words – Da Beach
We can’t avoid addressing the most obvious attraction, the cause of all the traffic on the streets and sidewalks heading makai each day – the beach. A greater contrast couldn’t exist, with Kaneohe having no real beaches at all, while Kailua has some of the most famous stretches of sand on Earth. 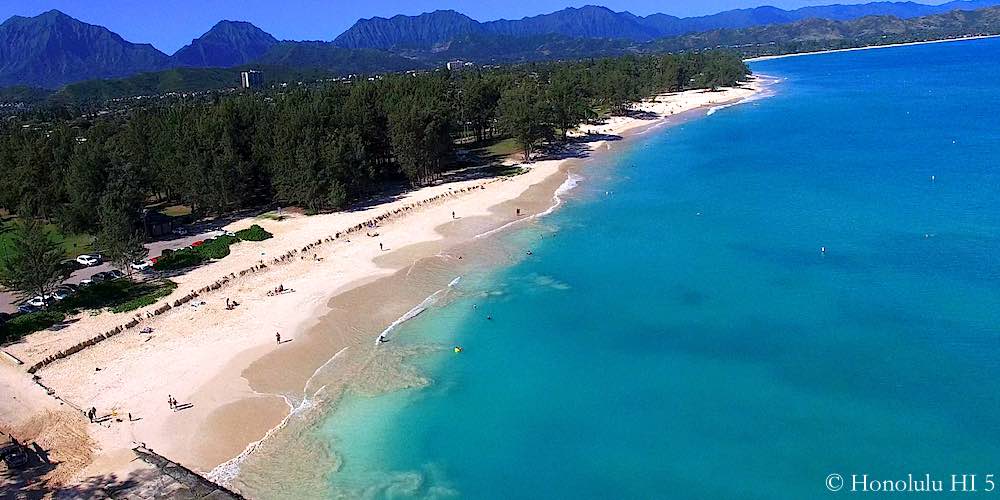 Those stretches extend far beyond Lanikai Beach and Kailua Beach Park, which get all the attention. While plenty of residents head to those in huge numbers as well, many opt for the equally wonderful sands and views north of that duo, where you have much less company. In places, you can have it to yourself, or something closet to it. Whether you like an active environment or something more solitary in your seaside, you can have it your way. Better yet, you just might be able to walk there, a benefit of many homes in Kailua.

The speed of the life is also a little slower on these streets. Kaneohe is by no means fast paced, but the busier central area, with its sometimes thick development and a large mall, inevitably raises the heartbeat of the place at least a little over the other sections of this side of the Pali.

Kailua remains a quiet place, characterized by a heavy emphasis on activity during the day, your late night options limited to the 24 hour Safeway. Coming into town on Kailua Rd, you’ll realize it’s not just your car that’s slowing down. You are, too.

If you’re an active bicyclist, you’ll find the avenues friendly no matter where you go. The speed limits make for a friendlier environment to those on 2 wheels and it’s accepted that they’re just as much a part of the traffic. More than a few locals bicycle around town on a daily basis, especially to the beach, as well as any errands or just to take in another beautiful day. In Kailua, getting there is more than half the fun when you live in a place like this.

Kailua or Kaneohe – A Tough Call
Ultimately, the undisputed winner on a budget basis is Kaneohe, which could be the clincher all by itself. However, it will also surprise you with homes, lifestyles and settings that most do not associate with the place. For that reason, it’s worth a look for almost anyone. Kailua is now a known quantity, its beaches and Hawaii throwback feel has in recent years created a housing demand that is nothing short of feverish.

It’s not just about the money, in the end. It’s also the fact that these are two communities that are both fully Windward Oahu, but different sides of it in some ways. Each has its own special resonance that makes its residents proud to belong there. The question is: where do you belong?