Ewa Beach vs Kapolei: Where Would You Live? 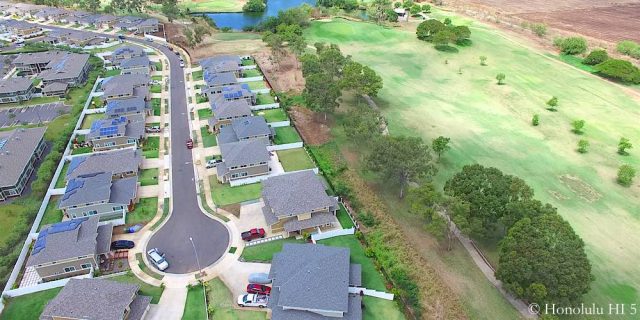 The 2nd City, made up of Ewa Beach and Kapolei, will soon be an almost seamless grouping. With Ewa Beach real estate development advancing westward the spaces that separate them won’t be discernible. There will not be a homogenous Metro area when this process is completed, however. You will still be presented with real choices when deciding on buying a home in Kapolei or Ewa Beach. It’s the kind of decision that will impact every day of your life.

From their different origins to the expansion plans each has remaining ahead of it, there are factors you need to understand as you begin your search for a residence that’s right for not just you, but your family. You will have the entire 2nd City to enjoy and benefit from, but there’s no question that where you will live in it is going to matter greatly to the experience. Let’s find out what those differences are, why they’ll matter to you and make your choice a little more clear. 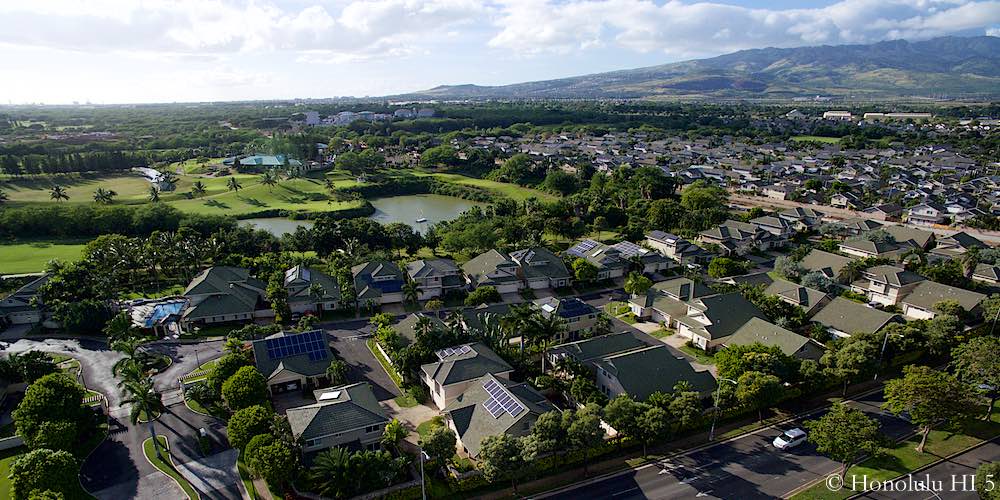 This is where it all started. Ewa Beach has been a settled town since the 1800s, with collections of residents here long before. As everything mauka of it turned into plantation land, it still remained its own entity. That longstanding existence resulted in a place with its own distinctive local culture and feel.

The closing of the farms over the 80s and 90’s suddenly made huge new Ewa Beach real estate suddenly spring to life, the build-up starting at that time and still going today. The point is that while Ewa Beach has gone through extensive expansion from the small town that hugged the shoreline, it has a history that runs through the entire place. It’s a hard factor to define, but it is undeniably there.

The first steps to the 2nd City began here, with projects breaking ground almost the moment the last harvest was finished. With that head start on Kapolei, it may surprise you to know that Ewa Beach has more new housing within it today. The latest is the headline grabbing name of Hoopili.

Over the coming years this neighborhood will add a very substantial 11,750 new Ewa homes, the first phase nearing completion already. More than a bedroom community, it will include substantial shopping & commercial spaces, multiple parks and 5 public schools. That has been the pattern of this eastern section of the 2nd City, new communities with their own leisure and recreation options, rather than the larger, centralized choices, such as big box stores, that characterize Kapolei.

In addition to a greater number of new residences, the styles – and lifestyles – are more varied, too. You have the choice of golf course communities like the luxury of Cypress Point, the affordable homes of Ewa Gentry’s Laulani, or the leisure lifestyle you get with the houses within the gates of Huelani. 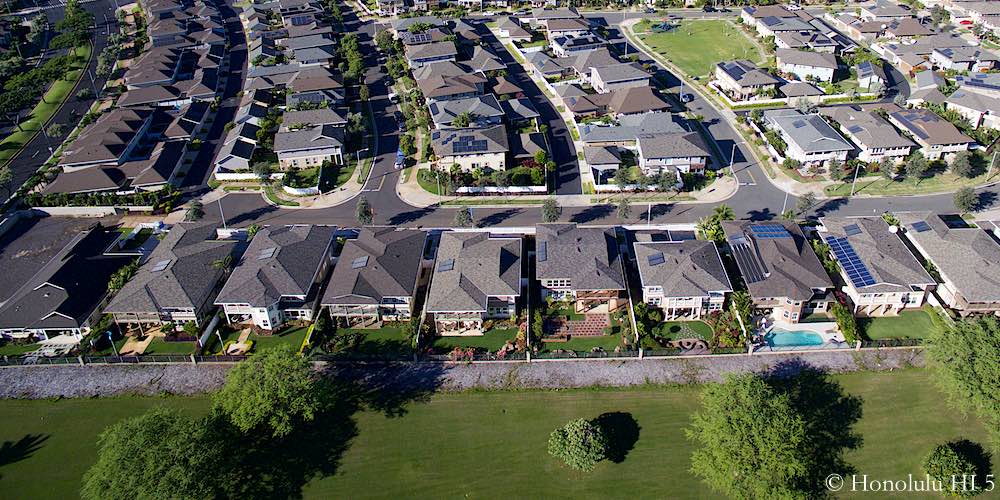 Then there’s the resort-living of the properties in Hoakalei, where you enjoy a private lagoon to play in any time. Next to the lagoon they’re now planning a $300M shopping, dining & entertainment complex, which neighborhood residents can walk, or golf-cart, to in a mere few minutes.

Together, these Ewa Beach neighborhoods provide a selection that Kapolei cannot match. For those seeking variety, Oahu’s real estate market can offer few rivals to this district.

The ‘Beach’ in Ewa Beach
It’s also often forgotten that only Ewa Beach offers the possibility of living near or even on the ocean. The Old Ewa Beach town dominates the shoreline here, but the newer areas of Ocean Pointe and, of course, Hoakalei make it easy to get to the sands. 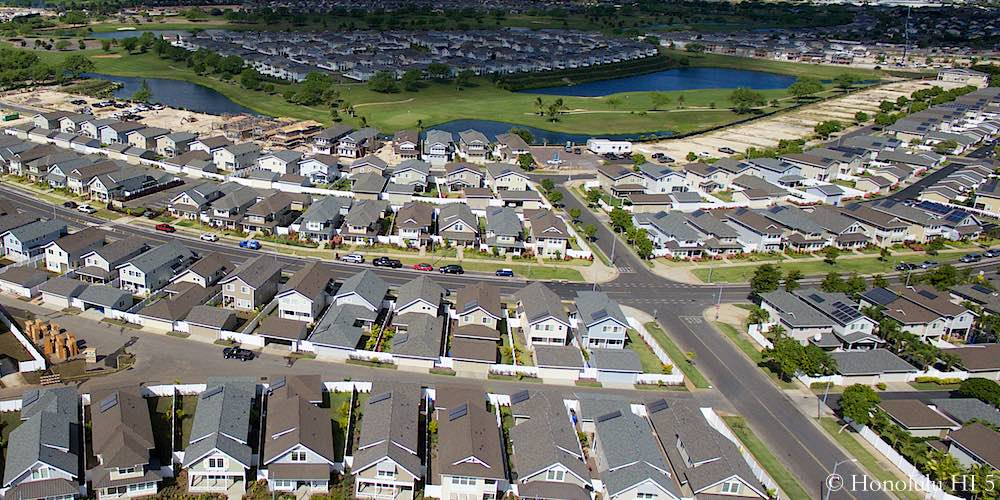 Taken together, there aren’t just more newer homes in Ewa Beach than Kapolei, there are more homes, period. While most of the attention has been on the western end of the pair, the eastern has plowed on, putting up residences that make it the dominant domicile for people in the Ewa Plain. It is here that you’ll find not only greater real estate selection, but wider, too.

The population lean to this side has resulted in a greater number of elementary schools, 7 in Ewa Beach to 5 in Kapolei and middle schools, 2 to 1 in that case. High Schools? They’re even currently, 1 each.

Finally, if affordability is important in your search for a residence, then a good place to start is here. Ewa Beach homes average out today to a pricing of $697K, giving you a $30K edge on Kapolei’s average of $727K. In the expensive Oahu real estate market, every little bit helps.

Made up your mind that Ewa Beach real estate is the way to go? Not so fast. You’ve only heard one side of the story, so stick with us. There’s a lot to love about Kapolei, too. 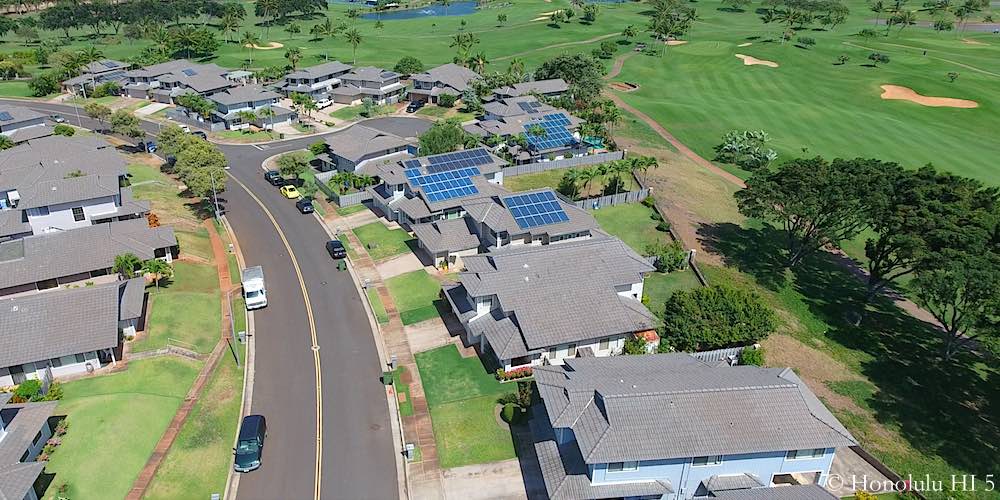 Kapolei is a complete modern creation, a city that sprang from sugarcane fields. Previous to the plantations there were no real settlements on its present lands. The lack of water sources until the 1879 discovery of artesian wells made inhabiting the Ewa Plain difficult at best. Due to this, Kapolei has no real history to it, though the area’s plantation culture and the presence of so many residents with deep local roots keep it truly ‘Hawaii’.

A tour of the central section of the city will make one defining feature leap out plainly. This is the shopping and entertainment hub for West Oahu, with some choices that even Honolulu does not have. Along with the big box retailers, like Costco, there are several large shopping outlets, such as Kapolei Commons and Kapolei Shopping Center.

You’ll even find a supermarket sized Down to Earth store, just one sign of the fact that there’s something here to satisfy every taste, not just the ones traditionally associated with West Oahu.

That all takes a back seat, though, to Ka Makana Alii, 67 acres of 100+ stores, restaurants, entertainment and even a Hampton Inn/Suites for visitors. There’s no mistaking its impact as it now holds the title of 3rd Largest Shopping Center in Hawaii.

Living in a home in Kapolei also puts you very close to the world-class resort area of Ko Olina. While that does make staycations easily accessible, you’ll benefit more from using the attractions there for more common reasons.

The magnificent Ko Olina lagoons have the kind of tropical charm and scenery that bring a wealthy clientele from all over the world. They’re also open to the public. Top chef dining experiences and the unique recreation options that only visitor-oriented districts offer are also available, too. 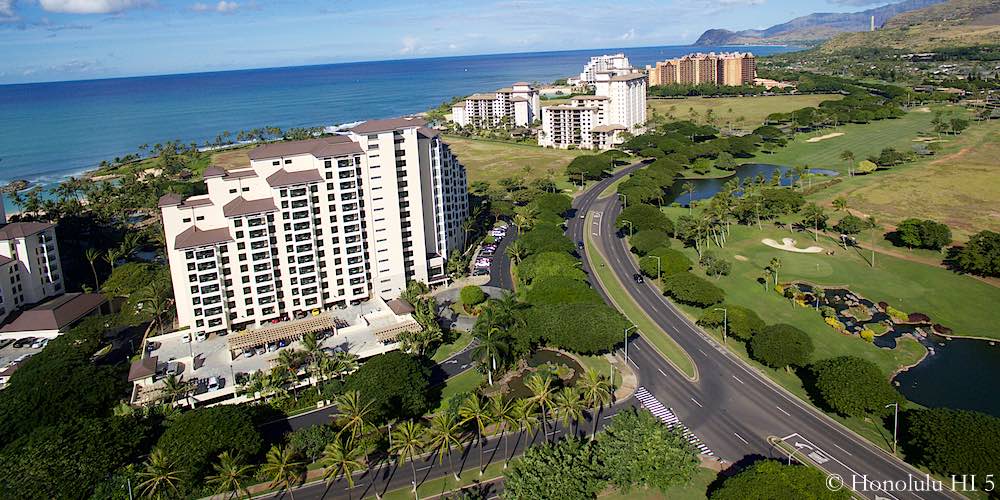 The best news of all with this is that Ko Olina is just getting started. A recently announced Atlantis Resort is expected to come, along with other leisure & vacation properties, which will lengthen the list of what you’ll be able to do, sample and experience only a few miles away. 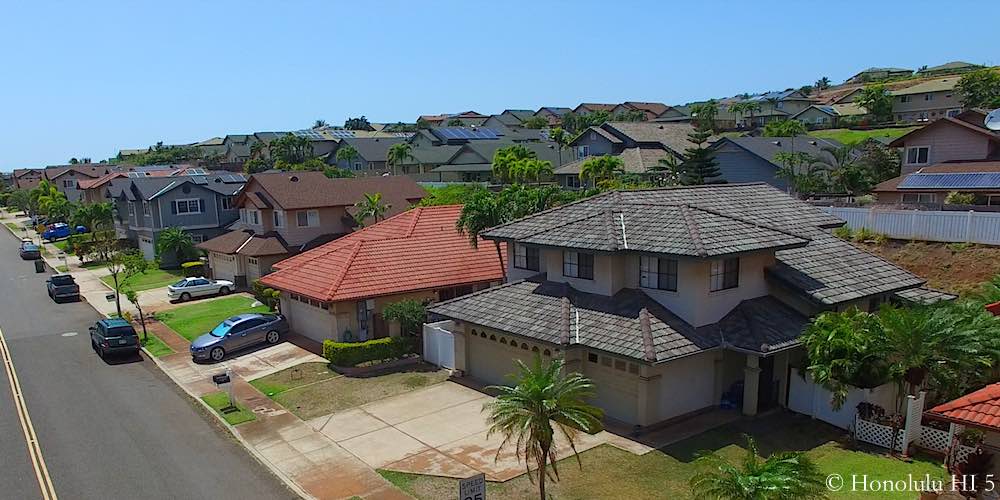 Even on days you can’t make it to those lagoons, Kapolei residents can enjoy something over their Ewa Beach neighbors – cooler temperatures. There’s no question how this difference can make practically every part of your day at least a little easier. It’s just easier to keep cool when you live in these zip codes.

That’s not the only element of Kapolei that will enrich most days compared to Ewa Beach. It also has many easily reached access points to the highway spread across town. Commuting is just part of the deal when living in West Oahu, so anything that will smooth even part of that journey to Honolulu and back each day is worth noting.

H1 goes right across the mauka side of Kapolei so that proximity, along with smart planning, puts the freeway well within reach for residents. The northward slope H1 takes from there places it even further from the more makai Ewa Beach neighborhoods, adding extra time before you can really get your commute started.

Before closing, we should again underline that Kapolei still has much to come. One of the biggest recent surprises was China Oceanwide, the investors behind the Ko Olina Atlantis resort, also announced a community centered around at least 1 golf course, with 2500 townhomes and condos, plus commercial centers as well. This development would take up the lands between Kapolei and Ko Olina, the separation between the two now erased. It’s an exciting time in the 2nd City.

EWA BEACH & KAPOLEI – CLEAR CHOICES FOR THE RIGHT BUYERS
The merging of Ewa Beach and Kapolei, especially as their borders have begun to blend together, has started to also blur what differentiates them. For many, understandably in Hawaii, the choice can come down to affordability.

Even that prime concern must be balanced against other needs. Families with small children will weigh the availability of schools, while others will consider where potential local jobs or business opportunities are more likely. Now, at least, you know some of the main selling points between the two sides of the 2nd City. Which would be your choice?