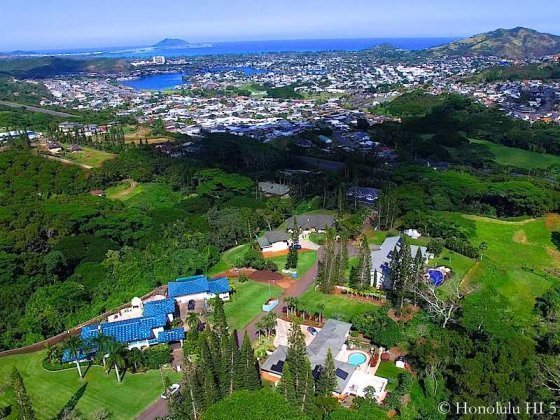 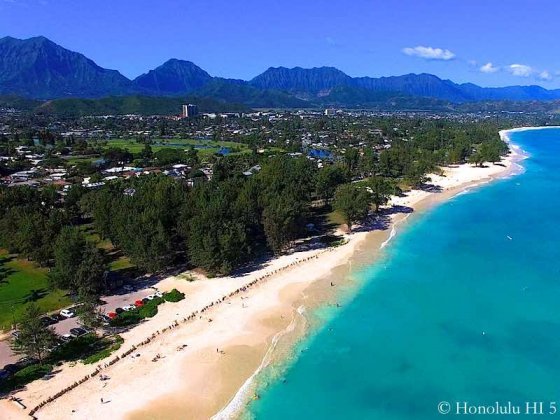 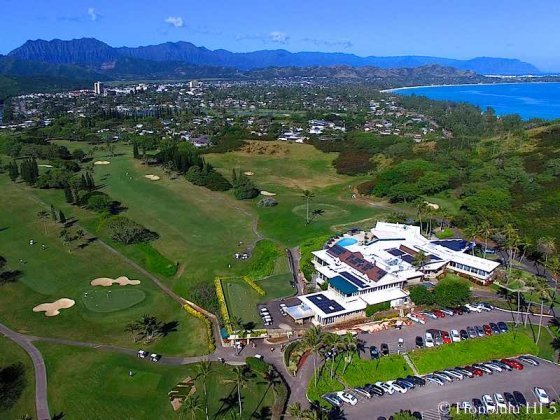 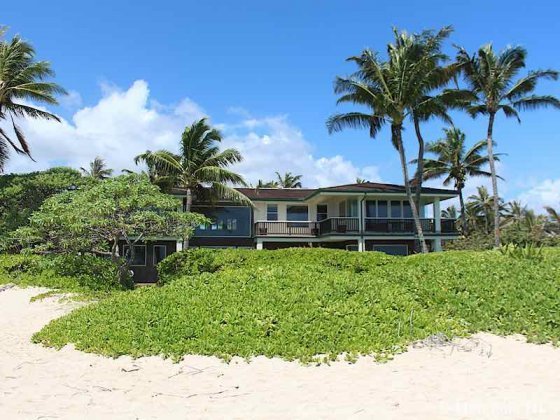 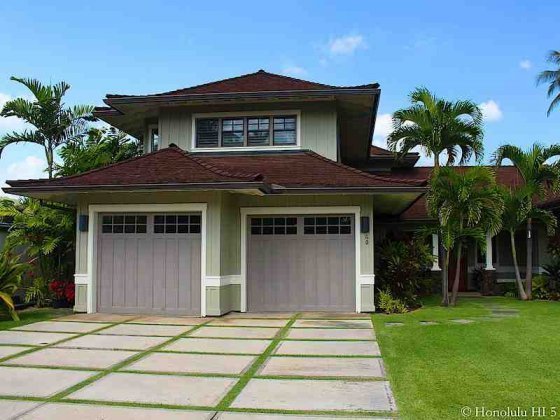 Kailua Videos
See our video flying above homes in Kailua and also our video of Kailua Beach Park.

About Kailua
Kailua is one of Hawaii's classic beach communities. Slower moving, quiet - yet lively - and defiantly low-rise in the face of the development that's overtaken so many other parts of the Island of Oahu. You will never mistake Kailua Town (the main shopping area of Kailua) for the built-up real estate in Honolulu even with a Target and Whole Foods plus three supermarkets and small strip malls.

Homes
Kailua homes for sale range from about $700,000 for a small home that needs some serious work in the Coconut Grove area to about $20,000,000 for the most incredible homes in Kailua Beachside (example: Throughout his presidency, Kailua Beachside was the setting for President Obama’s holiday retreat – an incredible private enclave of three luxury homes.) Although Kailua real estate has a wide price range and the neighborhoods are noticeably different, one thing they all have in common is a laid-back lifestyle vibe.

Below are some quick-read reviews of the real estate in Kailua - specifically several Kailua single-family home neighborhoods. Just click on the name of the neighborhood for our blog that contains much more detail. If you want more information on condos or townhomes visit our Kailua condos for sale page.

Beachside: The name alone tells you this is where you’ll find beach estates. Even better, these luxury homes line some of the most magnificent sands in Hawaii - Kailua Beach and are some of the most expensive beachfront properties on Oahu.

Residents are a mix of longtime locals as well as some of the wealthy, and even famous, who love the singularity of this town, along with the absence of anything even resembling pretentiousness.
Numerous celebrities own, or have owned, homes here. It's not unusual to see a famous face enjoying time in Kailua Town, dressed in the local uniform of slippers, shorts and t-shirt. They can blend in and, even if they don't, people here give them their space. Star-chasing is not pursued in Kailua.

Lanikai: Kailua’s exclusive beachside community, just south of Kailua Beach, features homes made even more valuable because there are so few of them. The views of the Mokulua Islands from the beach and the ocean views from Lanikai’s hillsides are unforgettable. In keeping with its exclusivity, the streets are narrow, with just one, a circle of sorts that gets you in and out of the neighborhood.

Kailua Beach and Lanikai have both famously held the #1 spot on Dr. Beach’s list of the top stretches of sand in the United States. That 'best beaches' claim is a serious one, considering the stiff competition Oahu has on its shores. It's a legitimate one, though. Dr. Beach finally changed the rules because of Kailua Beach’s dominance year-after-year. He now retires those beaches that have reached the #1 position on his annual list. However, both Kailua and Lanikai beaches remain in first place in the minds of all Kailuans and of those who visit these shores.

Kailua Bluffs: The houses here are contemporary in style, with a more uniform look than other areas. Significantly, it has underground utilities, uncommon in Kailua, so there's a clean, uncluttered look overall. There are a few duplexes, found on the western end of Kahako St.

In keeping with the locals' low-rise preference, Kailua real estate is mainly houses, with just a few condos or townhomes in the mix. The lack of high-rise buildings and the obvious attractions of the town have raised the pricing on homes for sale in Kailua.

Enchanted Lake: A well-known neighborhood, it encircles a freshwater lake. The lakefront houses look out on the calming waters. Only residents can use the small lake that eventually makes its way to the sea. Usage is limited to boating only – no motors. Kayaks are perfect.

Kailua Estates: Most lots are in the 10,000 to 16,000 sq. ft. range, which is large for homes in Kailua. These generous proportions extend to the wider streets as well. Kakahiaka and Awina Streets are especially notable, because of the canal that runs by them, giving some homeowners a backyard vista of flowing waters.

Kawailoa: The selling point for this small collection of homes is that they're right next to Kailua Beach Park! Some are built against the hillside, high enough to have incredible views of the Pacific Ocean and that #1 beach. Lots generally are 4,500 to 6,000 sq. ft. in size. Don't confuse this neighborhood with the North Shore neighborhood that has the same name.

Hillcrest & Keolu Hills: These two areas are very close together, both being hillside communities found east of Keolu Dr, above Enchanted Lake. Up here the breezes are cool and plentiful. The views are good, too, looking towards the town side of Kailua as well as the ocean.

Kalama Tract: If you know the area, you know that Kalama Tract's location along N Kalaheo Avenue puts it just one block from Kailua Beach! That makes for perfect access and the kind of real estate that often pays back on its investment. As a place to live, you'll enjoy a quiet, serene neighborhood where you'll brake often for ducks crossing the road. Everybody goes to the beach here (except for the ducks).

Kailua has successfully maintained its genteel small-town feel despite the overwhelming growth in development almost everywhere else on Oahu. While this has raised home prices, it has preserved a special character that evokes the Old Hawaii where life was taken in stride. There's an understanding that a faster pace doesn't necessarily improve the quality of the day.

Kaimalino: We travel to the far side of Kailua Bay, near Kaneohe MCBH, to find these large lots, typically starting at 10,000 sq. ft. The beaches are a little rockier, but that makes for a quieter ambience, and more privacy, with fewer outsiders coming to use the sands here. Some houses lie along the canal, while others sit directly on the oceanfront itself. This is where there is a secret place to quietly tiptoe across the rocks to see honu (green sea turtle) hatchlings.

Aikahi Park and Kalaheo Hillside: These two communities lie on the north side of the canal and Mokapu Blvd. In Aikahi Park, spacious homes have well-groomed lawns and the large lots are flat. Aikahi Park Shopping Center and Aikahi Park Elementary School, one of Oahu’s best, divide the two neighborhoods. Kalaheo Hillside is a bit more country, with homes that sit on lots that are mostly 10,000 square feet, many with ocean views. Most homes in both areas are an easy 10-minute walk to the beach.

Maunawili: Part of Kailua’s real estate, but the location makes it feels like it is sort of an area of its own, located between Kailua and Kaneohe. The dominant hue in Maunawili, unmistakably, is green. You live in the lushness of the mountains where life grows freely all around you. The cooler climes also bring more precipitation, which falls regularly, something locals love because it makes for crisp, fresh air and the rich, emerald green flora. There are some large country estates, which range from 10,000 sq. ft. on up to two acres and a golf course in the midst.

Although Kailua faces continued challenges ahead about its future, with so many developers eager to enter the city limits, if one had to place a bet, it would be that this town would be the one to stand firm. From a real estate perspective, this will raise home values, but, more importantly, it would prove that a special neighborhood like this one can be protected and preserved.


Kailua History
Kailua has been occupied almost from the first arrival of the Polynesian settlers. Archeologists believe that this was home to early Hawaiians at least 1,500 years ago. They lived primarily around Kawainui Marsh, subsisting mainly on fish and other seafood as the land could not be cultivated at the time. The community would remain small until the Ali'i (royalty) moved their Oahu center here from Waikiki in the 16th century. The numerous heiau (religious) sites that survived are a testament to the importance of the area.

Over the centuries, developments in land use and farming techniques occurred, revealing the area's agricultural potential. Sugar, taro and rice were staple crops, feeding a growing population. Starting in the 1800s, the focus would turn to raising cattle on the lands owned by businessman James Castle. His Kaneohe Ranch dominated the windward side of Oahu, covering a vast territory that was used as pastureland. In the 1940s, his son, Harold, would make a move that would change Kailua real estate forever.

In 1942, Harold Castle closed down Kaneohe Ranch, recognizing that changes were coming to Hawaii. This freed up thousands of acres of land where developers built the beginnings of Kailua Town. The Castles also donated large tracts of their land to schools, hospitals and churches to serve this side of Oahu, many of which still bear the Castle name.

Kailua homes, especially in the post-war years, sprung up quickly, creating a large community around the existing small town. Before the Pali Highway and its tunnels were finished in the 1950s, motorists had to take a slow, winding dirt road over the Koolau mountains to reach the Windward side. Finally, one could travel easily from downtown Honolulu to the Windward Side. Those working in the city moved to the country in large numbers as they were now able to commute – resulting in a thriving town that was soon to become a real city – albeit a laid-back beachy one – as more and more houses were being built.

Kailua is still going through growing pains today as residents try to preserve the small-town feeling in the face of development and tourism. Having two of the 'Best Beaches in America' doesn't help, either. Changes may come, but there will always be something uniquely Kailua: Life is just taken a little differently here than it is on the other side of the Koolau; and that makes all the difference.

Of course, there is a big difference between the Kailua of yesteryear and today’s Kailua when it comes to restaurants – once upon a time, there was one coffee shop in Kailua. Today, you can find all kinds of foods served at all times of day – everything from little sandwich shops to gourmet white-tablecloth fine-dining experiences. (Kailua Breakfast Restaurants, Best Places for Happy Hour in Kailua).

Decades ago it was just Liberty House (department store), the only place to buy men and women’s wear and beachwear. Now, Liberty House is gone and scattered throughout Kailua are many choices for the latest in high-fashion and beachwear for men, women and children. (Shops for Beach Wear in Kailua). 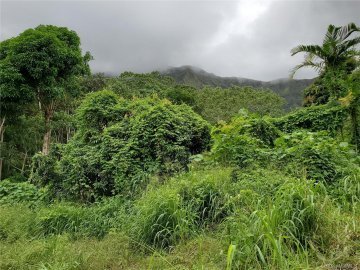 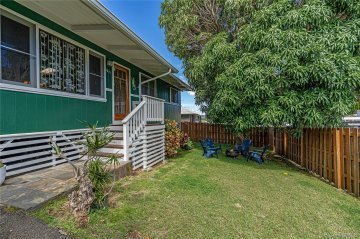 Sold3/30/'21
$1,350,000 (Sold Price)
445 Keolu Dr
4 Bd | 3 | 1,634 sqft
We need your email address, if you would like email alerts. Please Create Account - takes 1 min - or Sign In .
We exclude Leasehold data from this market analysis because Leasehold properties do not compare with regular Fee Simple properties.
We use median instead of the average because it depicts more accurately a central tendency to the sample size. Example: Take 5 numbers - 3, 5, 7, 9, 21. The median is 7 (the middle number) and the average is 9 (sum of all divided by 5).
We count days on market from listing date through closing date.