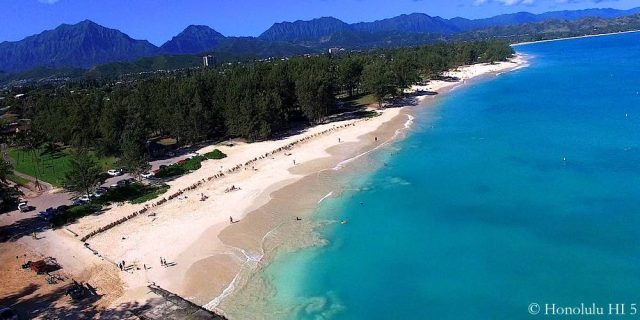 Kailua beachfront, and near-beach, neighborhoods are always toward the top for Windward Oahu home shoppers. That category is a good place to start, but a smart real estate buyer looking here needs to know more.

There are a collection of these communities that provide such prized lots, each with their own feel and selling points that are their own. We’ll take you on a tour of each, revealing just how far you have to walk to the Pacific on a sunny Hawaii morning, and what makes them stand out. When we’re done you’re going to be ahead of the Kailua beachfront real estate game and that’s a good place to be. 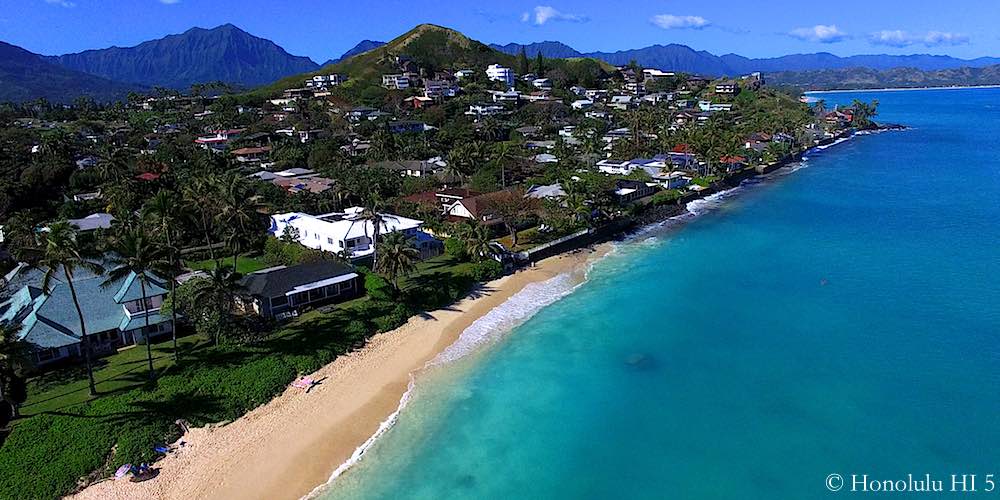 There’s obviously something VERY attractive about Lanikai. So much so that it has had a very notorious issue with illegal parking and traffic on holidays and most weekends. Locals can’t stay away and they always know the best places to go. This is one of them, no question.

It’s difficult to say exactly what it is about Lanikai Beach that inspires such devotion. Yes, the sand is luxuriously soft, the water crystal clear and the Mokulua Islands that sit off this coastline add something so visually satisfying, you wonder if the Hawaii Tourism Authority had them added to crown the scene.

Whatever it is, Oahu residents feel it unmistakably. For Lanikai home owners, this attraction is part of their experience daily. From anywhere in the neighborhood, you can stroll to the sands within 10 to 15 minutes at most. Some can just step off their backyard or lanai.

You buy a house in Lanikai because it is its own special beachside community, separate from the rest of Kailua, yet fully part of it. Within these streets you have something of an old-fashioned, yet exclusive, beach resort feel. The mostly luxury homes are on quiet streets, outside of the beach traffic, and the lifestyle focuses on one thing – the ocean.

With the hillside slant to the place, houses that sit more mauka can still have views of the water and the Mokes to drink in from their private retreats.

When the sun sets, the people of Lanikai watch the Pacific and listen to its lullaby, with little noise besides an occasional passing car or the sound of contented friends making their way back from the beach. As they say, ‘This is the Life.’ 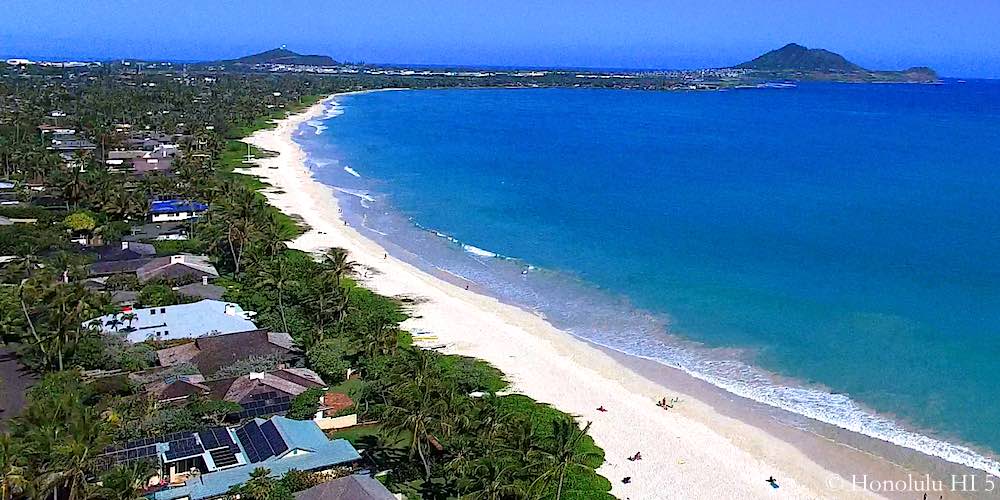 Beachside is the other bookend to Kailua Beach Park, taking up the roughly northern side of that area, almost the entire way to Kaneohe Marine Corps Base. It can justly boast that its residents have a mere block or two between them and the cooling feel of the water lapping at their feet.

Beachside homes are easy to map out, since they take up everything makai of N Kalaheo Ave, ending where it crosses the Oneawa Channel. Along with the residences on that side of N Kalaheo, the neighborhood consists of a series of short streets that run perpendicular to that main road, each ending close to, or at the coastline.

From classic Plantation homes to vintage beach cottages to large luxury homes, you’ll find them all on these individual avenues. All coexist peacefully and picturesquely due to a general unspoken agreement that structures fit in with the Kailua and Windward lifestyle. That means the conspicuous Beverly Hills style mansions are a No-No.

The same celebrated sands and peerless views of Kailua Beach Park lie off the backdoors of these homes, with one distinct advantage. While everyone is down there, your beach is sparsely populated, free of vendors and no traffic to deal with – and if you have to walk 5 minutes to get there, it’s because you forgot something and had to go back to get it.

Each one of the brief, makai-bound avenues that make up Beachside are their own quiet, little neighborhood. It’s like a personal driveway that’s a private ramp onto one of the best collections of sand on Earth.

KAIMALINO
The one settled piece of land between Beachside and Kaneohe MCBH is the neighborhood of Kaimalino. It collects the home above the Oneawa Channel as it curves to join the ocean and makai of Mokapu Rd.

These very large and luxurious homes in Kaimalino take up the northernmost part of this coast, but are separated from the rest by the Channel. The beach here is still sandy, but smaller than the stretches below the channel barrier, and sometimes it’s even rocky. Not the best place for wading, but it makes up in other ways.

It’s almost peninsula-like extension beyond the rest of the coastline gives many of the homes along the Channel wide open views that way that even Beachside homes cannot match. The gulf between Kaimalino and Beachside, combined with the vibrant green of the untouched lands above, cushions and insulates you from the tourist throngs and anything else that can intrude on a beautiful Windward day.

Those farthest back, beside Mokapu Rd will need about 15 minutes to make it down to the oceanside, but, again, that’s the outer reaches. Stretch out on the beaches here and you literally just might have it to yourself. Just you and what’s possibly the best vantage point in Kailua. 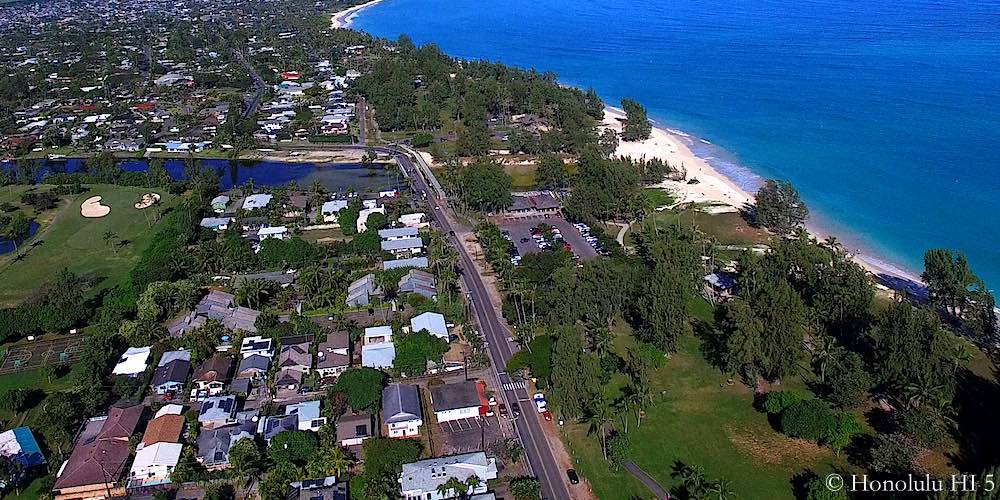 If we say that Beachside and Lanikai are the bookends to Kailua Beach Park, then the Kawailoa neighborhood is the book. Beginning at Kahapawai Market, it takes in all the makai housing, bordered further down by the marshland and Lanikai Elementary, its last bit being Kaneapu Place, which sits on the right just before you curve around into Lanikai.

Kept from the beach park by the distance of a block, at most, the longest part of your journey to the swells will most likely be the park itself. Living in a home in Kawailoa is like being inside the best club in town, watching the rest of the world trying to get inside. Lines of cars go slowly by, looking for a space, while you walk breezily to the beach everybody wants to be on.

Unique among the most makai Kailua beach neighborhoods, you’ll find not one, but two townhome communities, along with nice single family homes that mostly date from the 80’s onward. There’s a nice mix of original houses as well, though, with the Plantation style dominating those.

It’s a busier community, since you’re never too far from the high activity of the beach park, but would you really want to be any farther away?

KALAMA TRACT
With Kalama Tract we take a step back into the Near Beach Kailua neighborhoods. It begins on the mauka side of Kalaheo Avenue, extending back toward town just one or two blocks. It’s other sides are bound by Kuulei Rd and then Kainalu Elementary School on Kaneohe MCBH side.

Once across N Kalaheo Ave, the only thing between you and the beach is the shallow Beachside neighborhood. Set your watch and you’ll probably be wading into the surf in 10 minutes or less from your home in Kalama Tract.

This part of Kailua is known for larger properties, both in lots and the residences themselves. Best of all, you will find Old Kamaaina homes that have the dimensions and features that show they were built by a moneyed segment of that class. New, large mansions are present as well, so more modern tastes are provided for, too. This was, and remains, an upscale area.

True, it will take a little longer to get to the sands than Beachside, but chances are you’ll be compensated with a larger space to call your own. That’s nothing to sniff at.

KUULEI TRACT
Kuulei Tract is another area that is just on the other side of Kalaheo Ave, this time beginning right at Kailua Ave, with Kailua District Park and Kuulei Ave making up its other borders. Not very large, it is known for being a place that has preserved Mid-Century Windward Oahu.

Being smaller, you’d assume that the ocean is a simple stroll away – and you’d be right. Kailua Ave side residents can easily walk right past unmissable Kalapawai Market to the far, and quieter, side of Kailua Beach Park. Those toward the other end can do this as well, with a little more time tacked on, or use access through Beachside.

Most of the homes date from the 1950s to 70’s, when Kailua was almost purely a local town, with little of the visitor industry making it over here. The large, but single story, Kuulei Tract houses reflect the genteel lifestyle that thrived here more freely in those times.

As much of the town fights to keep that feel in the face of modern changes, Kuulei Tract seems to have figured out a winning strategy within their slice of it.

KAILUA ESTATES
Another that has kept Old Kailua alive is Kailua Estates. This is the only one of the profiled communities that links Kailua’s coastal area to its town center. It stands across from the beach park site on Kalaheo Ave between Kailua Ave and the canal coming out from Enchanted Lake. The mauka side borders the edge of that neighborhood.

For this town that’s a substantial stretch. In real terms, it plays out to a maximum of 1 mile from the farthest addresses to the sands. The walk is pure pleasure if you do have to make it, down Kailua Ave’s green lawns, swaying palm trees and a feel of excitement building the closer you get to the swells.

The homes in Kailua Estates are pure pleasure as well. Large floor plans inside numerous houses that come from the 1940s and 50s, true to the elegance and unhurried lifestyle of the times. They come with distinctly larger lots that bestow large yards and play areas difficult to find elsewhere.

For those who love the beach life, but want a home and natural space they can tend to and indulge in, Kailua Estates is a hands down winner.

COUNTRY CLUB KNOLL
Easily the smallest of all, this neighborhood is bounded on 3 sides by Mid Pacific Country Club and wetlands, the 4th taken up by Kawailoa. The lay of the land is a distinct incline, the houses higher up getting incredible views of the ocean and Kailua Beach Park in the bargain.

Being almost across the street from those sands in at least one area, the residents have a greater insulation from the busyness of the oceanfront, but can still be in the midst of it in minutes that never reach a 2nd digit.

Though not as large as Kailua Estates, the lots here give Country Club Knoll homes comfortable room between neighbors. The houses themselves are a mixture of the Mid-Century ranch houses with more recent constructions that tend to stick to the single floor guidelines. That’s one reason for the to-die-for views many have here.

This pocket of Kailua isn’t a marquee name, like Beachside, but that’s due more to its size and the fact that few ever sell once they buy in here. Can you blame them?

TIME FOR A KAILUA BEACHFRONT REAL ESTATE SEARCH
The beauty of the Kailua beachfront and near-beach communities is that they all have wonderfully easy access to the coastline that lives up to the hype. This is in-demand real estate, but why would it be otherwise? The proximity of the beach, matched by the charm, grace and comfort of these homes and their lifestyle is a bewitching mixture. Few can resist it, not even you.